We have been buying honey supplied by a local producer, Michel Henry.  In fact we discovered that he lived very close to us and we were able to make his acquaintance and were invited to visit his hives.

Hives in the garden

The entrance to the house is very discrete but once inside a beautiful well-tended garden opens out and tucked away on one side are the beehives.  He keeps the black honey bees that are native to France.  As he talked his passion for bee keeping became obvious and he was happy to answer all my questions.  He has been keeping bees for twelve years and it is a hobby that has grown over the years.  He started with one hive and when one year the honey that he had harvested did not last the family over the winter he decided to add more hives.  Now he has twelve hives.

One of the hives is equipped with a glass top so I was able to take a peek inside without troubling the bees. 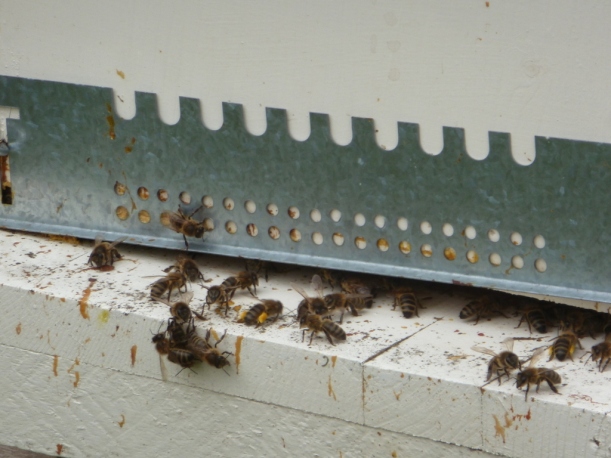 At this time of year there is still a good number of flowering plants in the area and on the day of my visit the ivy had just started flowering.  There are large quantities of ivy flowering in the woods nearby. 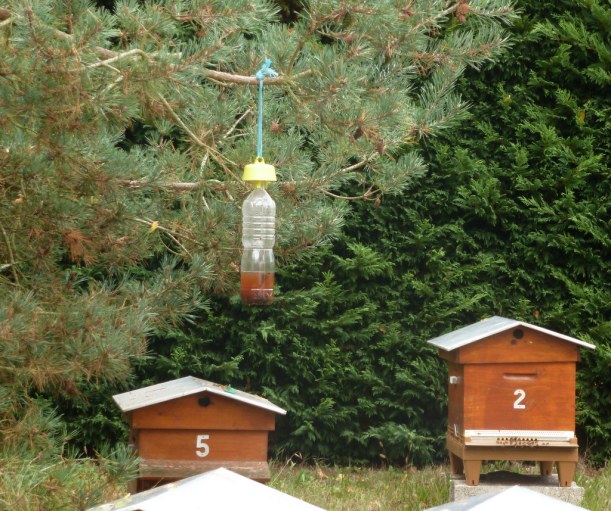 I mentioned that I had not seen any Asiatic hornets since I had trapped them in the spring.  Unfortunately they seem to target the hives as one swooped down and took a bee as we watched.  Michel explained that he has to watch helpless as they sit on a branch out of range and chew the head, legs and wings off before taking the body back to their nest.  He was quite surprised to see one attacking so late in the season as the bees are used for feeding the hornet larvae.  Later in the season the hornets would be more likely to try to steal the honey, especially from weaker colonies.  Michel keeps a large spade handy which he uses to swat them with.

He uses the hornet trap constantly and when he discovered I had success with mine in the spring he gave me a bottle of his special lure which he makes himself from bee by-products and which he says will prove more efficient than my beer and fruit jam concoction.

Apart from the other hives Michel possess another hive which he does not keep for its honey.  He allows the bees to use it like a wild hive.

He explained that the bees are capable of surviving cold weather but dampness is a problem, so he protects the old hive with a plastic tub and keeps it under the shelter of a tree.

I was surprised by the old hive and straight away thought of some of the pictures of hives portrayed on honey labels.  This was the shape of hives I had seen drawn in old books when I was a child.  He explained that these hives had no supers and would have to be renewed annually and he doubted if anyone would be able to make them any more.

He said they were made from straw bound together with bramble.

This hive belonged to an old uncle of Michel and by back calculation he reckons it must be about eighty year old.

This one he believes to be a little younger and he saved it from being burnt as rubbish when a house was being cleared out, although many others were destroyed.

There is something very homely about the old style hives.  I am impressed by the neatness and care that went into their construction.  I would have loved to know how anyone could make something like that out of straw and brambles.

I did a quick internet search and found what I was looking for, unfortunately the commentary is in German but the film speaks for itself.  It does last for fifteen minutes but I found it fascinating.  I think they cut young willow to use as the binding material but perhaps someone could enlighten me here. http://www.youtube.com/watch?v=-gT-VeHAFIQ&feature=mfu_in_order&list=UL 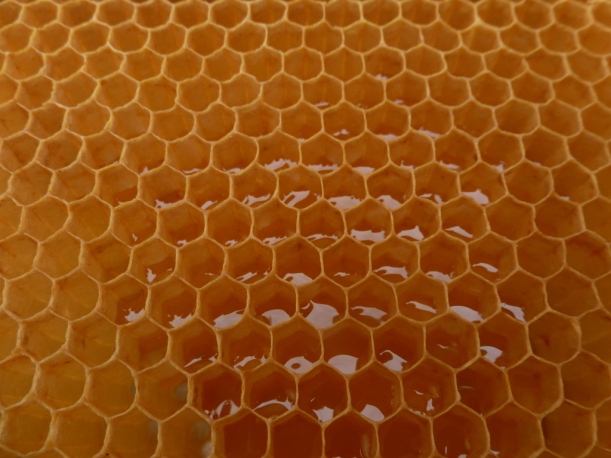 It was such a lovely visit.  He showed us equipment for extracting the honey and testing that there is not too much moisture in it, inside his spotless centre of operations.

He asked me if I intended to start keeping bees.  I explained that I was very interested in Bumble bees and asked him if he knew of anyone else that might be interested.  He did not, and mentioned that at one of their regional bee keeping meetings someone had brought a Bumble bee along for identification but no-one had been able to help.

I also explained I went back to the UK for short periods from time to time.  He said that should not be a problem and on the financial side beginning bee keepers often borrow equipment.

I must admit I am greatly drawn to bee keeping but I would still have to learn a lot more before I took the big step.