It has been a dull start to April.  Heavy clouds hanging over the garden dulling the colours of the flowers and keeping the bees in their nests.

I shouldn’t complain; the north of France has had snow and we are only suffering from a lack of sunshine and below normal temperatures.  It has reduced my walks as I am more tempted when the sun is shining. 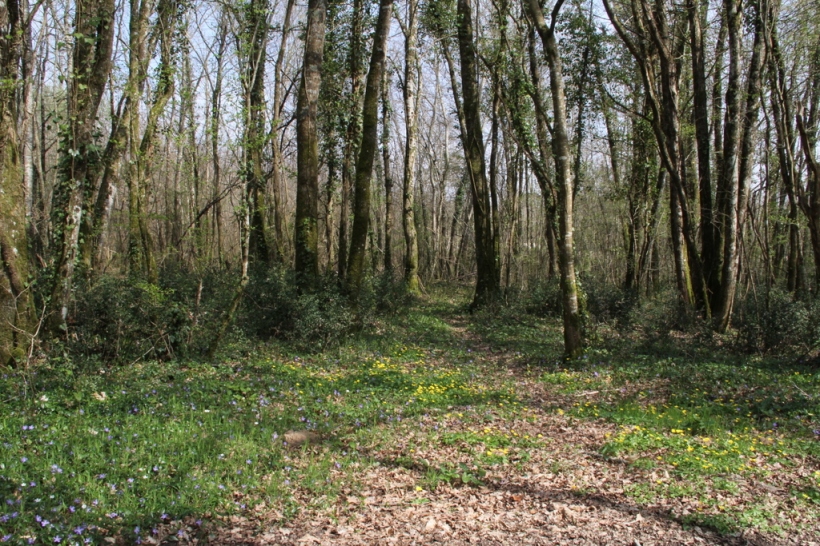 The trees are budding but the sun easily reaches the ground bringing out the spring flowers.

The violets are everywhere but I haven’t found any perfumed ones yet.

The wild geraniums are plentiful.  Unfortunately, they are difficult to tell apart from the perennial geraniums I have planted in the garden and I cannot always remember where they are so it makes the weeding difficult.  I am very fickle, outside the garden I admire them and take photographs: inside they get short shrift and are summarily removed.

I must admit that the common name, Cuckoo Flower, was right on target as I heard my first cuckoo just days  before seeing the flower.  The French name for the flower is La cressonnette ou cresson des prés as it resembles cress.  It is reputed to be edible and can be added to sandwiches to spice up the flavour.  I have never tried this so I cannot recommend it (yet).

The Pulmonaria is everywhere and is enjoying a spring that has been wetter than usual.

I am always surprised at what grows under the vines.  The vegetation is controlled under the vines in this area by spraying but come spring a variety of plants appear undaunted.

Dandelion and bee with pollen

My favourite weed at this time of the year is the dandelion.  Its pollen is a magnet for the bees.

Last year I managed to take many photographs of beautiful bees on the dandelions and other flowers and my winter task was to identify them.

Another bee on dandelion (Halictus ?)

Ah, the innocence of ignorance.

I have not identified most of them but I think I have got this one that I saw on the first of April this year.

If you will note, this little lady has a longitudinal slit in her last tergite.  A sign of the Halictus I have read.  I find identification frustrating, you try for a wing shot to see if the venation pattern will be useful and then find out that a rear end photo would be more useful, anyway she kept her wings folded too. 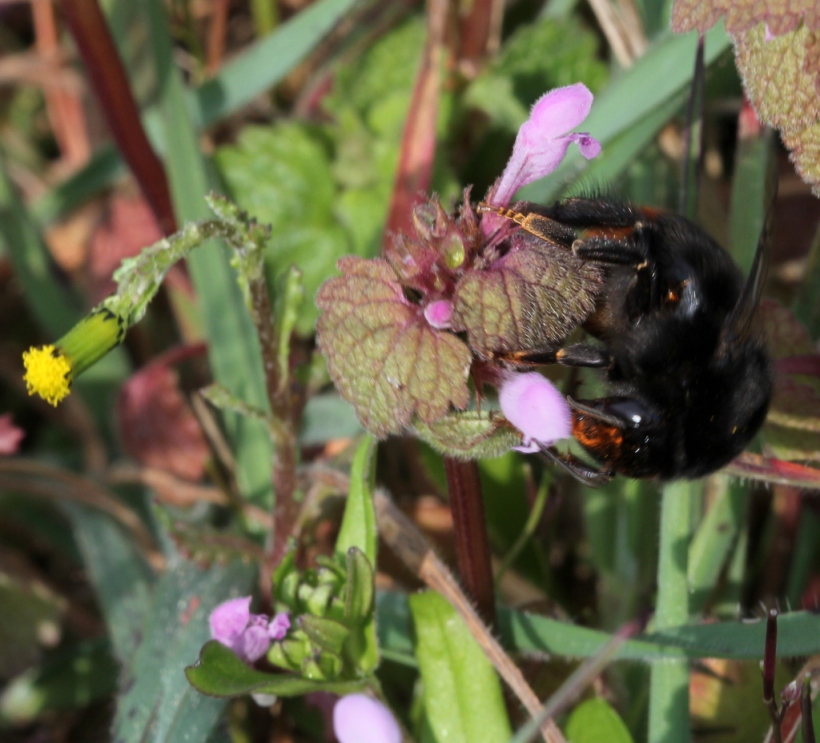 At least I have got the bumble bees that are a lot easier to identify.  The white-tailed are the most common around me and I am still seeing the queens frantically patrolling at ground level looking for a nesting spot.  These are obviously the late risers as I have already seen my first worker, so someone was quick off the mark.

The white-tailed queens are very big and can be told apart from their smaller workers.

I had never noticed  the Mining bee nests in the paths before.  They must surely have been there last year but I must have stamped over them unaware.  Now I see them where the agricultural machinery hardens the paths.  I suppose the ones built on the edges must do better than the ones that will be compacted by the tyres as the seasons pass.

I know the eye spots on the butterflies are reputed to deter predators but I had never noticed such a striking resemblance to a fox face as this photo presents.  Does anyone else see a face instead of butterfly wings?

I am waiting for the sunshine which has been forecast to return late next week.  I feel very much like hibernating until then.

39 thoughts on “Beginning of April”