I was very fortunate on my last trip back to the U.K. to be able to visit the Savill Garden on a beautiful sunny day.  In addition, they are exhibiting sculpture in the garden between the 1st. September and 31st October 2014 and I was interested to see how I felt about sculpture in gardens.

There is a bronze pheasant running across the grass in the first picture which is quite in keeping with the garden as there are real ones here too. 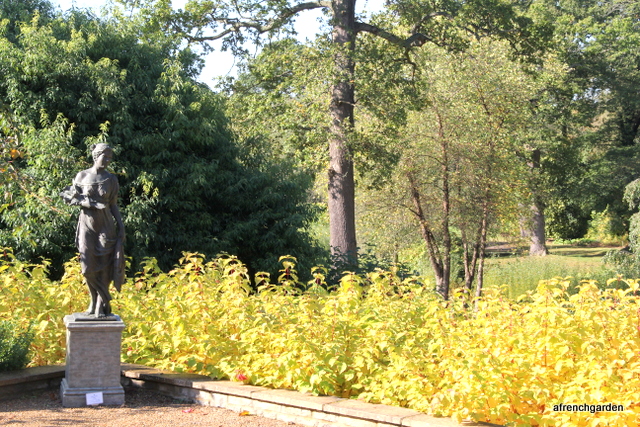 The next sculpture I passed was “Flora” who was beautifully set against the background of the autumn woods.  She is much too grand for my garden but the sculptures are for sale.  I am not sure how I stand here as I am not wanting to advertise them but if you visit the garden you can see how many copies are available and what the price is as they are labelled.  You would need more than two thousand pounds if she is just the perfect addition to a corner of your garden. 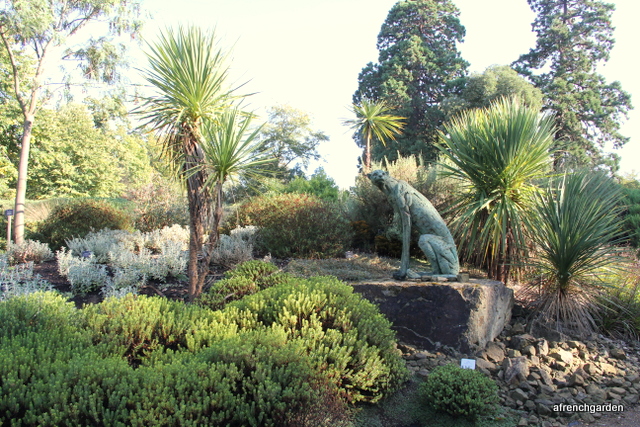 This cheetah, made out of bronze/iron resin, is almost half the price and perfect for the garden with an African savannah feel.

I was more interested in these Hibiscus trionum which were flowering profusely in a rather shady part of the garden.  They are also called Flower of an Hour as the flowers only last a day but the abundant flowers also leave attractive seed heads.  I would have thought they would have preferred a sunnier spot and I want to try them in my garden next year.  They are annuals or short-lived perennials and best sown annually from seed. 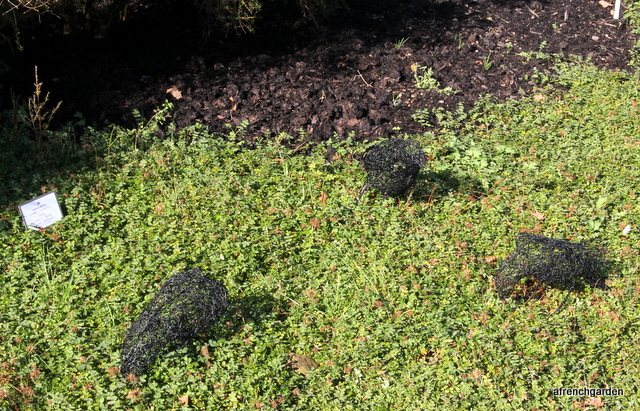 Not all the sculptures were over a thousand pounds and these black wire mesh crows could be bought singly or as a set of three.

The Roe Buck and fawn in bronze resin did not have me fooled as they rested near a screen of greenery. 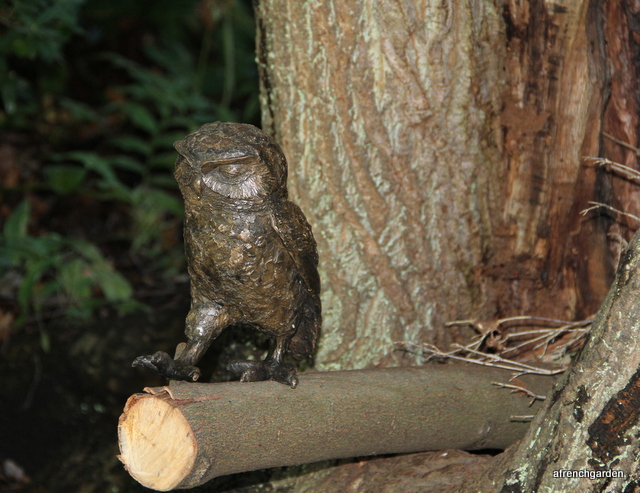 I do not have an artistic nature but I was surprised at the pose of some of the statues.  This little owl in bronze resin had been placed in a beautiful old tree but perched on a piece of wood totally foreign to its environment.

I have my favourite plants in the garden now and I was heading for the temperate house and the Mahonia X Media “Charity”.

I was not disappointed as this beautiful plant was in flower and full of honey bees and bumble bees enjoying the nectar in the sunshine.

Close beside the Mahonia there is a Magnolia tree with surprisingly rose red seed pods, much different from the seed pods I get on my Magnolia so I checked out its label.

I mentioned to my husband that I never knew that another name for Magnolia was Champion tree.  It was not until I got home and looked into it further that I discovered that it is this particular Magnolia that is designated a Champion Tree because it is a registered tree.  As you can see it has been recorded and measured in 2010 and you can follow the link to learn more.

We were very taken by the beautiful walnut tree that was dropping its ripe fruit, but when my husband accidentally stepped on one we noticed the different odour given off by the green case around the nut.  Checking on the label we noted that this is a Juglans nigra, or Eastern Black Walnut which is native to eastern North America and not the Juglans regia that I am more familiar with.

The fruit looks just the same from the outside but the shells are harder and more difficult to crack than the European walnut.  I would imagine the flavour would be slightly different too but I have never tasted one.

Close by is another favourite tree, Arbutus arachnoides.  I find its peeling bark more attractive than Arbutus unedo , the strawberry tree that is native to France, but I have never seen the arachnoides variety on sale. 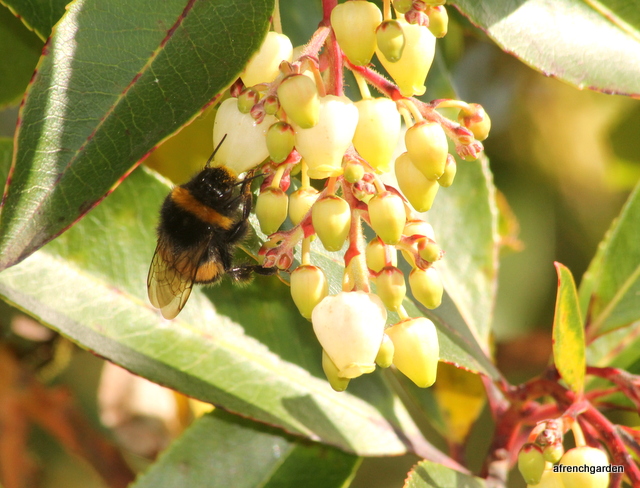 The flowers look exactly the same and the bees were feasting on them gratefully. 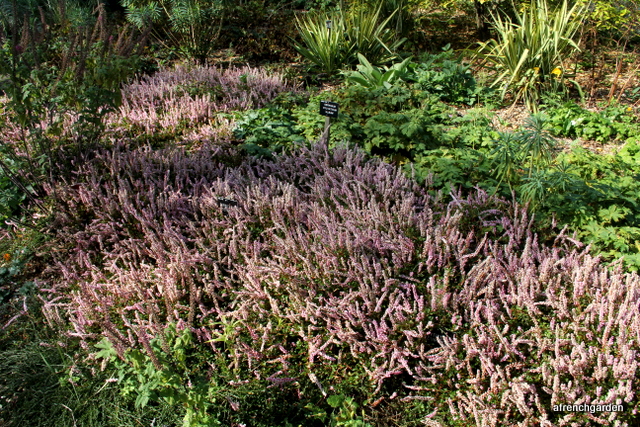 Another flower attracting a lot of attention from the bees was the Persicaria vacciniifolia.  I would like to have a bank of low flowers giving colour in the autumn in my garden,so I treated myself to a Persicaria to take back with me, but it was the Darjeeling Red variety that I found. 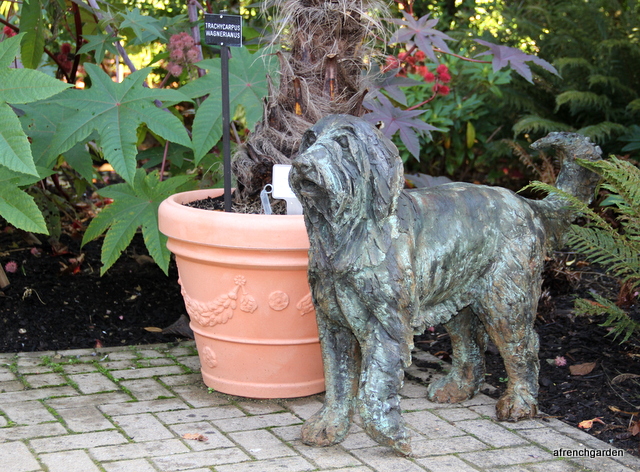 This “Shaggy Dog Story” in bronze resin is the ideal solution for the gardener with allergies and at just over a thousand pounds must work out a lot cheaper than the real thing counting food and vet bills.

Some of the sculptures were in metal.

A metal dragonfly hovered over the waterlillies. 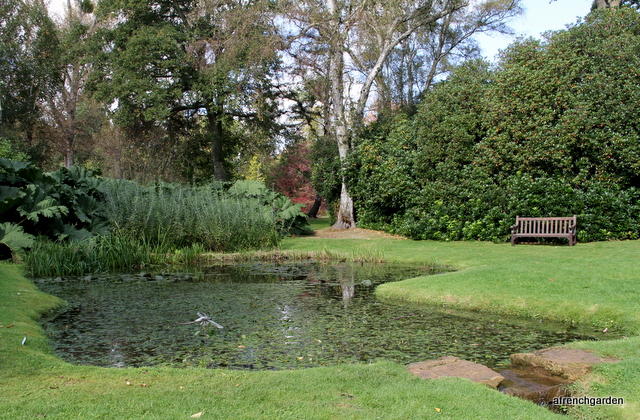 This picture gives an idea of the scale and positioning of the dragonfly. 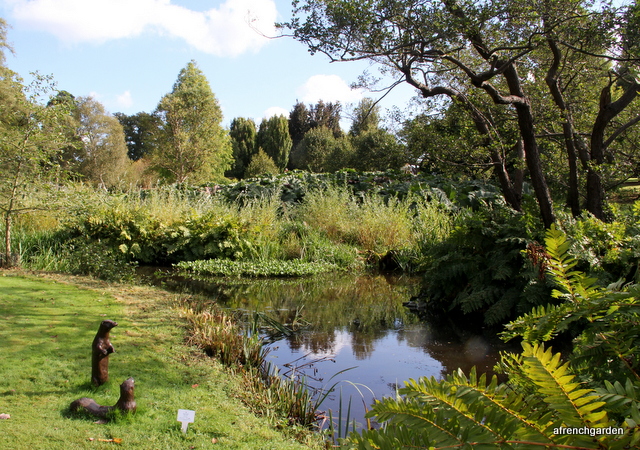 With gardens like this I would not feel the need of any man made enhancements.

But perhaps this “Pouncer” would add some drama. 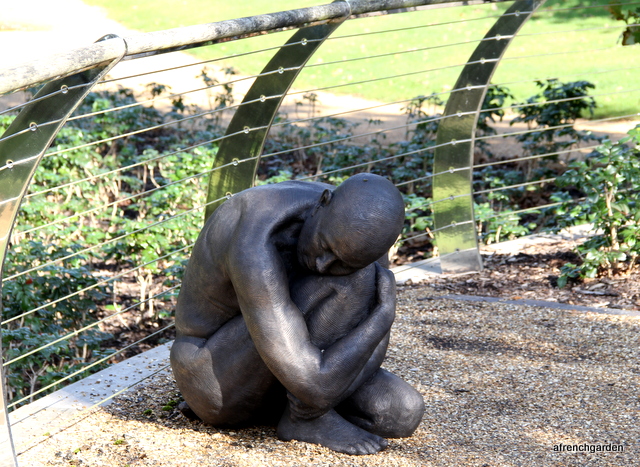 Or the “Self contained Man” might provide a centre point, although I find his positioning here beside the metal railings far from sympathetic.

I preferred discovering flowers and plants in the garden that are new to me like these tall yellow Ligularia fischeri, “Cheju Charmer”. 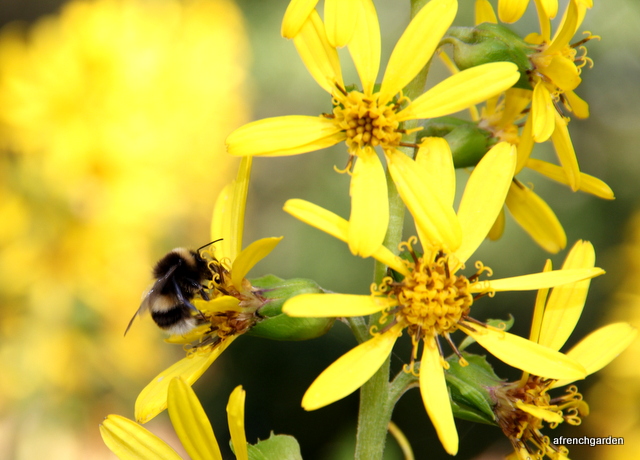 And it is not just because the bees liked the flowers but I think they would appreciate growing in a garden with moister soil than I could offer them. 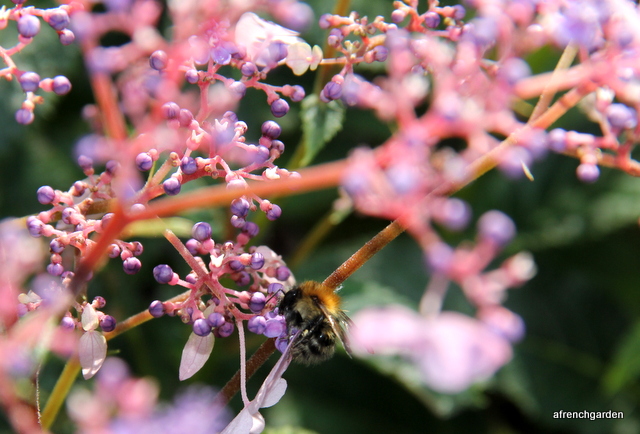 It is just sheer coincidence that this photograph of Cardiandra formosana “Crug’s Abundance” happens to have a carder bumble bee in it.  I was taken by its colours which are so different from the usual autumn colours.  Another plant for my wish list.

It was such a beautiful visit and perfect timing to see what can be done in a garden in the autumn.