While in the U.K. over Christmas I received a comment on an old post “Water, water everywhere…” from last February 2014.  Paul wrote:

The amphibians that end up in your well are trapped, in a short space of time they will drown, it would be good if you could help them out via a long reach net of maybe have some sort of ramp in place, they are certainly not in their element in there as you suggest. I would also suggest that you put some polystyrene sheets ( floating) 18 inch x 12″ in the well the animals will climb on them, and you will have fewer drowned amphibians.

Hi, interesting images, thanks for sharing. The amphibians are getting trapped in the well, and by far the majority of them will be unable to exit themselves. Some will have been trapped for longer than others, and individuals may tuck themselves away in unimaginably tight spots, undetected for the majority of time. The pair of common toads in the image with the marbled newts are both underweight, and the fire salamander depicted in the final image is emaciated — amphibians are also capable of surviving incomprehensively (at least for us) long periods of time without food, this particular individual may well have fasted for a whole year. For the amphibians, removing them and placing them in thick vegetation that has connectivity to further suitable habitat would be their best chance of survival. Taking measures to install a smooth sided barrier fence with an external overhang to prevent amphibians continuing to be trapped in the well would be the way forward for the amphibians. Best wishes, Peter Hill (Habitat Creation/Restoration officer, Amphibian and Reptile Conservation Trust) http://www.arc-trust.org

I must admit that I was panicked but surprised at the comments.

One point that I am not sure that they have understood is that it is an old well that has been filled in by previous occupants of the house and the first time that we had seen an appreciable quantity of water in the well was during a very short period in 2015 due to exceptional weather conditions.  Even then the water was not deep and there were refuges for them.  We have never seen any dead bodies nor have experienced any smell (it is just beside where we take our morning coffee on fine days.) 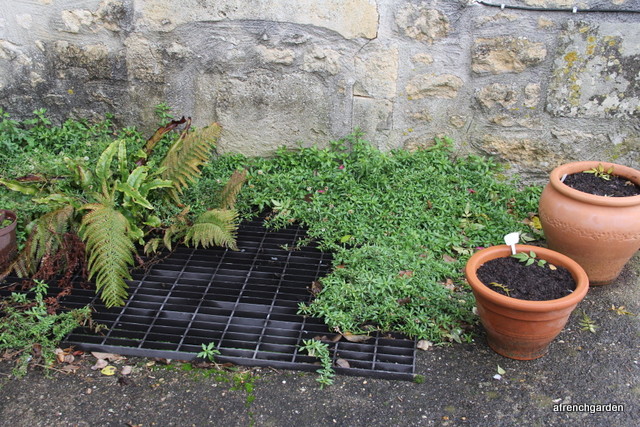 The well is safely covered but that was to protect humans entering and exiting the house.

However, we have acted on Peter Hill’s advice and my husband went down the well today.  Yesterday, after a cold period the temperature was up to 14 degrees and today it was the same so we thought it safe to save the toads. 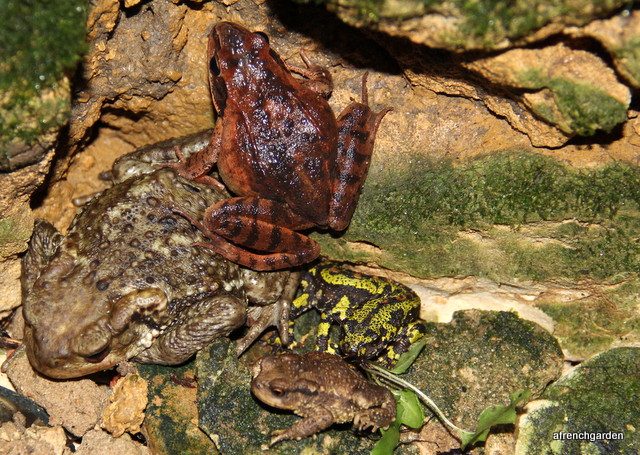 There were no bodies but there were two common toads, a frog (Rana dalmatina, I think) and lots of marbled newts (Triturus marmoratus). 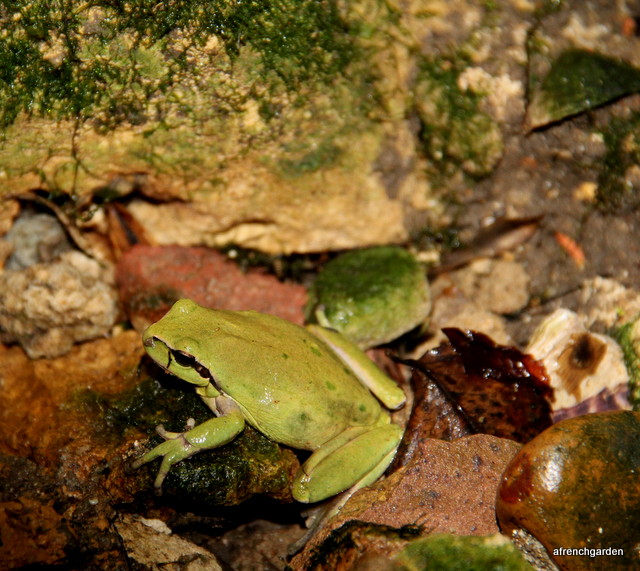 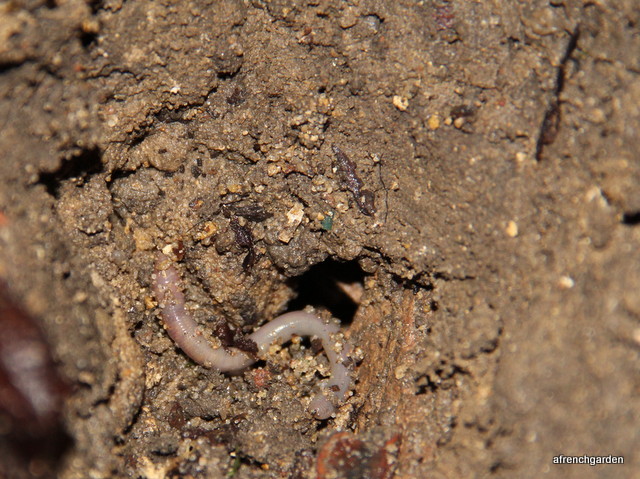 What was very interesting was that among all the debris at the bottom of the well my husband noticed two or three worms!  If my husband could spot them, I imagine that the other creatures are better adapted to find such juicy morsels than he is. 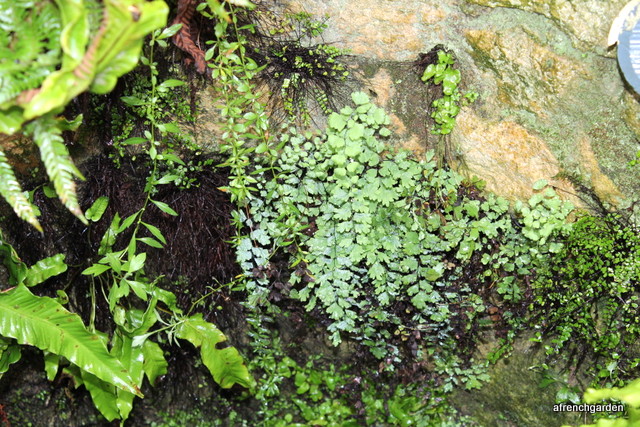 It is also not possible to show you how many “midges” or very small flies were active amongst the lush growth of ferns on the well sides.  In addition, I saw a large white moth make an exit as we lowered the ladder down the well.  I am not convinced that the well is such a barren an environment. 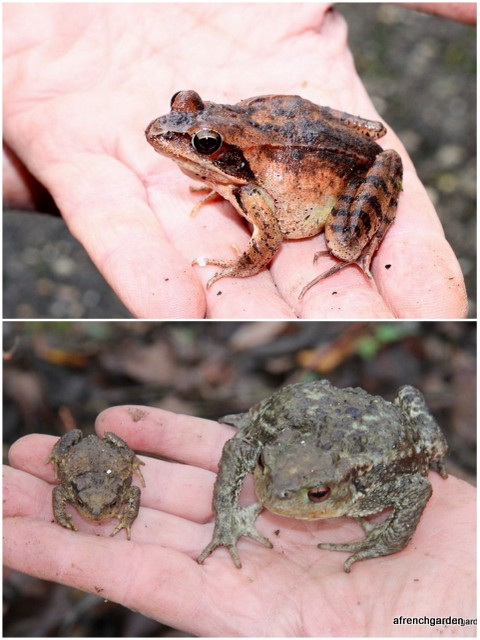 The two toads and the frog have been removed. 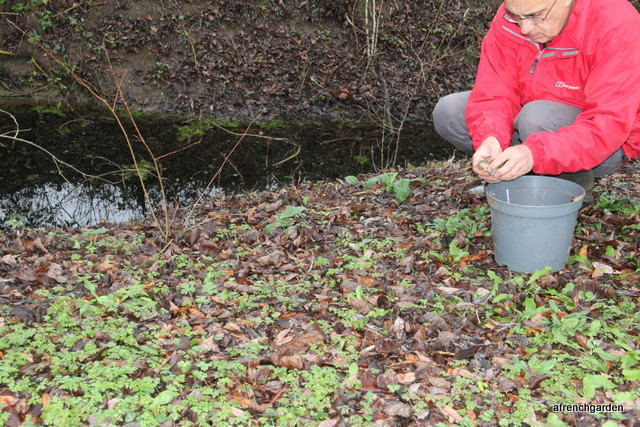 They have been released into the end of the back garden near the river Seudre. 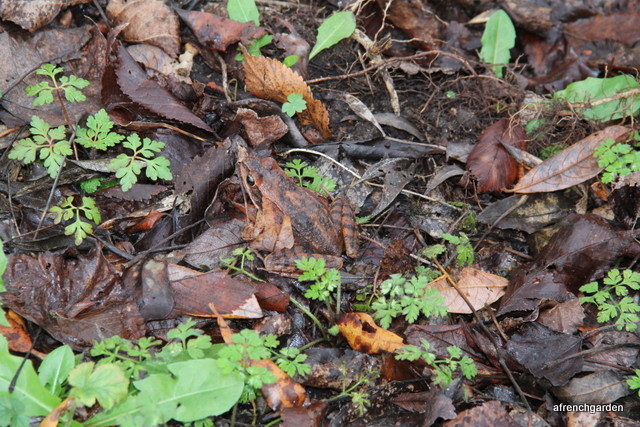 I was very impressed by the camouflage – it was certainly, now you see me, now you don’t. 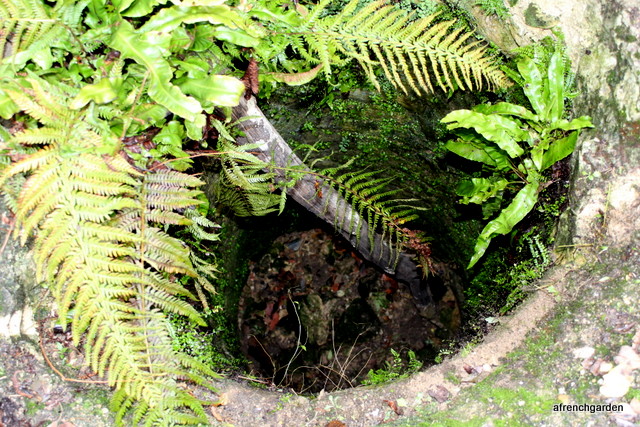 The well has now been fitted with a log escape route.  There is no need for floats as the level has never been high enough, even in extreme conditions, to leave them completely stranded.

There was no sign of the Natterjack toads or the salamander that we had previously seen but thankfully no bodies either. 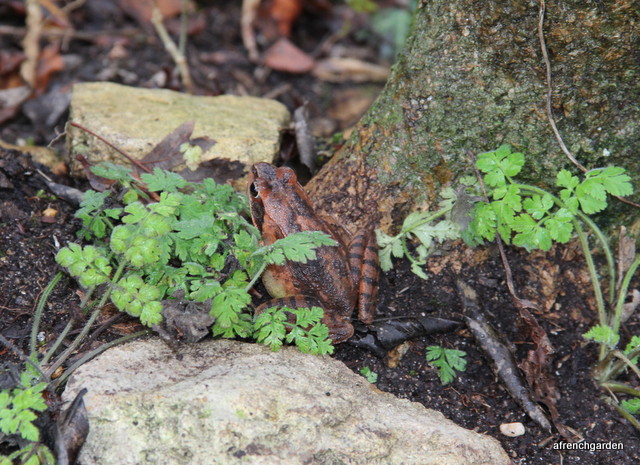 I just wonder if the frog is making a break for freedom or will it end up crushed on the nearby road cursing the humans that turfed him out of his safe resting place.