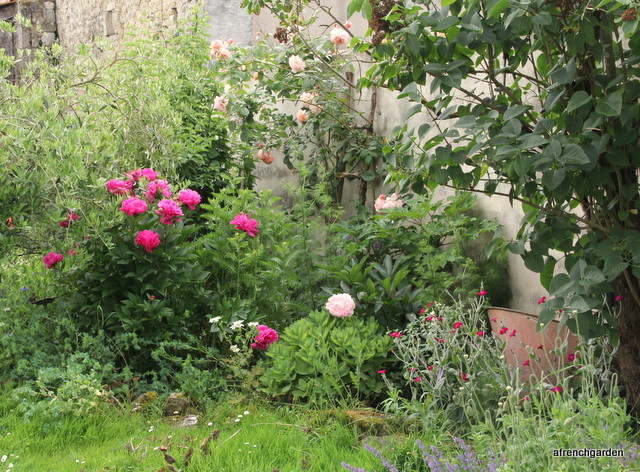 Back home and it looked as if I hadn’t missed as much of the flowers as I thought I would.

The roses are still flowering.

And the Arum lily at the back looks as if it is set for world domination again this year.

The back garden looks good from afar.

But when you look closer into the borders, the weeds have out-competed the plants.  Especially in my new border where I have been wise enough to mark my new plants with a stick, otherwise I would lose them to the competition. 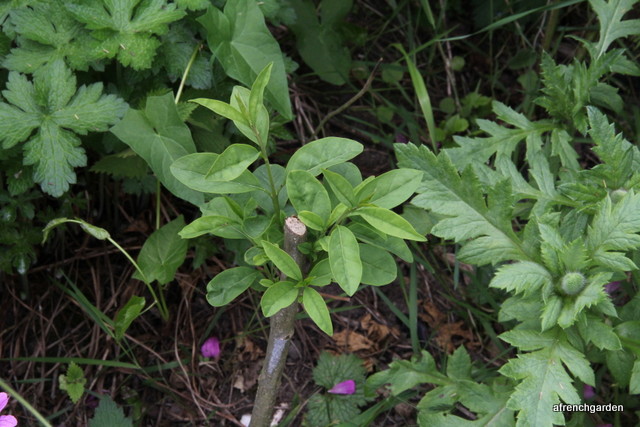 I had to put in so many sticks beside the plants that I named it my “stick garden”.  I prefer to use sticks from the trees in the garden to lessen the unpleasant impact but I had not counted on so many of them sprouting so vigorously like this one! 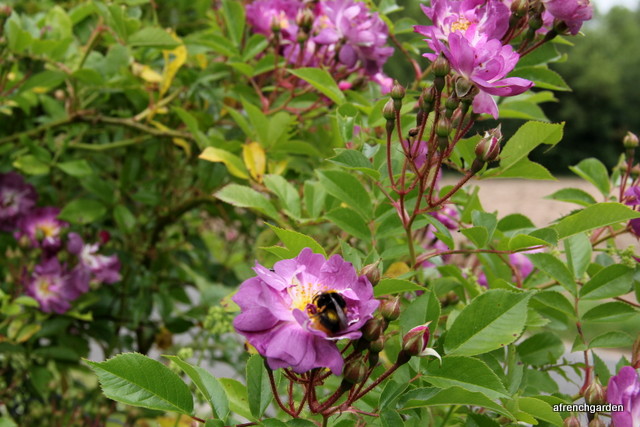 I have spent most of my days weeding since I have returned from my holidays but I still like to watch my bees like this early bumble bee in the Veilchenblau rose.

It is not always that the bumble bees and honey bees like the same flowers, however, the Veilchenblau pollen is a favourite with both of them.  The pollen is this lovely yellow/orange shade.

The bees have got competition from the chafer beetles so pollen gathering is done rapidly in the morning and there is plenty to go round for everyone. 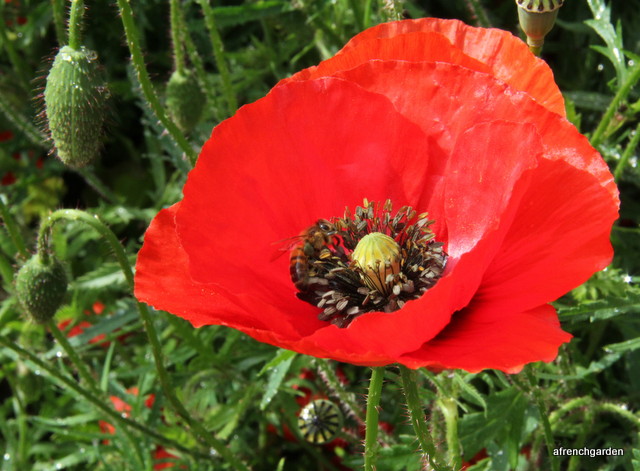 The poppies are another sought after source of pollen, even if it looks as if they are carrying little sacks of coal.  There are some poppies with yellow pollen but if anything the black pollen seems to be favoured by both the bumbles and honey bees.  This means that by the afternoon the poppies are in a sorry state with the stamens completely decimated. 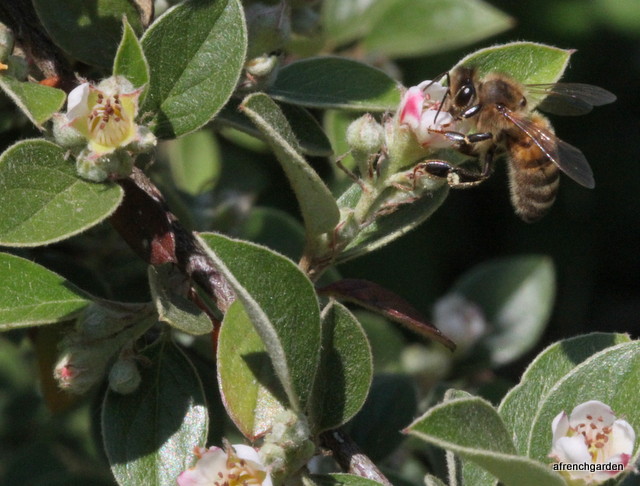 Another joint favourite of the bumbles and honeybees at the moment are the tiny flowers of the cotoneaster for their nectar.  I have seen a lot of hornets, both Asian and European on the cotoneaster recently.

I had never noticed peonies being very popular  with the bees but these little wild bees like this one’s pollen and there is something more.

I presume this is another type of chafer – more furry and cuter, but I have never seen one before. 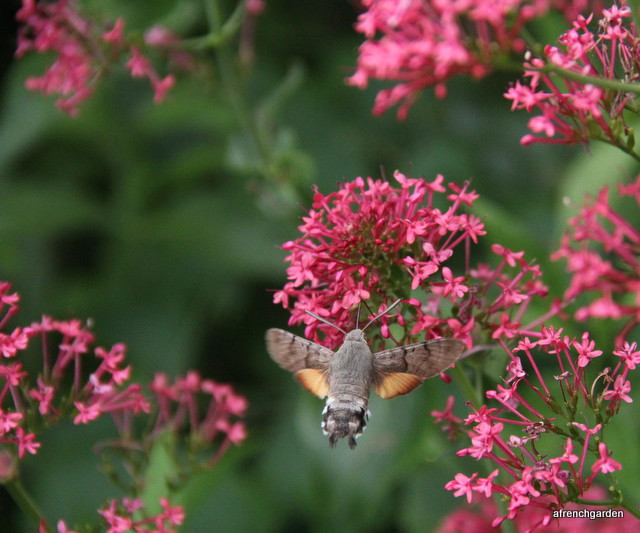 The weather has been getting warmer these past few days and yesterday was 35 degrees Centigrade.  It feels like summer with lots of Humming Bird Hawk Moths (Macroglossum stellatarum) flying through the Centranthus ruber and Nepeta. 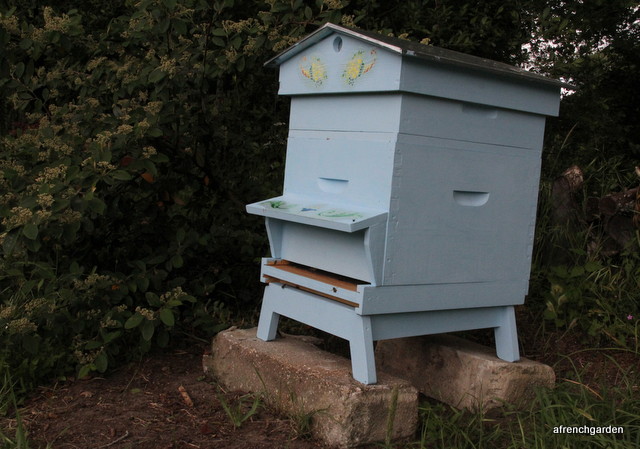 When we left on holiday the captured swarm was still in its polystyrene temporary accommodation but when we returned Michel had kindly transferred it to its proper home at the bottom of the garden. 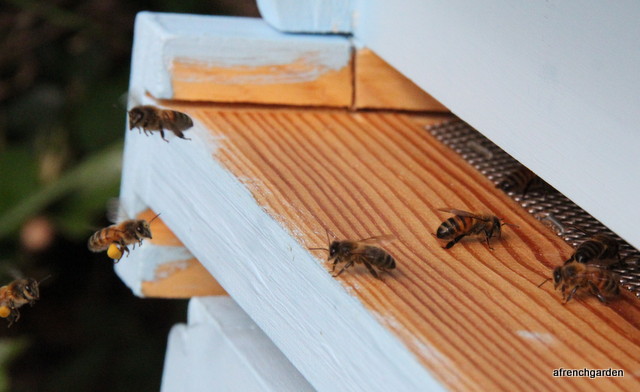 I now know where to find Kourosh if he is not around. 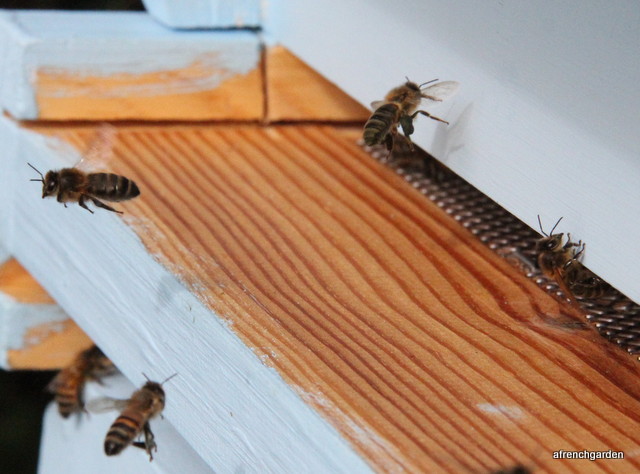 He will be watching his girls at the bottom of the garden.  I know where that bee got her black pollen from!

He is a well-behaved beginner and does not disturb the bees but he has lifted the top board to slide a Bee Gym on top of the frames.  I had read about this on Emily’s blog http://adventuresinbeeland.com/2013/11/03/into-the-dark-of-winter/.  I had thought it sounded a novel and interesting idea.  You can read more about it here at Bee Gym.

However, the second “ruchette” has remained empty, although it had looked like a swarm was very interested in it before we left on holiday.   Our neighbour Annie said that the weather turned cooler when we left so that might be the explanation.  Never mind, Kourosh is more than pleased with his swarm…and in addition interest has been renewed in the “ruchette” with the onset of warmer weather.