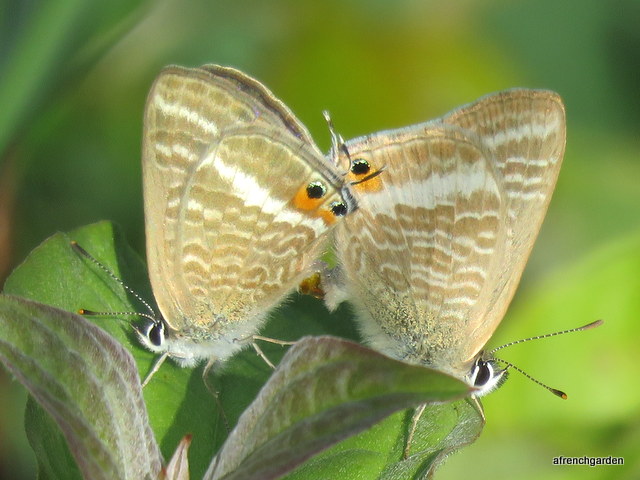 August has been hot.  The garden has survived.  We have had two recent thunderstorms with rain to relieve the parched plants.  I am creating a new border on the left hand side and had new plants and cuttings that had to be watered, I just had not the time to go round all the established plants but all have survived except for my fragrant Skimmia that I had raised as a cutting from Aberdeen.  I did water it but it could not take this year’s temperatures and fierce sun.

What has done well for this hot, dry year is the perennial sunflower.  They grow two metres tall providing a temporary hedge and provide lots of nectar and pollen for all takers.

My cutting of the wild Marshmallow plant (Althaea officinalis) that grows near here has done well.  Now I have the pleasure of watching the bees gather the pink pollen in my own garden.

It has been the rare days when it has been cool enough for me to go out for our usual walks.  I have missed that this year.

The sight of brambles always spurs me on to make some jelly for the winter time. 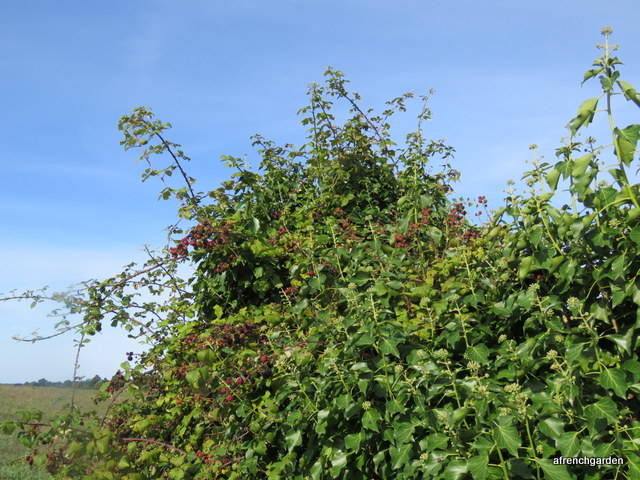 So the brambles were collected mid August early in the morning before the sun got too high.

I like making jelly as I make the jelly the day after I strain it which splits the preparation time into more manageable segments.  I’ve still got some juice that I have frozen awaiting the quieter (?) days in the winter.

As the apples started to fall off the trees I made chutney with them and red tomatoes. 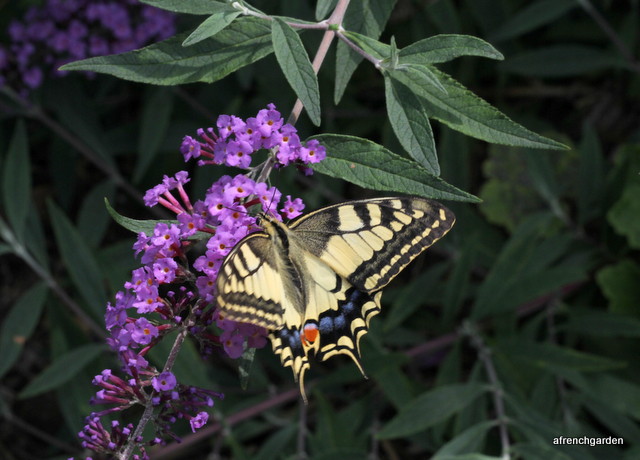 I became gradually suspicious of the baby Caryopteris my sister gave me last autumn.  It started off very small but in recent weeks has had an amazing growth and has produced very distinctive flowers.  I shall forgive her as I would never have got such a good shot of the Swallowtail butterfly and we need something to temporarily screen the hives from the road.  The buddleia  will be transplanted in the autumn.

On the subject of butterflies – I thought I knew what these were when I saw the little tails on their wings.  I thought they were short-tailed blues but in fact they are long-tailed blues (Lampides boeticus) – not that their tails look very long to me.

From another angle you can see that the male is blue on his upper side.

Belle de nuit (Mirabilis jalapa) is not one of my favourite flowers but it always pops up somewhere at this time of the year. 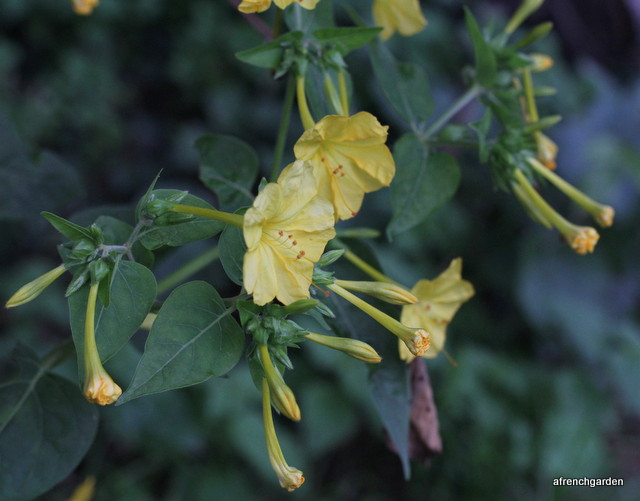 This will probably be due to furtive seed sowing by my husband who does like them, especially the yellow ones.  The perfume is very distinctive.  Wikipedia says it is similar to tobacco flowers, which I disagree with.  It reminds me of something I cannot place, with a “cheap perfume” odour.  Has anyone any other descriptions of its perfume?

I sympathised with our little tree frog who escaped out of the heat into a hole in the wall of the house.  I have never seen him there before. 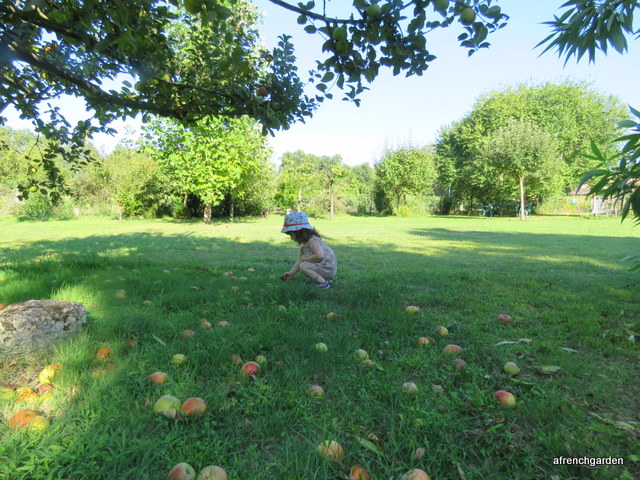 But the August highlight was when littlest grandchild came for a visit.

So many apples to eat!

Yesterday I was contacted by the Observatoire des Vers Luisants that is the Observatory of glow worms.  I was asked if I would be willing to repeat my “Special Mission” looking for glow worms on the same route any day from yesterday until the weekend.  I happily agreed as I find glow worm searching fun. 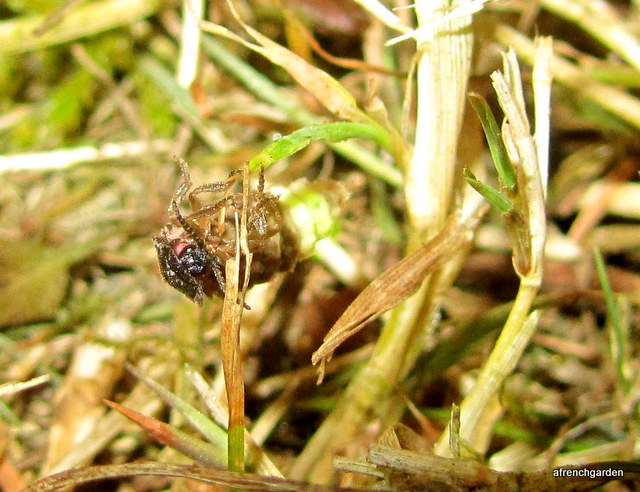 This time we found 14!  Much more fun than the last negative survey we had made.

We had been asked to take photographs if possible.  That is not so easy!  My built in flash is all I have got and so Macro shots have too tight a field of focus.

Kourosh resorted to his old Canon PowerShot SX210IS which leaves a small black mark on the photos (cut out here).  He managed to capture the winged male edging up the ivy leaf towards the female.

We even found three glowing away in our front garden – but they did not count.  I wonder if it was the 15 mm. of rain that fell during thunderstorms Sunday night/ Monday morning?  Everything feels better now.

Any advice on taking photographs of glow worms would be appreciated.