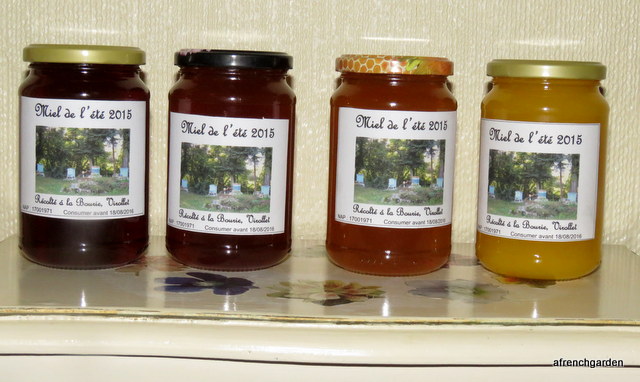 There are those beekeepers who maintain that the bee keeping year ends at this time of the year; others believe that the year really starts after the honey harvest as one prepares the hives for the coming year, looking forward to the Spring collection.

Whatever the merit of the discussion, I feel that the work and the pleasure never ends.  Michel advised us to go ahead and collect our honey a few days before my granddaughter’s visit to France so that the bees calm down after we have stolen their reserve of honey.  Being our first harvest, I followed the advice of using an escape board on the two hives with supers. I placed them on the hives on a sunny evening and the bees were quite content to let me do it without using the smoker that I had prepared. The following morning at 7 am, Amelia and I temporarily closed all four hives by way of precaution, and opened Cornucopia which had two supers.  There were indeed very few bees left on the frames and we easily brushed them off and placed the frames of each super in a separate box closing the lid after each transfer.

Opening up Violette was even easier as she had only one super.  None of the bees seemed disturbed by us taking their honey and once again the smoker lay unused at the side.  In fact, it was only the few stray bees left in the supers and the early birds returning to the hive that were very concerned that their hive was closed.  Once we opened the hive doors all returned to normal.

Violette is Amelia’s special favourite hive; once she saw the queen, she was smitten!  I admit that her bees appear to be the most gentle of all our hives.

We took the three boxes with our frames to Michel’s house where he has a special room with all the equipment necessary.  There is little merit in going through every step for the extraction, as everybody who has already done so knows how rewarding and pleasurable an experience it is.

Michel was particularly keen that we keep the honey from each of of our hives separate, including the un-centrifuged honey obtained from the cappings.  We kept the separated honey for a week in 10Kg containers before bottling them.  Being a complete novice I was pleasantly surprised to see that from three supers, we ended with four different colours of honey, the fourth being the un-centrifuged honey from cappings.

The hard work was almost over.  Our next task, after letting the bees clean their frames, was to start treating them against varroa.  Based on the advice of our regional bee health service, we have started three course of “Apilife Var”, which is an essential oil from thyme and other plants.  It is most effective in temperatures of 20-25 degrees C, which was about the temperature when we started the treatment.  Unfortunately for a few days the temperature rose to around 34C in the shade.  At that temperature the fumes generated could affect the larvae and in addition the bees don’t appreciate the smell.  So we had quite a lot of bees sitting outside the hive, and that left them easy prey to the Asiatic hornets which constantly come and pick the bees one by one.  It is heart breaking to watch this.  Amelia and I stand guard several times a day catching the hornets with a child’s fishing net.  We can win the battle of the moment, but we are not winning the war.  At the end the bees appear to have resigned themselves to some casualty.

The flowering season is not over yet.  The garden is still full of flowers and the bees are quite busy.  The ivy has also just started to flower in the forests around our house.

I am glad to see that in the interval between the removal of the supers and two weeks that have passed, the bees have added a considerable amount of additional honey stock for their winter reserve.  The only annoying thing is that the hornets are also visiting the same ivy flowers.

I try hard to accept the battles of the bee life and Amelia and I try to protect our “girls” against the predators as well as the unusually hot days the best way we can.

30 thoughts on “What colour is honey?”