This is a picture of the bee hives on the twelve of December.  They are enjoying the sun but the air temperature is only ten degrees Centigrade.  We have our nets at the ready because we have still been catching a few hornets this week.  Later in the day the air temperature rose to fifteen degrees.

We had noticed that all the hives have been active this week, especially Sunflower our youngest who brings in a lot of pollen.  I decided to try and find out where the pollen was coming from.  Apart from this rich orange pollen she is bringing in an almost white pollen, a yellow pollen and a tiny bit of light green pollen. 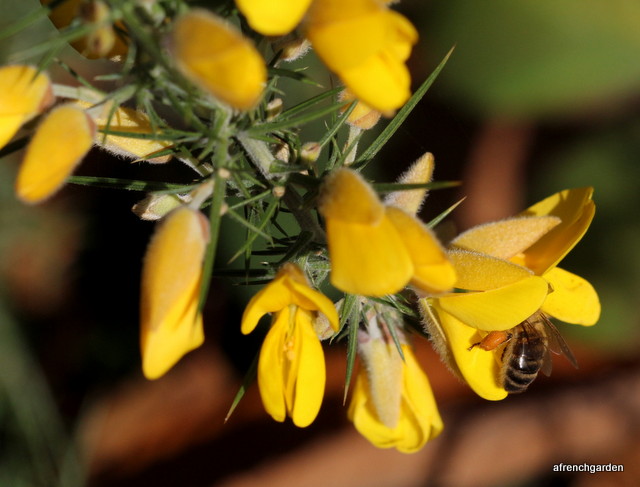 I must admit I had a good idea of where to look for the orange pollen.

Gorse is a good winter provider of pollen for the bees.  But look at those spines!  Not a plant for the garden but a good plant to have in wild areas for the bees. 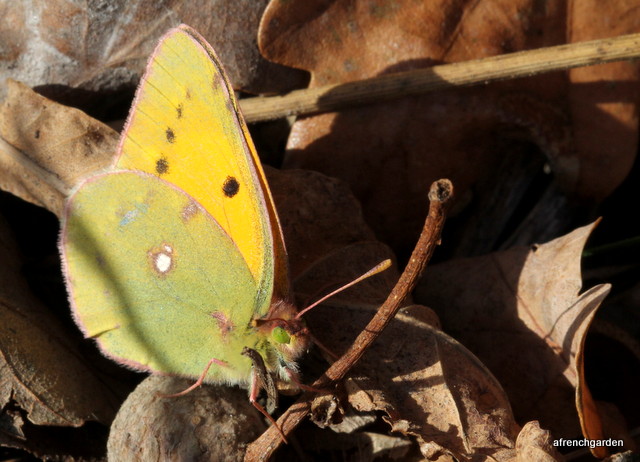 I saw several Clouded Yellow butterflies (Colias crocea, I think) warming themselves in the sunshine not far from the gorse.  It seemed strange to be walking in the sunshine in December and seeing butterflies on the wing.  However, night time temperatures are going down to only two or three degrees Centigrade so they will have to find somewhere to shelter when there is no sunshine.

I do have my doubts whether all the individual bees are equally industrious.  This bee attracted my attention as she was sitting on the thyme on the other side of the rockery just out of sight of the hives.  You will note she is not sitting on a flower.  The thyme has flowers, which she could hardly miss, but she chose to sunbathe on the tip of the stem to soak up the sun’s rays. Perhaps she is an autumn bee – programmed to take a more zen approach to life and to enjoy life until next spring.

There is a lot of Rape (Brassica napus) flowering at the moment.  These are the self seeded plants that have grown when the Rape was harvested earlier in the year.  Stretches of the flowers can be seen along the lines of bare vines where the seeds must have been trapped by the wind.

Today I noticed a bee collecting pollen on the Rape flowers, so this is a possible source of the yellow pollen the bees are bringing home.

However, my Winter Honeysuckle is only metres away from the hives and is proving very popular with the bees. 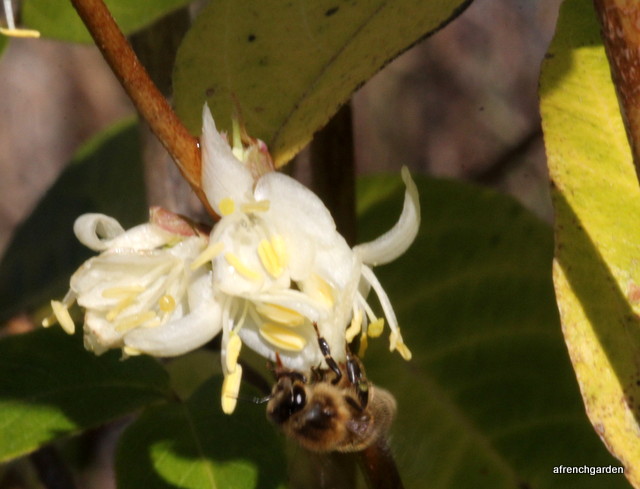 The air temperature was only just over ten degrees when this lady joined the bumble bees to take her share of the nectar on offer.

Later on some of the bees started collecting pollen which is a rich sugary yellow colour. 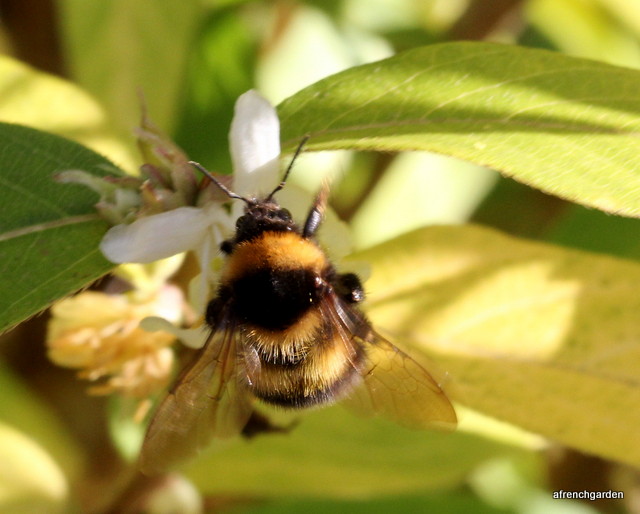 The Honeysuckle flowers are also appreciated by the bumble bees that are active on the warm days too.

If you compare the size of the Honeysuckle flowers and the queen bumble bee it will give you an idea of how big she is – much bigger than a honey bee.  I think she is a Garden bumble bee, a bombus hortorum, as she has a long face – but I find bumble bees difficult to identify so I am not sure.

I have been pleased to see the bees visiting my Erica darleyensis but I have not seen them taking any pollen.  So I have not solved the mystery of the source of the white pollen yet. 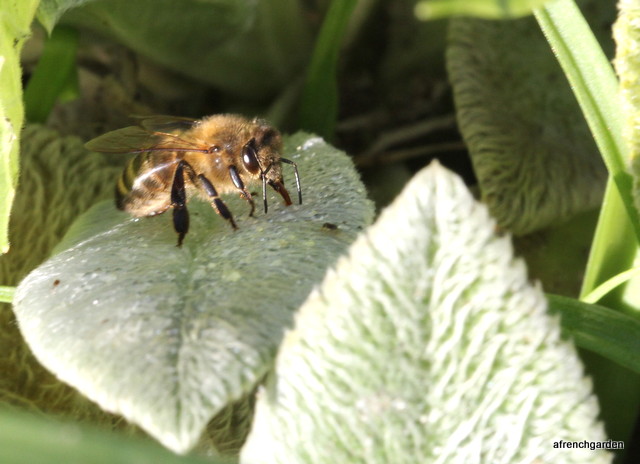 But with the bees there are more mysteries than answers.  This bee was sourcing something tasty from my Stachys (Lambs’ Ears) leaves!

So I have managed to work out that the majority of the pollen is coming from the gorse at the moment with smaller additions of yellow from the Winter Honeysuckle and Rape.  I did not get any photographs of bees on flowers gathering white pollen but there is plenty of Scabious flowering at the moment so that is my best guess as to where that white pollen came from.

I just hope that the bees are not as unsettled as some of the plants in the garden at the moment.  The fruit trees are starting to bud and we have seen our first apricot flower.

33 thoughts on “The bees in winter”