This year the garden has had more rain than I have ever experienced here.  I noticed the yellow sedum had dropped its seeds and new plants were growing in the hollow of the next door stone.  By this time of the year moss would usually have turned to a crispy brown but it has inspired me to put some more sedum into a little pot because if it can survive on a stone it will survive in a little pot without much care from me.

Everywhere is green and the trees are doing well with the extra rain.  The Linden or Lime tree (Tilia platyphyllos) is in flower and I will be taking its flowers to dry for making tea. 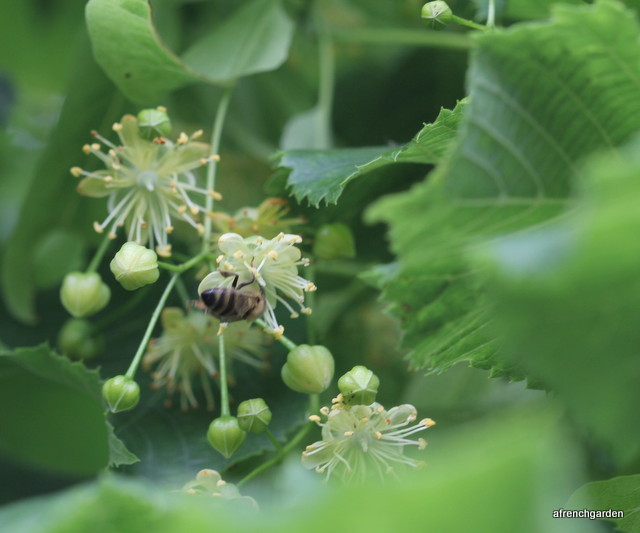 Of course, I won’t take all the flowers.  The bees have to have their share.  I once tasted monofloral lime honey.  It tasted like eating the wonderful perfume of the flowers, marvellous.  I usually take my tea without sugar but when I infuse the Lime tree flowers I always take it sweetened with honey. 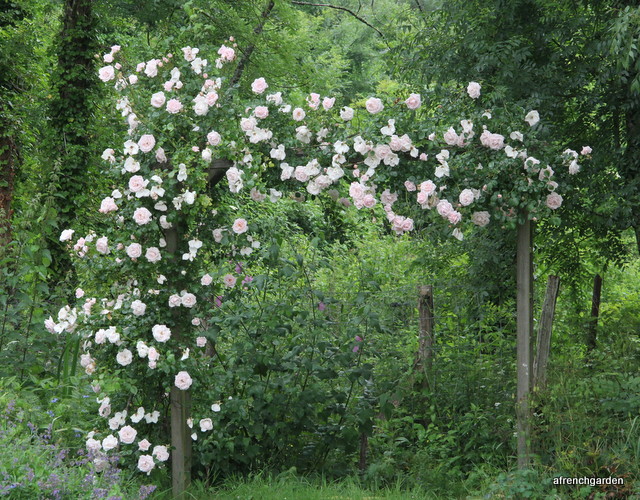 The roses seem happy with the extra rain.  New Dawn is the best it has ever been, especially as some trees were removed from the neighbouring garden two years ago and she now has more light.  Still she always did well in the comparable shade and her shiny leaves keep healthier than a lot of roses.

Bobby James has adapted well to a position under a tree.

The bees appreciate Bobby James too.  The pollen is taken by all the bees.

Veichenblau is almost finished flowering but is another rose that attracts the bees in quantity.  However, both these roses usually only have the one abundant flowering.

The poppies seem to have difficulty opening with the lack of the usual sunshine.  The bees became impatient with this opening poppy and five of them forced their way inside!  The pollen must taste very good or have other properties to make them want to compete in such a bundle for the pollen.

I have become more appreciative of the hover flies since I have learnt that, in addition to being good pollinators, their larvae are voracious consumers of aphids.  In a publication backed by the French Ministry of Agriculture it states that female syrphid or hover flies can lay between 500 and 1000 eggs and that each larva can consume between 250 to 400 aphids over its life.

I am rather pleased that this Verbascum chose a convenient spot to put down roots.  I usually have one or two in the garden as the seeds get blown in from outside.  I don’t know what species it is but I think the wild carder bees will love the down on the leaves. 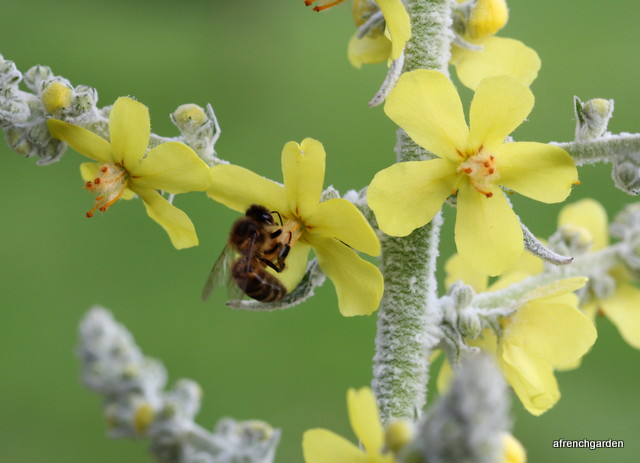 The honey bees seem to collect nectar from the pretty yellow flowers but the lower leaves are usually eaten.  Until today I suspected slugs and snails. 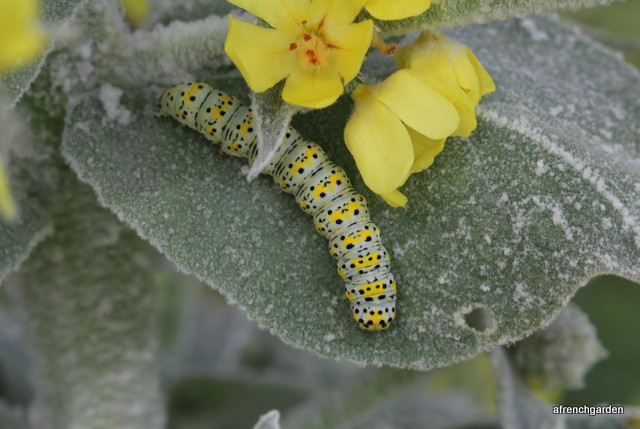 I would never have noticed this fat caterpillar if I had not been watching the bees.  I am not sure what it is but as it is on a Mullein and looks very similar to a Mullein moth caterpillar…

Outside the garden the wild flowers are benefiting from the extra rain.  I have never seen as much birdsfoot trefoil (Lotus corniculatus) on the verges as there is this year.   I should use the past tense as all the verges on the little roads around us have all been cut.  France – terre de pollinisateurs mmn…

26 thoughts on “A wet June in the garden”