What would the garden be without the birds?

In our garden in France some days we hardly hear any sound of human existence.  Just the two of us digging, weeding and replanting.

This Spring we have  four pairs of redstarts (Phoenicurus phoenicurus) nesting in our garden, on the ash tree, under the car porch, in the Persimmon (Kaki) tree, and on the low beam outside the  kitchen.  This last one was originally an old robin nest.  That makes it a bit awkward as we have to be able to get in and out of the outhouse, but it seems that the bird and us have got used to each other, as long as we don’t look at her when we pass by.

Actually I think three pairs are the common redstarts and the other pair are black redstart (Phoenicurus ochruros). 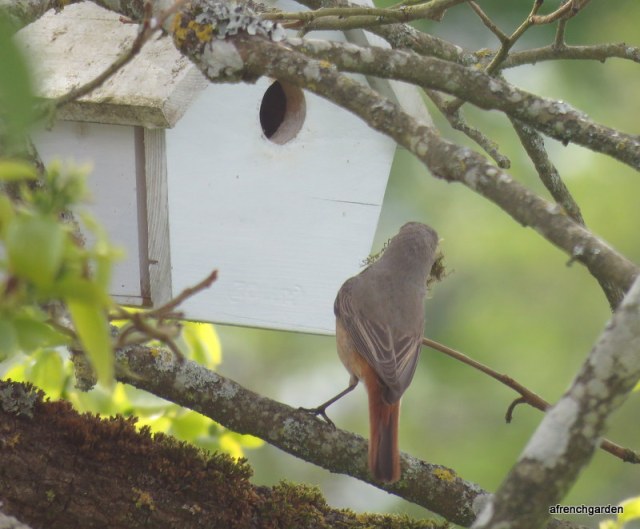 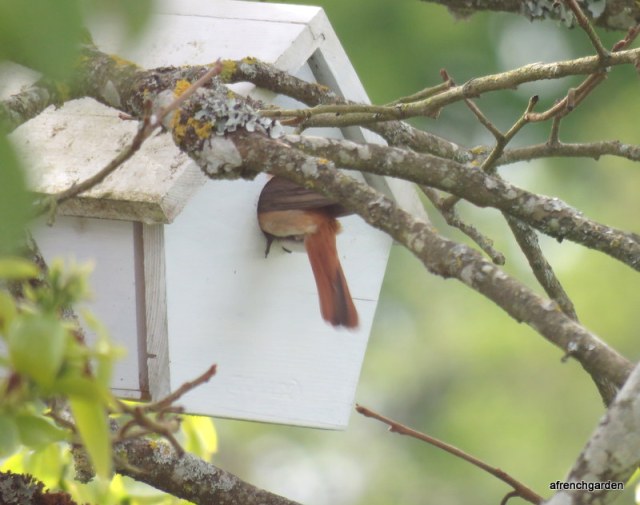 I had a peep inside their nest earlier, as the little bird was carefully preparing it.  Have you ever seen such soft bedding?

A few days later I looked at the nest on the beam outside the kitchen door,  The nest was all ready with five eggs.  It looks as if she has used the sheep’s wool from next door to line the nest.

I have left several water dishes for our birds, but I think the redstarts are the cleanest birds.

Their bath times remind me of my grand daughter who loved what she used to call her ‘splishy splashy’.  Is this one washing her ears?

This all makes a change from the bees and swarm collecting.