For us, in this little corner of France Spring 2020 was a little unusual.  The winter was rather mild, and then we had quite a lot of rain in early Spring which together with warm weather pushed all the plants forwards – specially the nettles and other weeds.

So, during the self isolation period of the pandemic of Covid 19, Amelia and I spent a lot of time weeding, and gardening and weeding!

But gardening has its rewards, as we could take our coffee breaks and smell the heady perfume of the wisteria along the fence.

A few years I brought the seeds of a rather large poppy from Spain.  We simply named it the Barcelona Poppy,  It is now much appriciated in several spots in the garden.

Another favourite of mine is a rose bush called Phyllis Bide.  It has smallish flowers but very delicate colour. 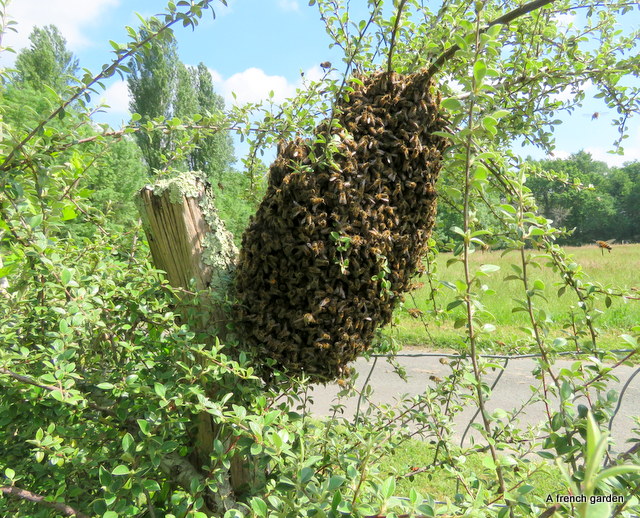 During the cold months of winter the queen bees almost stop laying eggs as there is shortage of pollen and nectar outside,  But not in our garden.  Amelia has planted so many winter flowering plants that the bees pop out frequently for a little snack all through winter.  Of course outside in the open fileds there are also plenty of wild flowers like dandilions that are welcomed by the bees.   As the result the colonies grow quite fast and then nearly half a colony swarms forming a new colony.  We had our first swarm of the season on the 21st of March (the vernal equinox).  We collected it and placed it in a 6 frame nucleus hive.

Since that day until the 26th April, we had a total of 8 bee swarms all landing within a few metres of our beehives.  We know that at least two the swarms came from our own colonies.  Early last winter we lost two of our hives and so two large swarms were directly placed in hives.  Two other hives after swarming did not develop as well as we had hoped.  So after a couple of weeks that the newly arrival swarms had well developed, we mixed them with each of the less-developed hives after sugar dusting both colonies to help them accept the odour of each other.

Our friends who keep bees a short distance away also had similar experince and we gave them the other swarms. 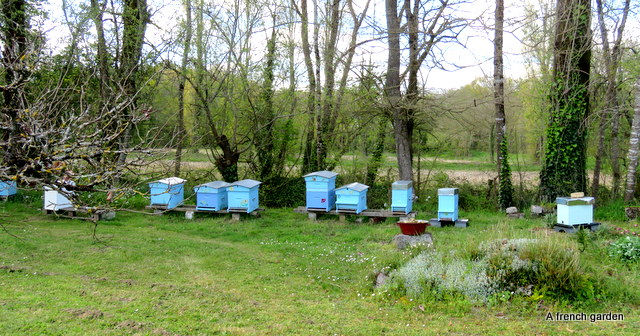 We had promised ourselves that we will not keep more than 3 hives at the bottom of our garden – OK, we said just 2 more in case we lose any.  But by end of April the bottom of the garden had become a nursery of hives and nucleus hives.

Each year, on 5th of May the Europeans commemorate the end of War in Europe.  On that day, I passed the centre of our village and noticed a field some half a kilometres long full of red poppies and it made me think of all those brave young men and women whose blood was spilled on the European soil.

The cotoneaster is now in full flower and you should hear the buzz of the honey bees as well as the bumble bees on them.  Sometimes when I pass the bushes, I wonder of there is a swarm, as they make so much noise.

Just when we thought the swarm season has finished, on 28th May we had another bee swarm very low on a branch of our loquat.

We are happy that we have now all our five hives active and we have placed super on them to hopefully collect some summer honey.  However, we did have to recombine 4 of the swarms with our colonies as they were weak.  We also gave four of the swarms to our friend as they lost four hives.  So, that is why I found this spring somewhat strange.

I hope that all is well that ends well.

19 thoughts on “Is this the last bee swarm of the season?”