Sadly our annual bat visitor left us two days ago.  It was sad to look and find an empty space behind the shutter.  I checked the shutter on the other side of the French door but I knew he did not like that side.  No bat on the wall or on the shutters.

Then it occurred to me that it had started to rain two days ago.  So Kourosh was duly dispatched to the atelier with a torch because if anyone could find a needle in a haystack it would be him.

So, not very far away from where he had roosted last year, our bat had remember that there was a good place to shelter in inclement weather.

It does mean that the photographs are not so good as he is quite high up and the angle of the photograph is directly underneath him.

I’m glad he has not left us yet.  The weather is forecast to improve next week.

What a ridiculous question!  It is a well known fact that bats like hanging about in dark places like belfries or caves.  In fact, our bat gave up his usual place behind the front door shutter last year to hang in the atelier when it was very wet.

So I was surprised yesterday, as I was enjoying sunshine and temperatures in the lower 20’s, that the bat looked as if it was doing the same thing!

Bats in France often find shelter in old quarries or disused railway tunnels so perhaps, after a winter of hanging about in places like that, a nice bit of sunshine on the back of your neck feels really good.

So perhaps sunbathing bats are more common than we think.

I suppose we should have realised from the time of year that we could be receiving a visit from our friendly Barbastelle bat (see https://afrenchgarden.wordpress.com/2015/03/06/many-happy-returns/ and https://afrenchgarden.wordpress.com/2014/02/21/a-furry-visitor/).  We have been looking around the front shutters but when Kourosh went out to collect some logs from the outbuilding the other day he felt a bat fly around his head and he noticed where it settled.  The bat is quite small with a body about six centimetres long so I have marked the spot where he roosted on the wall at the corner of the joists as that is not visible from the closer photograph. 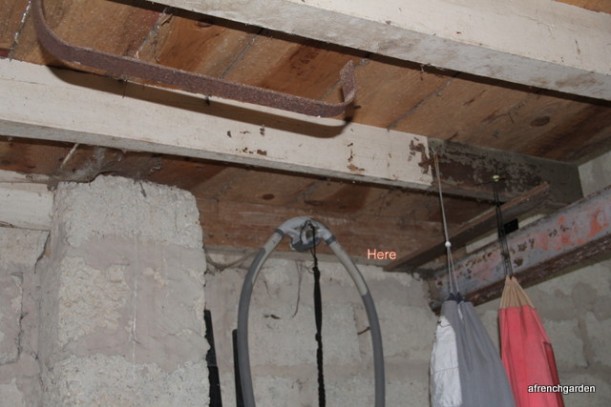 We are not sure whether it is the same bat that comes every year but in view of all the rain we have been having this looks like a much better choice of roost.  It looked very cosy between the outside wall and a supporting bean of the mezzanine deck.  Much drier than behind a shutter!

However, I note from the book “Le Guide des Chauve-souris en Poitou-Charentes” by Olivier Prévost (2004) that small colonies have been found behind the shutters of abandoned houses.  Another place that they use frequently is the lintel space on doors of barns.

France is fortunate to have representants of thirty one of the forty one European species of bats.  The Barbastelle is a threatened species if viewed on a European basis but not rare in this area.  However, they have a tendency to move around and shift their roosts depending on weather conditions so they are not easy for researchers to keep an eye on.  They are also found sheltering in the abandoned quarries of Poitou-Charente.

It eats mainly moths of the type that would be found flying in dry leaves and litchens in wooded areas and its natural roosting spot can be presumed to be cracks in trees. 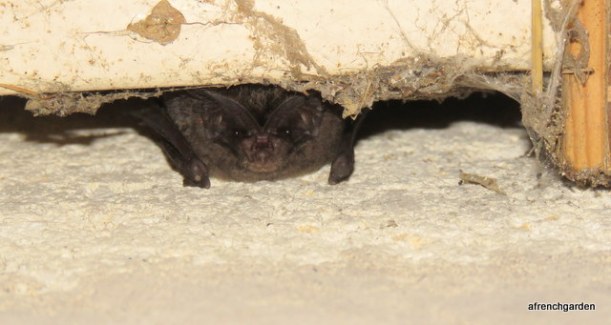 So the Barbastelle (Barbastella barbastellus) is not just a pretty face but an important link in the health of the European forests.