As I posted here on April 15 2020 , we had a bat lodging in our garden parasol.  Much as I was enjoying sharing the garden with wildlife, I did feel my need of the parasol was greater than his.

We did try to take a photograph of him leaving in the evening.  It was at this moment in the darkness we realized that it was not only difficult to see in the dark but impossible to focus a camera (live and learn :)). 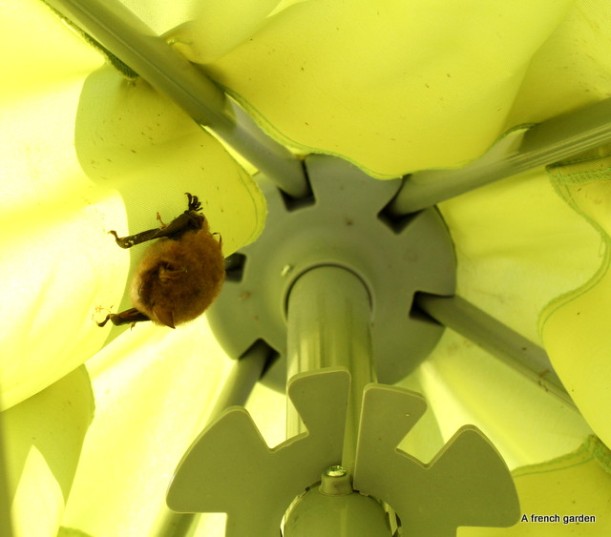 We were able to take an improved photograph of him by flash.  Not great, I did say improved.

Here the photograph is turned upside down to help with identification because I do not think it is small enough to be a pipistrelle.

I think it is a Myotis species, one of the mouse-eared bats.  It has little bumps on its nose.

I found this site helpful https://nottsbatgroup.org.uk/wp-content/uploads/2015/10/Identification_of_British_Bats.pdf but I wonder if anyone out there has any ideas?

This is the best I can do to help Dromfit with an ID.

We have been getting summer weather almost continuously for the past month.  For instance, this afternoon it was 27 degrees centigrade (80 degrees F) in the garden.  We have been making the most of the garden and enjoy being able to have lunch outside – even if we may need a jacket.

Today was, in fact, too hot without sitting under a parasol, but the parasol had been requisitioned as a day-time roosting spot for a bat (Pipistrelle, I think.)

We have had a Pipistrelle roosting through the winter behind the shutters of the window facing the garden.  He disdained the bat box Kourosh had made  mounted on the wall.

Kourosh noticed that the gap he squeezed into behind the shutters was narrower than the gap recommended for the bat box.  So he made a custom-sized box specially for him and placed it slightly to the side of where he roosted.  Still he preferred the shutter. 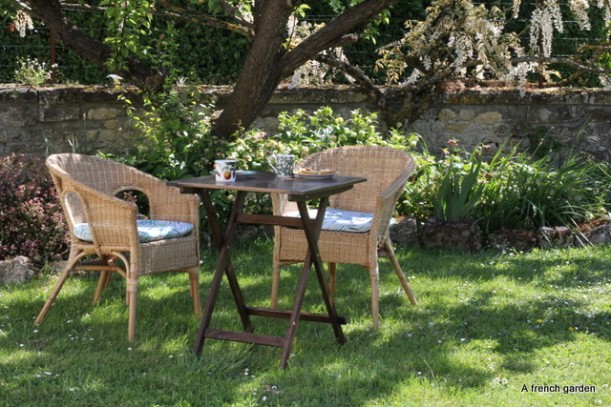 So our choice today was to move under the apricot tree for shade.  We do try to give nature a home but sometimes I think they can push their luck.

This is the shutter of our front door which is left in the open position practically all the time.  However, my husband has a tendency to glance behind it when he passes by.

He did that on the 14 March last year and found a bat clasping onto the wall behind the shutter. 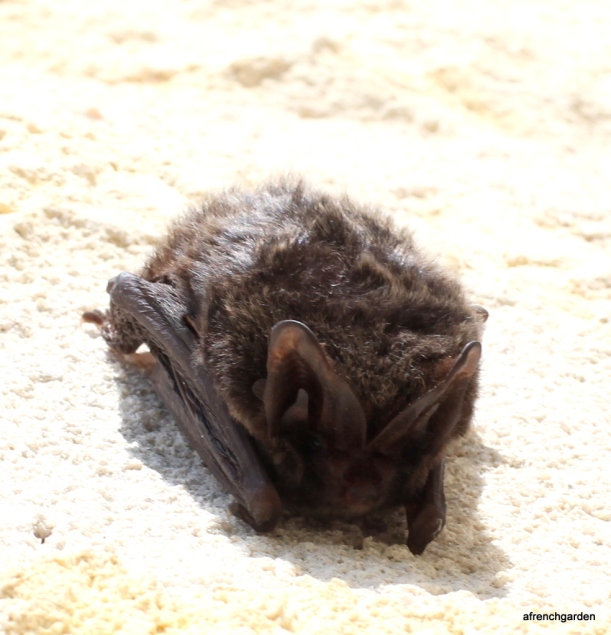 It was a bit of a change from the usual lizards that hide there!  He stayed there for a few days but I have no idea what kind of bat he is.

Black bats are difficult to photograph but at least he stayed still.

Looking closer he has got a cute face.

Is he trying to tell me something here? 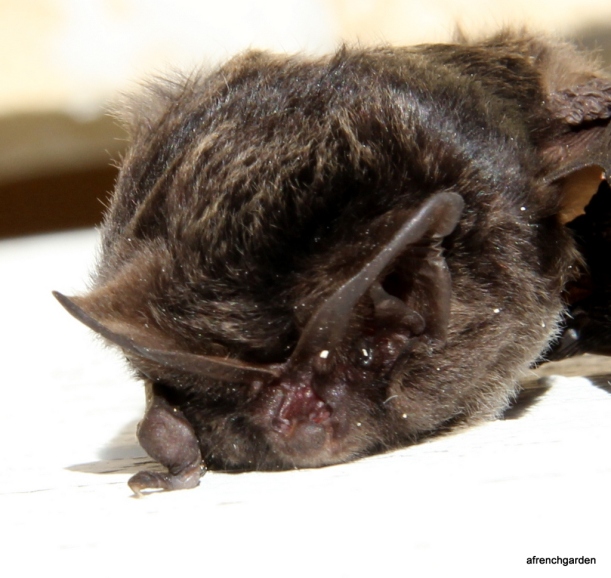 I noticed that he had a strange indentation on the outside of his ear flap and I wondered if it had been bitten.  When I tried to identify him I saw a picture of a Barbastelle bat (Barbastella barbastellus) that had the same marking on the ear.  Can anyone help out with an identification?

He measures 6 centimetres from front to back and has an incredibly furry coat.  He has five toes – just like us!

I don’t think our last year’s bat is the same species so he still stays an unidentified visitor.

I’ve put a watermark on these photographs.  Do you think it is pretentious?

When you live in an old stone house you have got to accept that you will not be the only occupant.  It’s just a matter of when you meet the other lodgers.

A head pops out of a hole

As usual I find myself looking into a hole when something starts looking back at me. 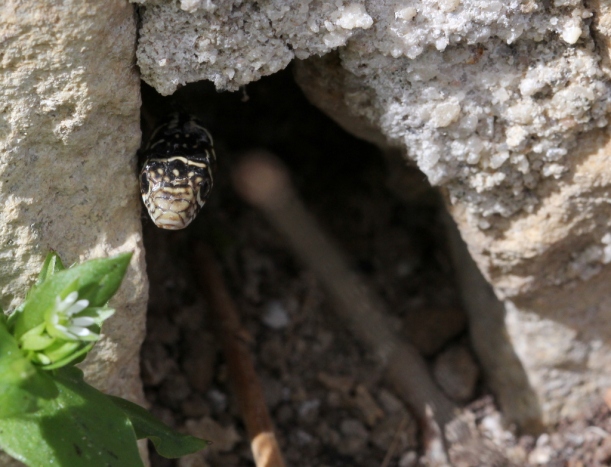 Unfortunately I didn’t manage to catch the little flickering black tongue that repeatedly tested the air.

I was please to see him come out as he will quickly return if he feels any movement. 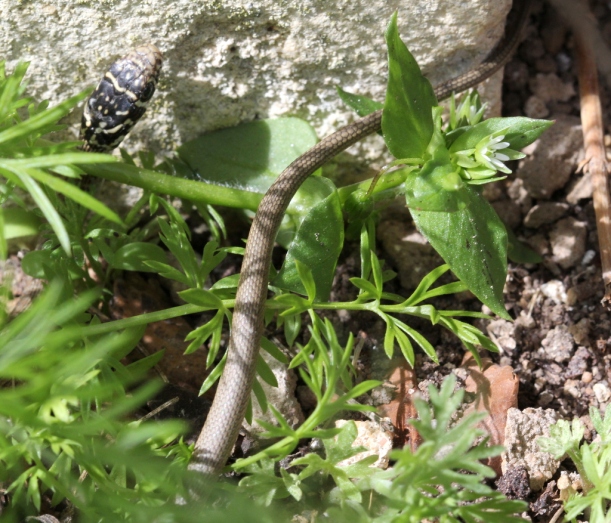 You will note that precaution has won and the last little bit of the tail is still in the hole.  Well after that I must have moved and he was off like a shot back into the hole.

He does move fast and his speed is what gives him his common name of Western Whipsnake – fast as a whip.

We’ve had a couple of sunny days and he likes to sunbathe at the edge of the house.  He is well hidden by the bunches of white Alyssum that grow in the cracks, and O.K. the odd bit of chickweed too.  Reptiles and Amphibians of France say that they hatch at about 30 centimetres and that was my guess of his length although I am very surprised that they would hatch as big as that.  It would mean that my lodger is this year’s hatchling which seems  a bit early.

These snakes are common throughout France and we have seen larger ones before (A Snake in the House).  They are not aggressive snakes nor are they venomous so they are very welcome to share the garden with everybody else.

This picture was taken five years ago and the snake made a remarkably rapid retreat mounting the wall vertically and disappearing over the roof. 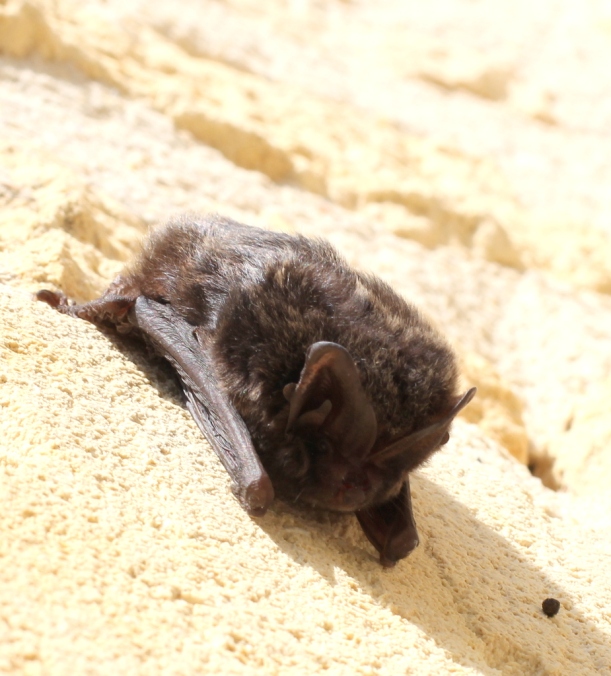 It was a month ago exactly that we had another visitor in almost the same position on the wall.  A bat took up residence behind the shutters of the living room window that we leave almost permanently in the open position.

The bat only stayed a couple of nights, probably put off by people taking photographs of him but I don’t really think that behind the shutters would have been a good site for a permanent roost.