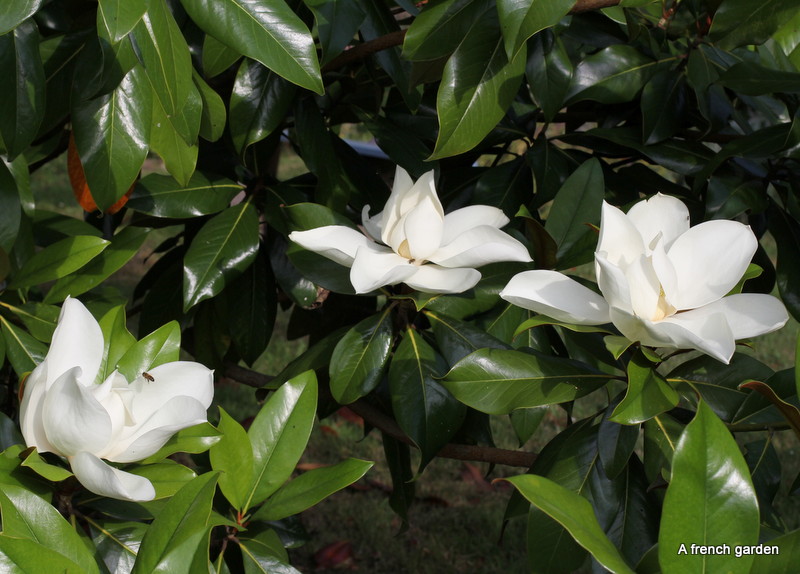 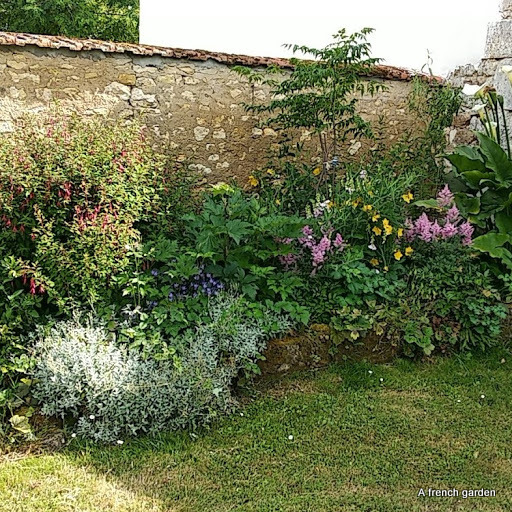 The garden is still relatively green despite our higher than average temperatures and lack of rain. 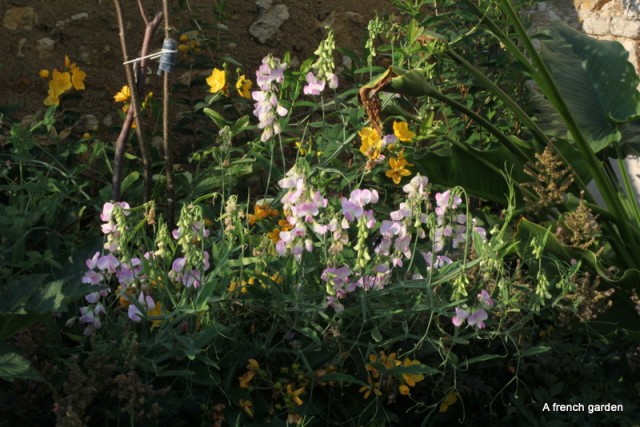 I have managed to have sweet peas for the second year, much to my surprise.  They are the perennial variety and have self seeded and caught me unaware, so I will just have to sort things out after they have finished flowering.  Perhaps next year I will be able to help them put on a better show. 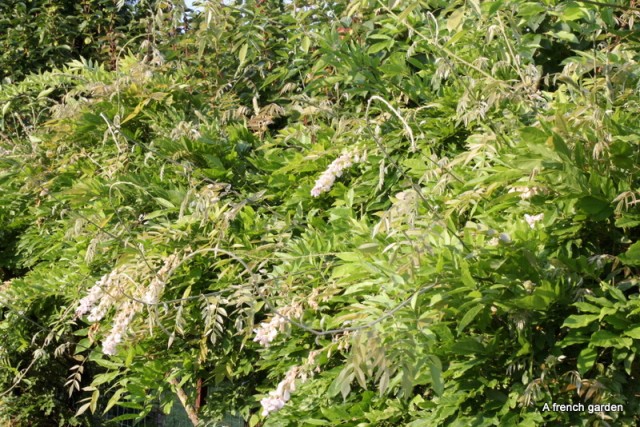 The Wisteria is flowering for the second time and has had a sever trimming since this photograph was taken. 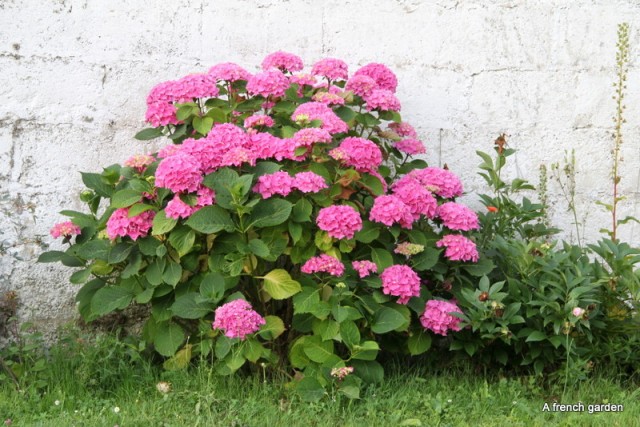 The mophead Hydrangea has supported the heat, up till now, although it looks a little sad in the evenings. 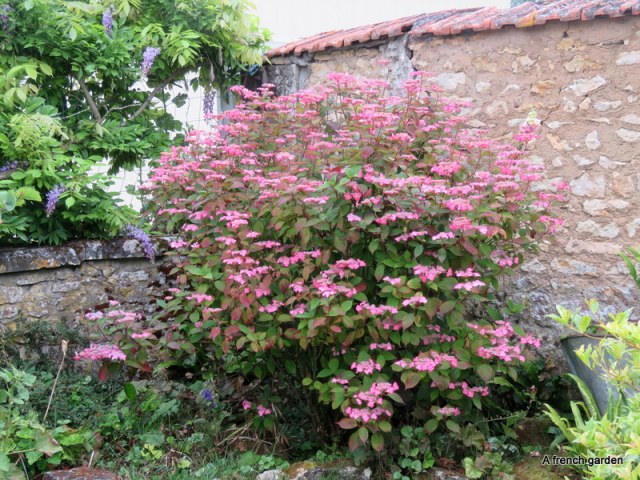 Although the flowers of the Lacecap Hydrangea are pretty close-up, I think they are more difficult to appreciate from a distance as the flowers face skyward.  The mophead Hydrangea may be more common but I feel our mophead has more impact. 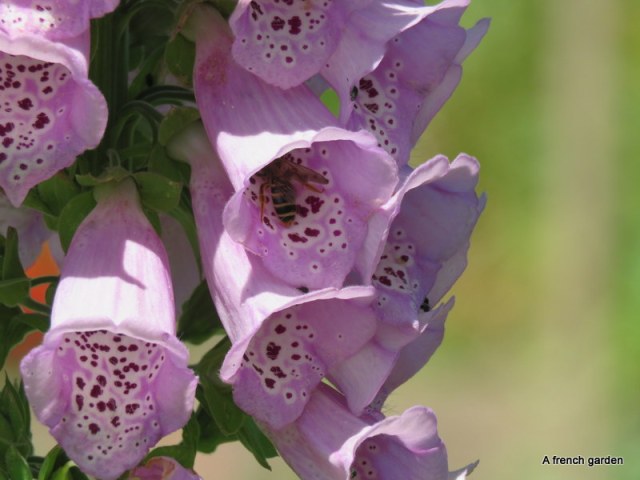 The Foxgloves are mainly over but I will be collecting the seed and trying to increase them as they seem very happy in the garden and have put up a fine show this year. 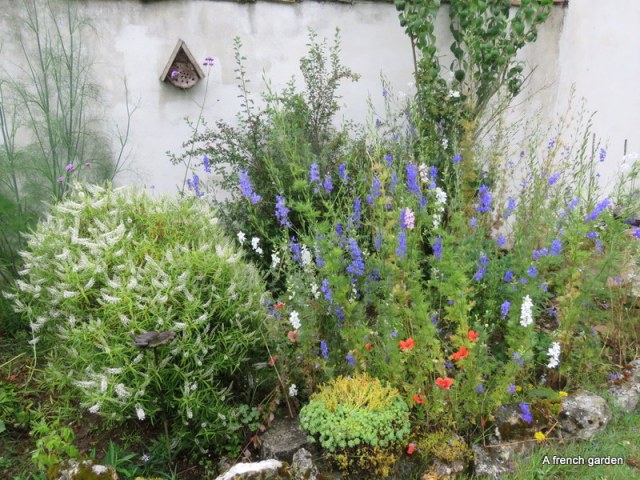 The other star of our June/July garden is the Larkspur (Delphinium consolida).  I have found these grow best here if left to self-seed or sown in the autumn straight into the soil. 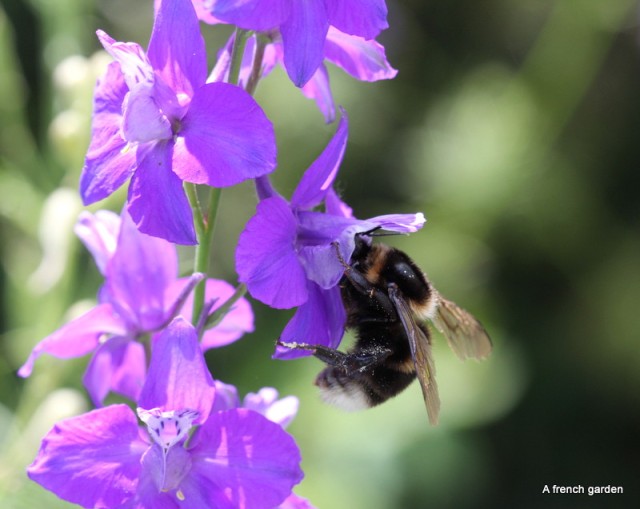 They attract all sorts of pollinators and require no special care.  I get beautiful pale shades of pink and lilac but I have found that I must select the seeds of the white and the pale flowers or else it is mainly the dark blue flowers that take over. 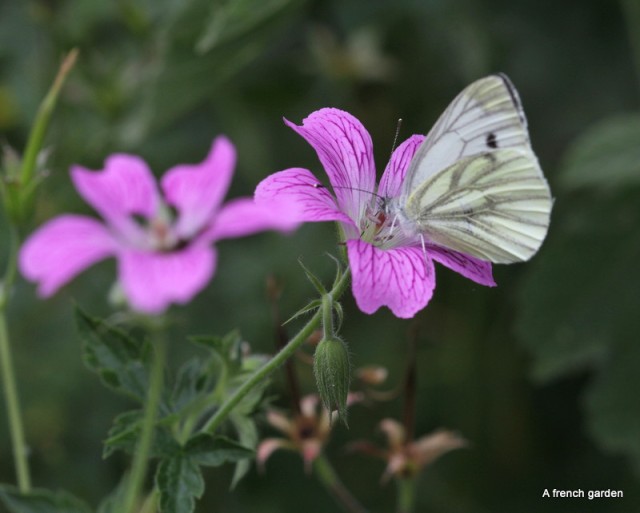 My geraniums have made themselves at home all over the garden and are quite happy in drier, shadier areas.  They are also a big favourite of the bumble bees. 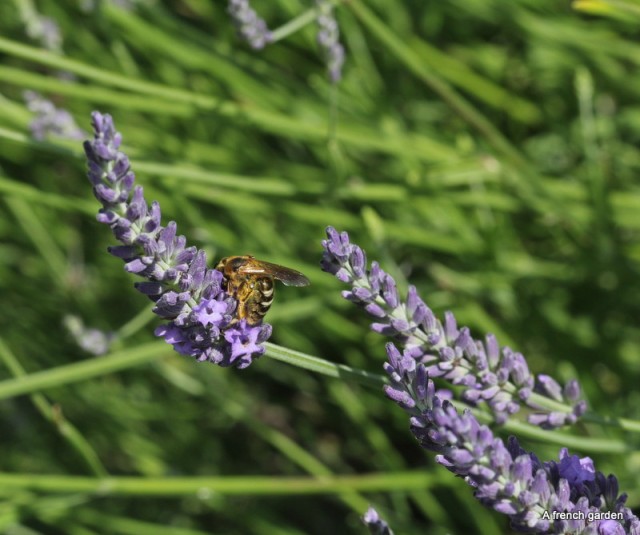 The lavender is growing well and enjoying the hot sun we are experiencing at the moment. 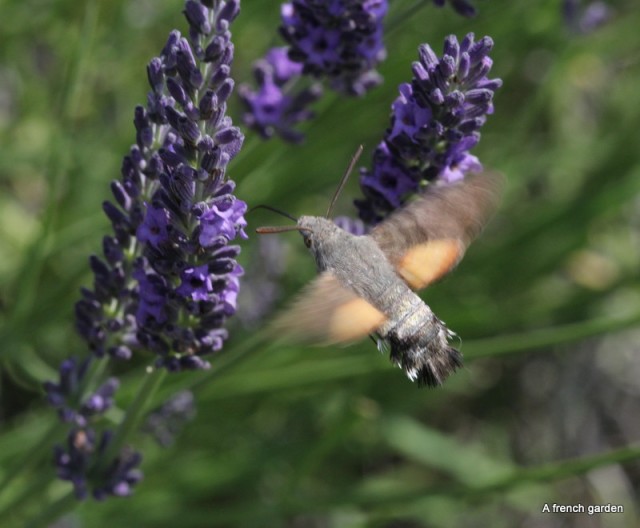 The hummingbird hawk moth (Macroglossum stellatarum) has been around for a while now and he visits the garden from early in the morning until the light is going. 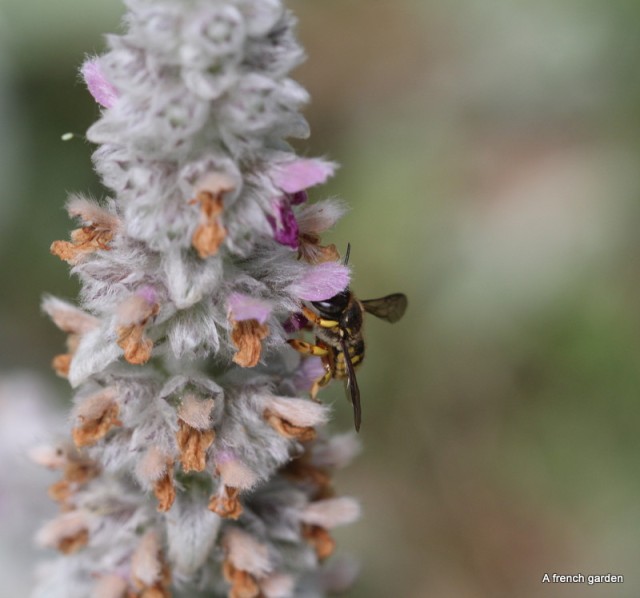 It is good to see the season visitors in the garden like the Anthidium manicatum bee on the Stachys.  Growing Stachys is a sure method to attract this bee to the garden. 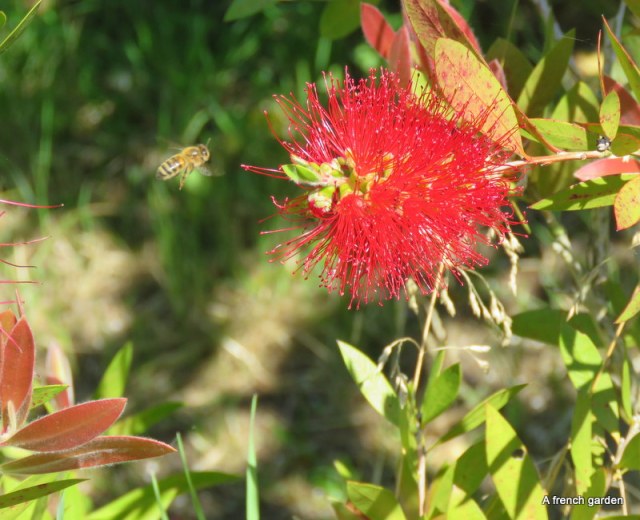 On the other hand the bottle brush (a Callistimon species) has not been the bee magnet that we had expected. 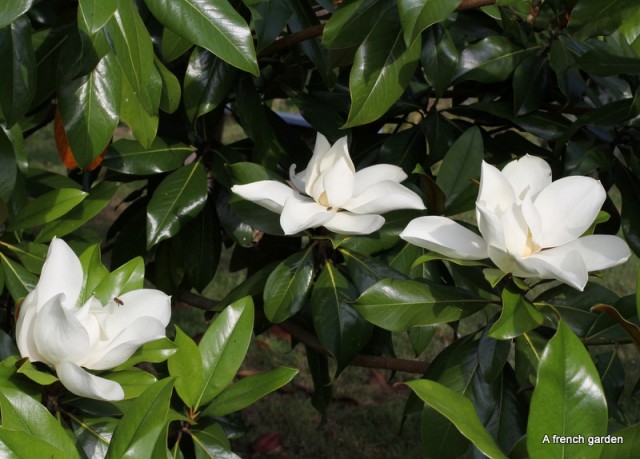 At the moment it is the Magnolia grandiflora that is the star of the garden.  It looks beautiful and smells divine.

…and of course the bees love it!  Have a look at this short video (30 seconds) to see the bees collecting pollen from the flowers. 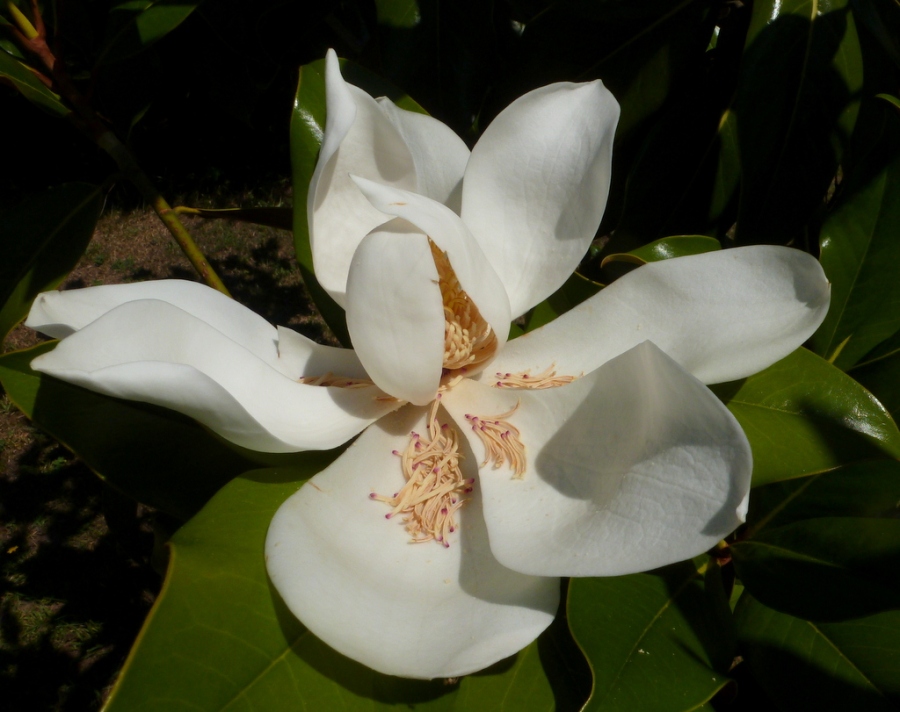 The cold snap is continuing and as the sub-zero days increase in number I am becoming anxious as to the eventual effect on the plants.  They have never been subjected to such a continual cold period which is, as far as the forecasts lead us to believe, to continue.

Some of the plants seem to be resisting the cold well and I impressed by my young magnolia (Magnolia grandiflora ).  I knew the thick, tough leaves allowed it to take the hot summer sun and could stand a good measure of drought but they appear to be comfortably accepting the sub-zero temperatures as well. 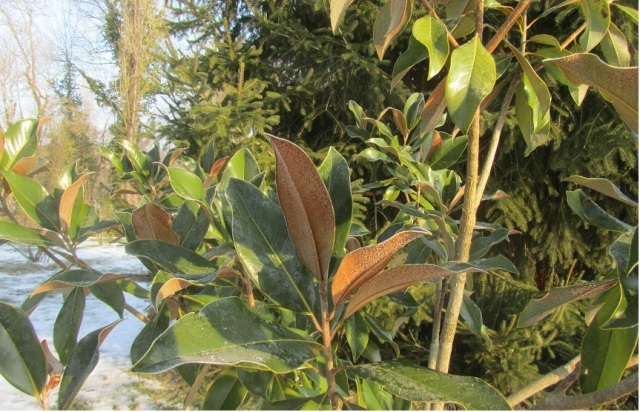 Looking at the photo taken today the leaves seem to be coping well with their first period of prolonged cold.

Last July my little tree produced its first two flowers which surprised me as I had been warned that they took years to flower and I had bought a very young plant. 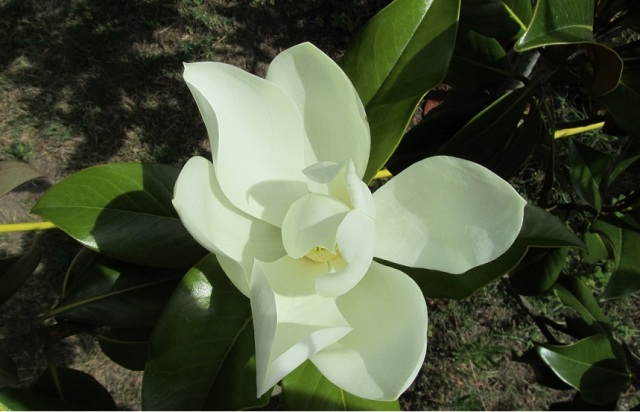 I checked on Wikipedia and Magnolias are native of the south eastern United States and are not known to be hardy plants, however, the varieties with leaves which are brown coloured underneath are hardier than varieties with light coloured undersides.  As there are huge magnolia trees in this region I hope that my little one will not suffer to much damage.