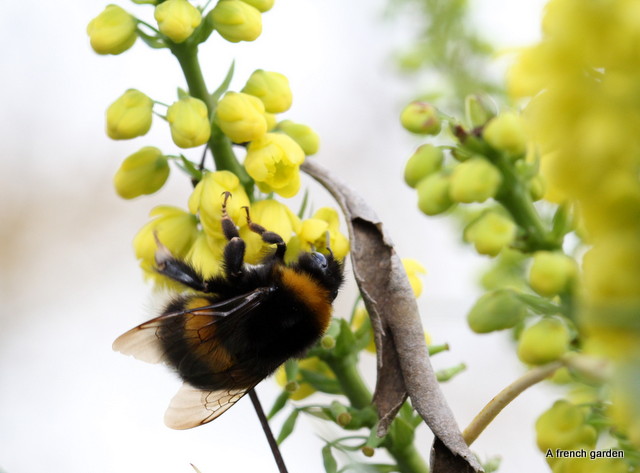 The sun and mild temperatures continue to keep the garden bright. The Cosmos sulphureus, that was dying off, has decided to push out more flowers and the other Cosmos are growing from this year’s seed and flowering. Today my neighbour went to cut down the dead growth on her asparagus plants only to find that they had shot up shoots for a second time and she was able to harvest a good quantity to eat.

Nevertheless, we are going into the season that is optimal for planting new trees and shrubs – or at least for planning.

My Mahonia “Charity” is perhaps not placed in the ideal position for it as it is mainly in the shade but it is near the house, so it has to make do!

Mahonia Media “Winter Sun” is in a better position for light but it is very dry in the summer at the bottom of the garden. However, it blossoms abundantly despite the hard love it gets.

We have a second Mahonia “Winter Sun” which is very shady as well as dry in the summer. They all take this tough treatment without any special care and no sign of disease.

The flowers are adored by the bumble bees.

The honey bees and butterflies are attracted by the nectar too.

Of course, the downside of Mahonias are their sharp leaves. However, you can choose the variety “Soft Caress” which I have found to be just as resilient as my other Mahonias. The leaves really are fine and agreable to stroke, if you are in the habit of stroking and talking to your plants.

The only downside is that it flowers here in September when there are more flowers. It is also a smaller plant only growing to just over a metre tall. It is evergreen, like all the Mahonias, so still a beautiful plant for the early autumn.Mahonias are my sort of plants. I would love to hear about your tried and tested favourites. 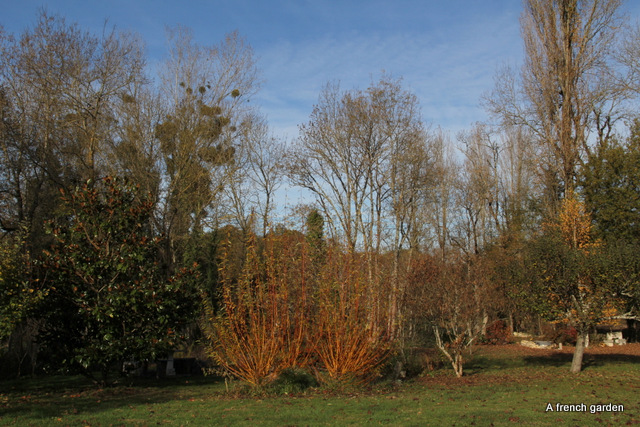 One of my better ideas in the garden are my willows which provide a welcome touch of orange and red at this time of year (November 2017).

We planted 5 Salix alba “Chermesina) in January of 2014 to encircle a favourite sitting spot.  A large fir tree had been taken down just behind them and the area felt rather naked.  We also planted a little Mahonia and quite a few spring bulbs. 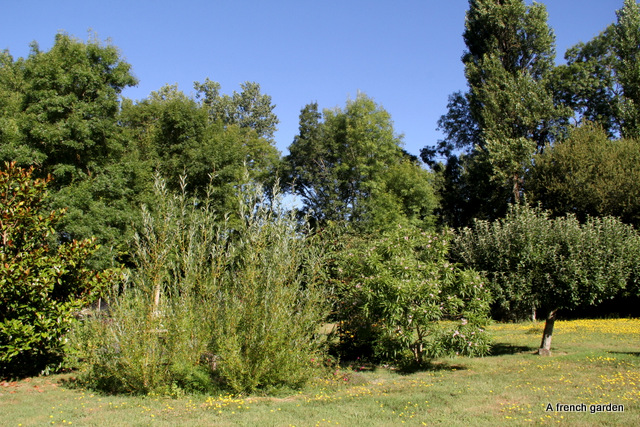 By July of 2016 they had made a very respectable screen but the bulbs had lost the battle along the way.  2017 tested their drought tolerance and it is important for us that they can survive dry summers.

The Mahonia that I had chosen is Mahonia eurybracteata “Soft Caress”.  It was “Plant of the Year” at the RHS Chelsea Flower Show in 2013.  I’m afraid that I was not very kind to it, planting it at the foot of such vigorous willows.  The idea was that the willows would shelter it from the strong sunshine but I think I misjudged the space it would need.  I find space very difficult to judge when you are planting small plants and not too sure of their growth patterns.  As the photo shows the flowers are not too impressive so I have decided to move it this year once we get some rain. 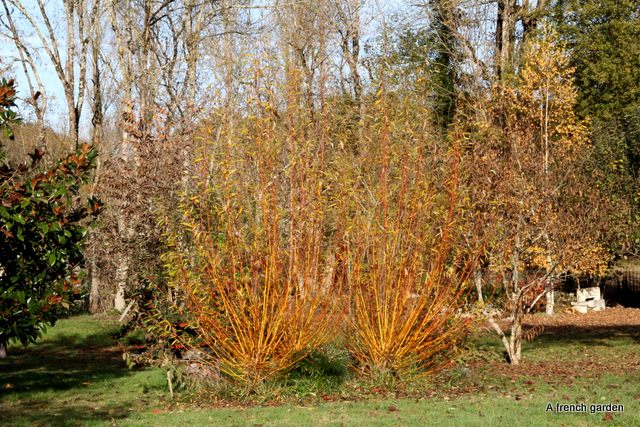 We will be cutting the willows back severely at the end of winter, as we have done each year, so that they produce the fine branches from the base.  They shoot up four metres high branches over the year.

It is good when at least some things go the way you intend them in the garden. 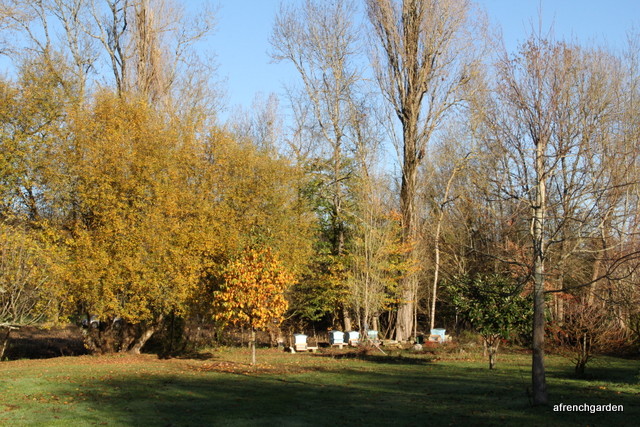 November has been mild, not always sunny but mild.  The large willow at the bottom of the garden is still holding onto its leaves. 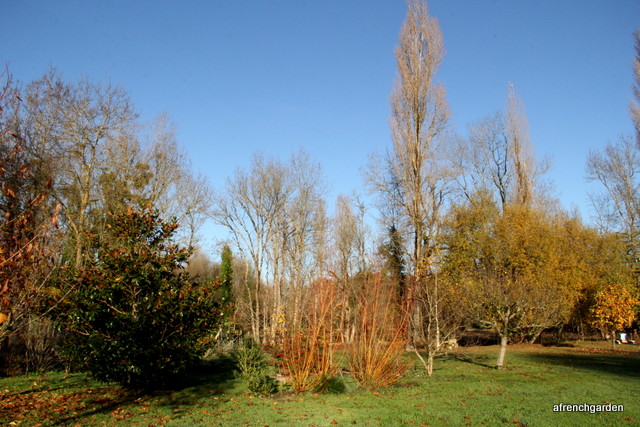 I am starting to get the benefit from changes I have made in earlier years.  This year the four Salix alba Chermesina (or Scarlet Willow) that I planted in January of 2014 are just how I had imagined them.  Unfortunately, they have been so vigorous that they are covering the Mahonia “Soft Caress” that I planted in front of them.  I had not paid sufficient attention to the flowering period of this Mahonia which is much earlier than I had expected, about the beginning of October in my garden.  This does not qualify it as winter flowering, so I must find it a better place.

Another 2014 addition was the Mahonia “Charity” which has put good growth on now and has lots shoots filled with flowers and buds.

The Mahonia is a magnet for bumble bees and it sounds like summer when I work nearby.

I have a large patch of Phacelia not too far from the Mahonia but it does not have the same pulling power at the moment and the bees do not stay on the flowers so long.

The star of the garden at the moment is the Anisodontea “El Rayo” ( I think the full name must be Anisdontea capensis “El Rayo”).  It was given to me by our friend Michel who could not remember the name and I understood it (wrongly!) to be a variation on Hibiscus syriacus which was attractive to bees.  As I have a lot of these Hibiscus I did not give it pride of place and it has only started flowering this autumn. 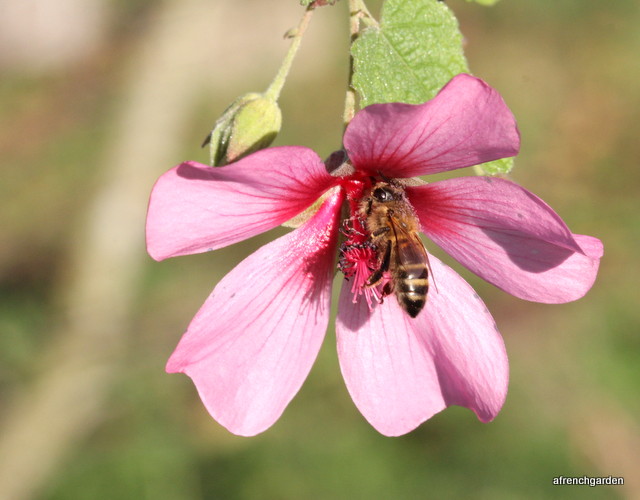 It is well appreciated by the bees who go for the nectar and the pollen.

It is not only the flowers that provide colour in the garden now.  The berries of the Leycesteria formosa are a pink/purple turning almost black when ripe.  I don’t see a lot of ripe berries so the birds must be helping themselves. 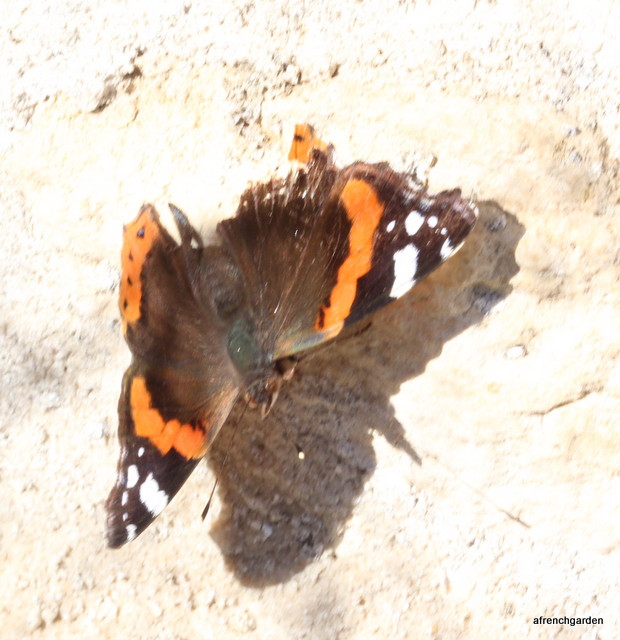 On the 27 November it was warm enough for a Red Admiral butterfly (Vanessa atalanta) to stretch her wings and warm up on the house wall.

I had not pulled out the old Cosmos to leave the seeds for the birds and to self sow but new flowers have appeared on the dried up brown stalks. 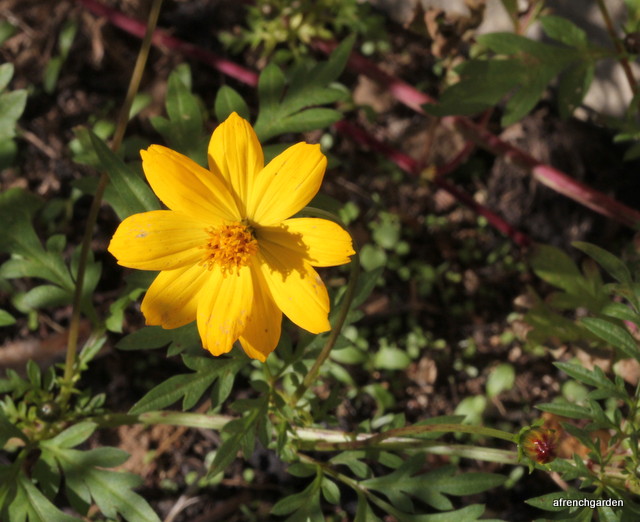 Underneath, a Cosmos sulphureus had already decided to go for it and not bother waiting for spring to germinate.

Even a wild violet that had strayed into the garden had decided to flower.

But December brought our first frosts and cold weather turning the violet into an iced decoration. 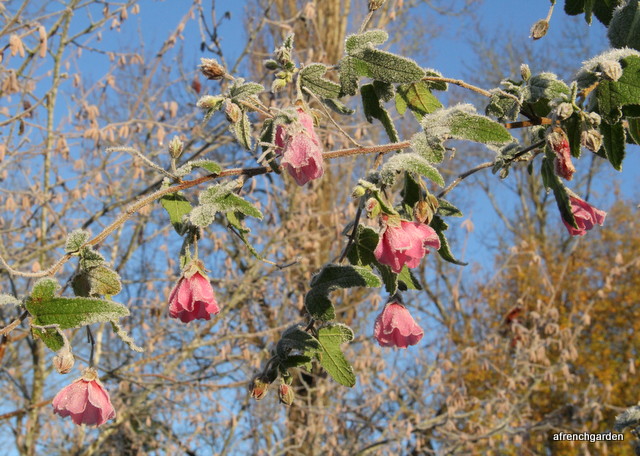 My new Anisodentea was completely frosted.

As did my Mahonia “Charity” with its delicate ice spikes attached to the flowers.  I had no doubt which of these flowers would survive the frosts as Mahonia is a well known winter flowering shrub but I was wrong!

After three continuous nights of frost the older flowers on the Mahonia have given up and turned white but the Anisodontea looks virtually untouched.  Today the honey bees were back on the flowers and a queen Bombus terrestris was availing herself of the nectar.

I have no idea how long the Anisodontea will continue flowering but today the temperatures were rising again and the forecast is good for next week. 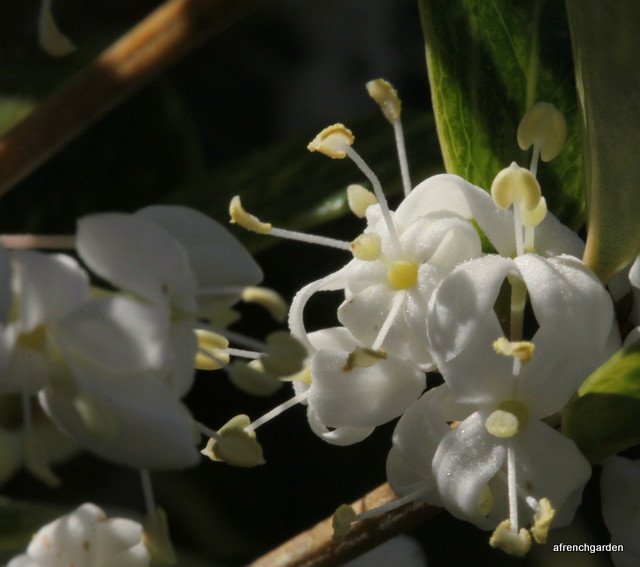 Some plants just seem to work harder than others.  My Osmanthus heterophyllus ‘Goshiki’ is full of flowers and these tiny flowers emit a heady perfume.

I wish it could be near a door but it sits in the shade of the wall to the back of the front garden, its glossy leaves providing a year long green backdrop.  The RHS suggests it should be pruned in April or May or after flowering.  We pruned it last spring and I think this is the reason for our heavy crop of flowers this year.

The Persimmon tree is holding on to a heavy crop of fruit this year.  I suspect some will soon be ripe enough for the birds to start to peck but the tree is too big to net.

The Medlar tree is heavy with fruit too this year but they will not be ripe enough to eat for a while yet.

I have made some discoveries about bumble bees.  The first is that they like Nerine bowdenii but the second is an identification that has been puzzling me for some time.  I am now sure that the bee above is an early bumble bee.  How come early in October you say?  Checking with BWARS they note for the U.K. the early bumble bee is  “bivoltine in the south, with a smaller late-summer generation”.

These must be Bombus pratorum queens, like the one in my saffron, but I have never seen any males or workers at this time of year and I wonder if some queens might come out of hibernation for a top-up of nectar before the final last months of hibernation.

I also decided to try and and find out the meaning of pratorum (I erroneously guessed spring but Latin was always my worse subject).  It appears that pratum is a meadow or hayfield so these are the bumble bees of the meadows.  May there be many meadows for all the bumble bees.

My Mahonia eurybracteata “Soft Caress” that I planted last year is just starting to flower.  I had not realised it flowered so early but that is fine, I have other ones that will come on later too.  I am just looking forward to see which of the bees find it first – my bet is the bumble bees.

Another “discovery” or surprise was that I was able to make apple cider vinegar from our glut of apples this year.  I love apples and we have been eating them raw, stewed and baked.  They have also gone into jams, jellies and chutney but the vinegar is a new product for 2015.  We can now take jars of our honey as well as apple cider to my daughter in the UK – sweet as well as sour.