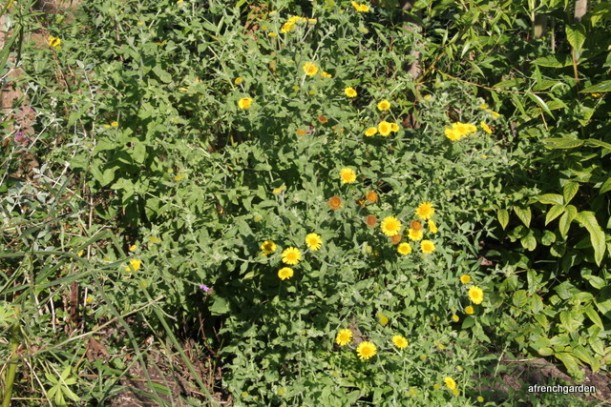 Pulicaria dysenterica, or Fleabane, is not your usual garden flower and I can just imagine you thinking – “That figures!”  I thought hard about bringing it into the garden as I was worried that it might be difficult to control as it seems to pop up on the roadside here in the summer time without any problem.  Actually it has grown taller and more shrub like in the garden and is quite attractive in the wilder part.  Time will tell if I have difficulty in controlling it. 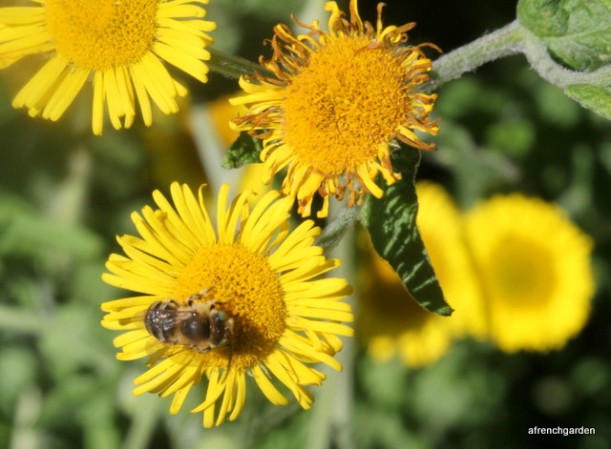 This is the reason I have it in the garden.  I love this green-eyed bee, which in turn loves the Fleabane.  However, this is my first picture of it this year but having the Fleabane in the garden may have saved me from heatstroke if I had been searching for it, as usual, outside.  July has been very hot and sunny. 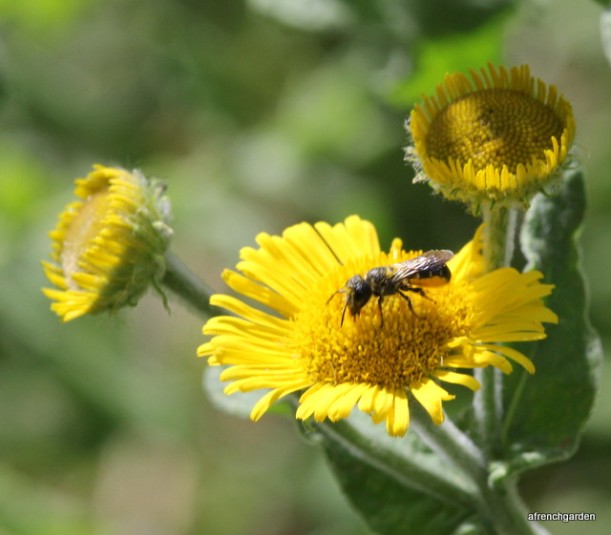 There are lots of other bees that come along, like this little Megachilae which I can recognise from a distance as it bobs its tail up and down on the flower to pick up the pollen on the hairs under her abdomen.  I think this is a very efficient method to gather pollen but this is the only time I’ve seen it used. 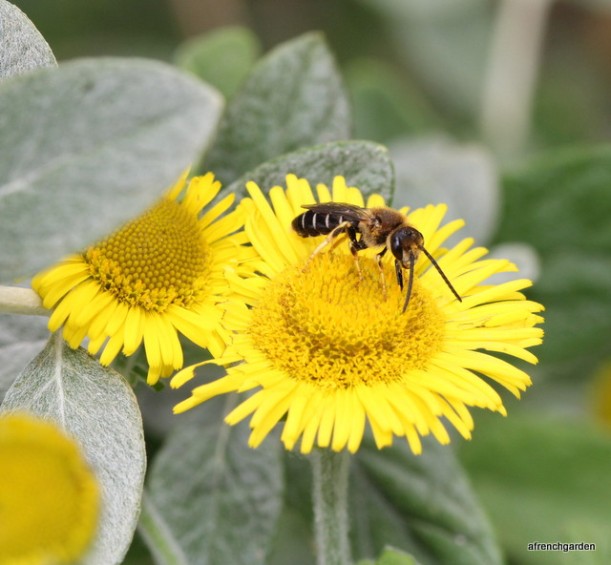 The different Halictes come in droves but my green-eyed bee remains elusive. 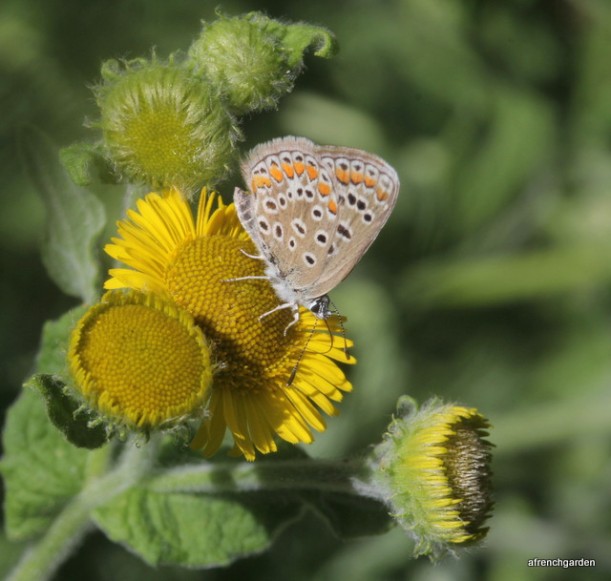 As I wait I get restless and snap at the butterflies that visit.  It is a very useful plant if you are keen to have a focal point to watch a lot of the pollinators around your garden.  As for herbal uses, it would seem to have been effective as a treatment against dysentery and the dried plants were among those used for strewing on the floors to deter fleas.  Perhaps not as useful nowadays, when we are not looking for a cure for cholera or something to control the fleas from a garden plant. 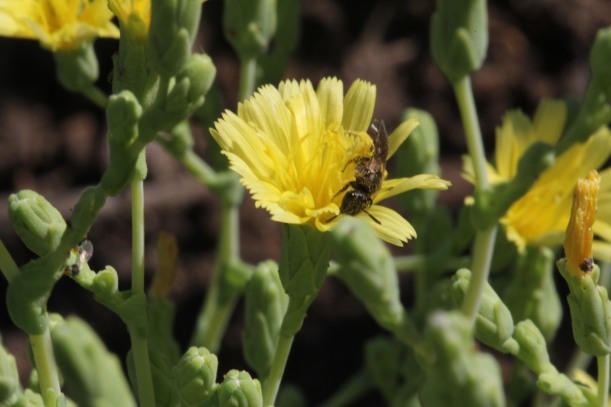 This year again I have decided to let some lettuce flower.  Last year I let lettuce flower to see what bees were attracted to it and again this year I found only some tiny bees bothered to visit the flowers, although it is hardly surprising as they are competing with the lavender and origano flowers.  This year I have let the lettuce flower because I want to collect the seeds. 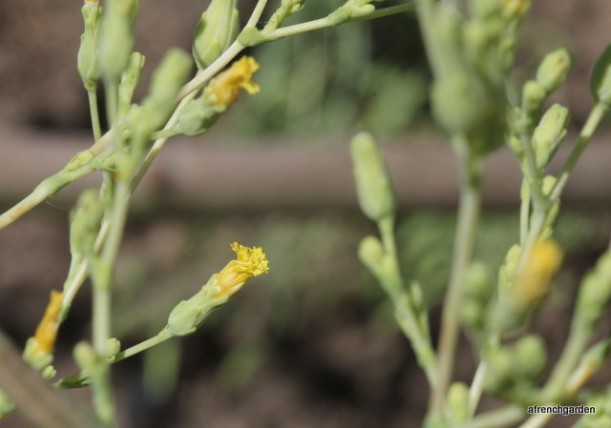 The lettuce flowers only last for one morning and then close in the afternoon. 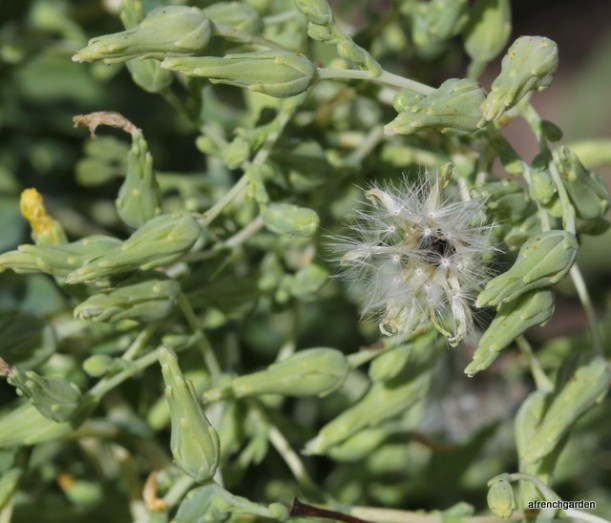 The seed heads are like little dandelion clocks and I pinch the seed heads off each day.  I decided to collect the seeds of our red and green leaf lettuce as lovely plants appeared in the front garden in the spring, obviously arriving with the garden compost.  However, we have had difficulty in getting the bought seeds to germinate so I am going to try DIY lettuce seeds. 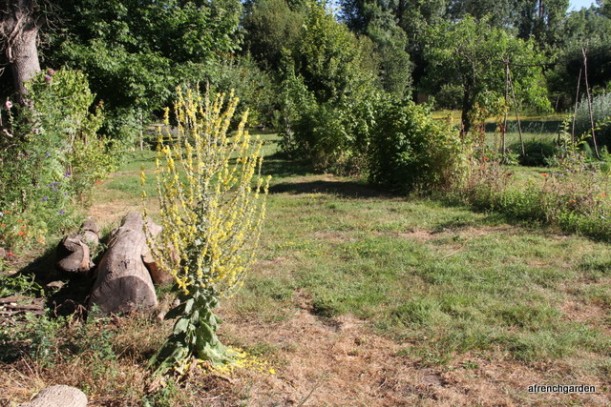 I have had several Mullein plants (Verbascum thapsis) self seed in the garden this year and I have found that they fit in very well and I like their tall candelabra shape.  This picture was taken in July. 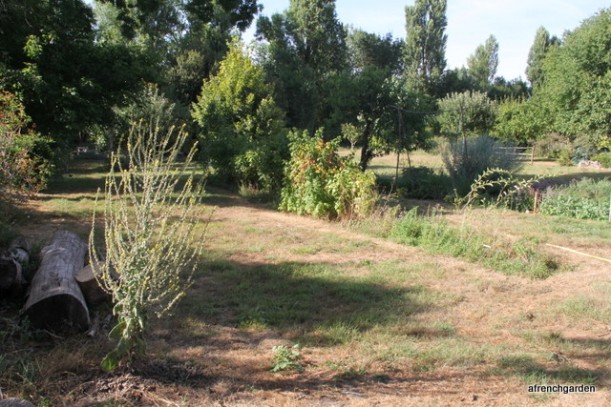 Now in August, most of the flowers are finished but I have decided to let it go to seed.  It is a biannual and is very easy to remove by cutting it at the base.  It has a tap root and its roots do not wander through the garden.  Its seeds do like some open ground and it prefers an open spot with plenty of sun.  I can think of a few suitable spots if I can harvest the seeds.

It is also regarded as a medicinal plant and the flowers can be added to tisanes.  The young leaves can also be used if taken before the flowering but in any case the tisanes should be well strained to remove and tiny leaf hairs which could cause irritation. 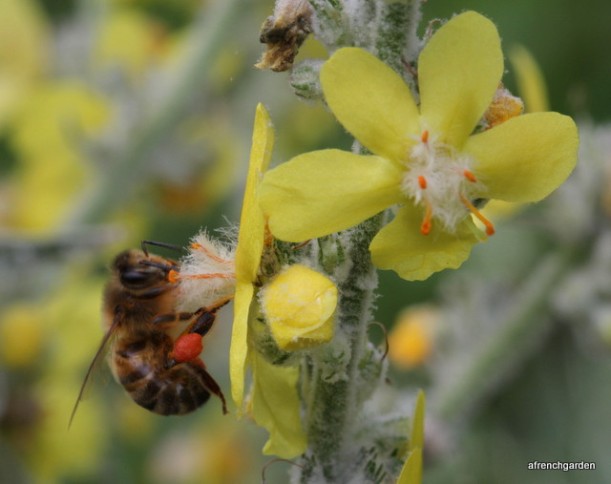 The reason I want to have a steady supply of the Mullein is to be able to watch all the different kind of bees that come each morning to gather the bright orange pollen.

As I take note of the flowers that attract the bees I notice how many of these flowers have been regarded as medicinal herbs in the past. 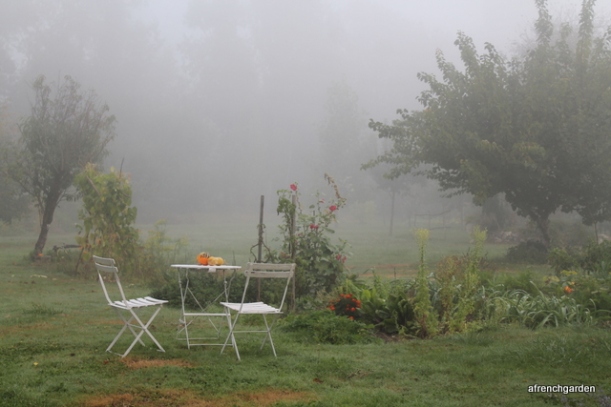 There is no doubt about it.  Summer is coming to an end. 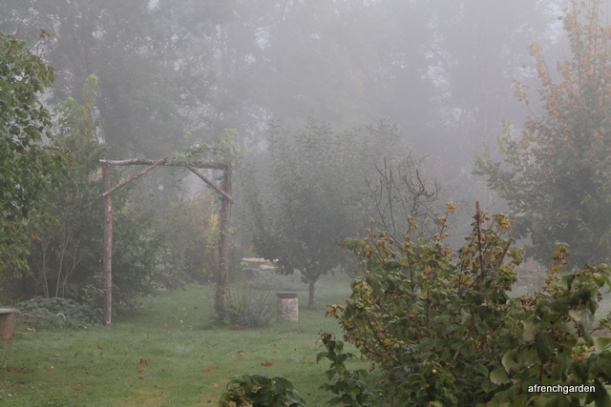 Still, September has been an amazing month and even after the occasional early morning mist the sun burnt through later on to give us sunshine. 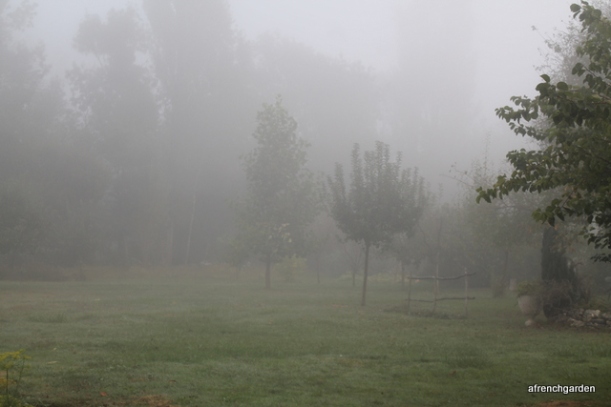 I have to thank my husband for venturing into the back garden in his pyjamas to capture these images!   I was too happy contemplating the mist from inside over my second mug of tea. 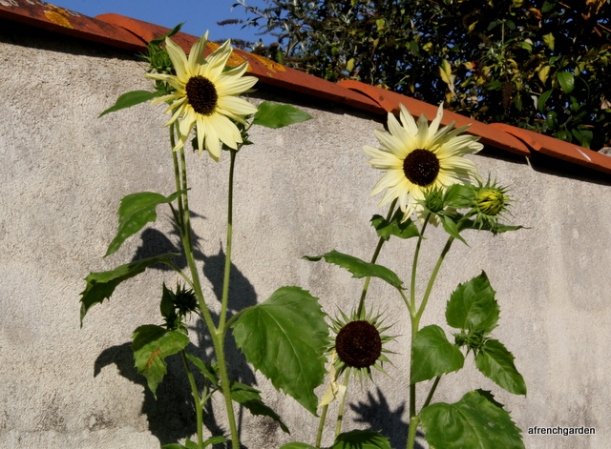 In fact, I’ve been doing quite a bit of contemplating about the garden.  I’ve been happy with my sunflowers Vanilla Ice and the darker ones which are the offspring of my last year’s Earth Walker. 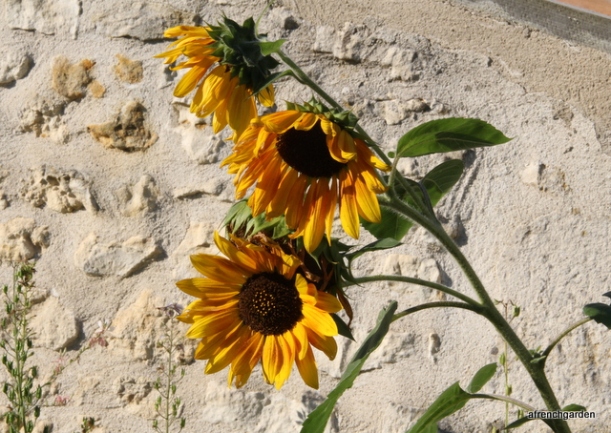 I can’t get enough of sunflowers.  I like the early single head ones and these multi-headed ones really brighten up the garden in the late summer. 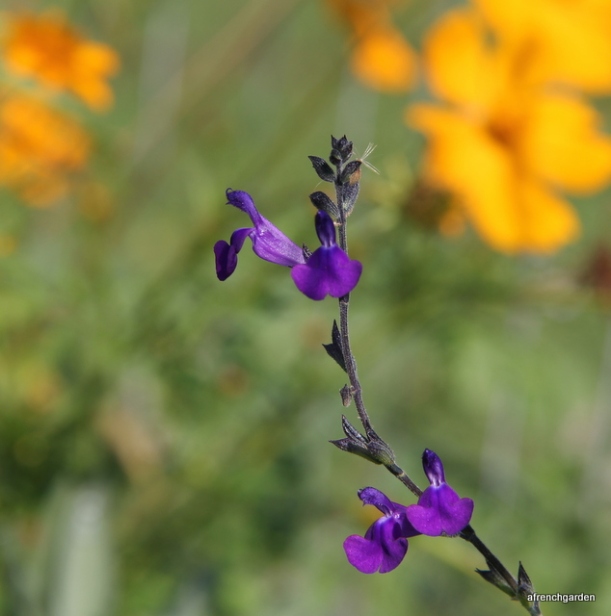 My new Salvia coahuilensis is going to be success against the Cosmos sulphureus once it has got established. 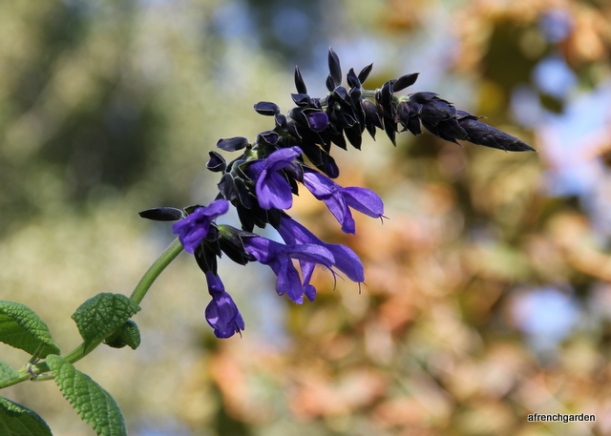 My Salvia guaranitica has flowered again.  I have to thank “Arthur in the garden” for the ID as I thought it was a Nepeta last year! 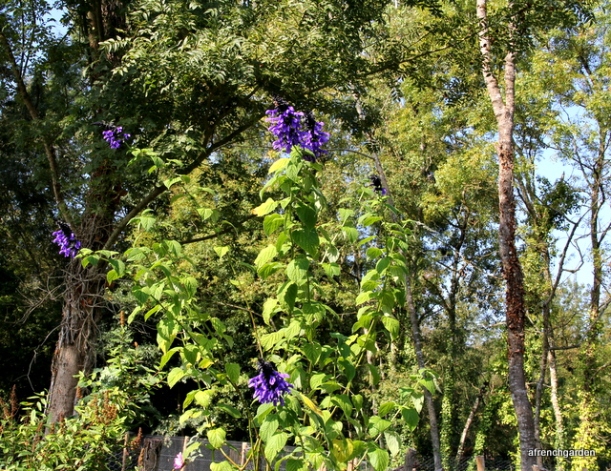 It grows so tall.  I never knew Salvia could grow so tall.  I would not have a chance of getting any close up photographs of bees on them unless I had a very tall ladder! 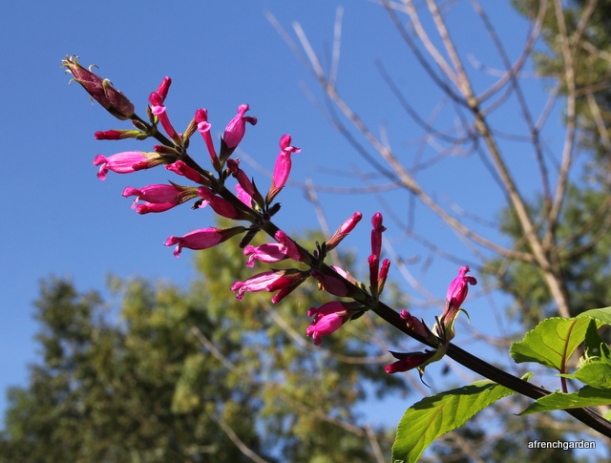 I have another beautiful tall Salvia grown for me from a cutting by my friend Linda.  This is not so tall and has very fragile stems and several stems bearing flowers have been snapped off – I presume by birds landing on them.  At least the broken stems seem to catch well as cuttings.  I’ve seen no bees on these flowers and I wondered if the flowers were too long for the bees to reach inside them, but I have now seen a hummingbird hawk moth happily flitting from flower to flower.  It stayed at each flowerlet for a long time drinking the nectar – long enough to get a really good photo – but I did not have my camera.

I have some really lovely tall plants now but I feel I am not showing the tall plants off to their advantage. 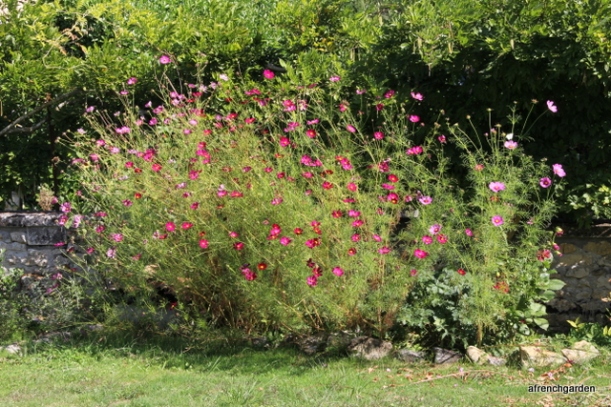 Of course, the plants themselves don’t play fair.  These Cosmos have burgeoned to more than a metre and a half tall.  I grew the seeds from a packet and then transplanted some here and others grown from the same packet I planted elsewhere but those were much shorter. 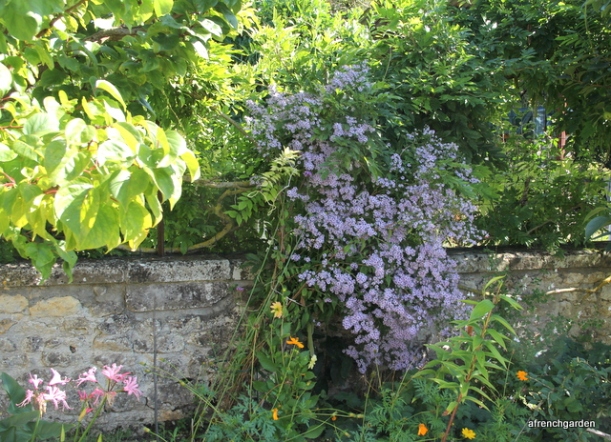 I tenderly cared for my Aster “Sweet Lavender” which flowered for the first time last year.  I bought it a fancy plant support in the early summer but  that turned out to be ridiculously too short.  It is tied up unceremoniously to the fence and looks very sad as if I am trying to garrote it. 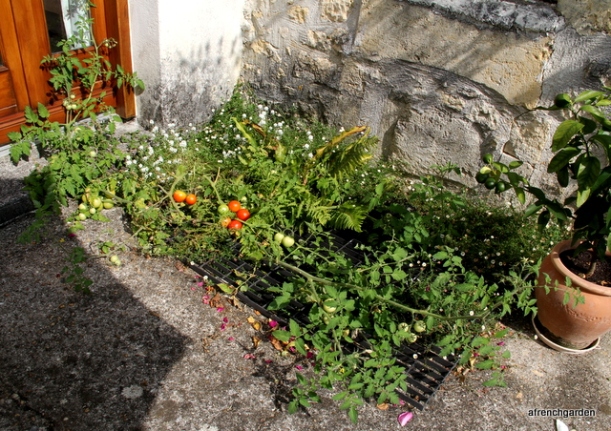 Plants don’t do what I expect of them.  This year the tomatoes in the vegetable garden put up a poor show but we let a little tomato plant that had seeded itself down the well continue to grow, to see what happened.  Actually, it has managed very well (sorry about the pun). 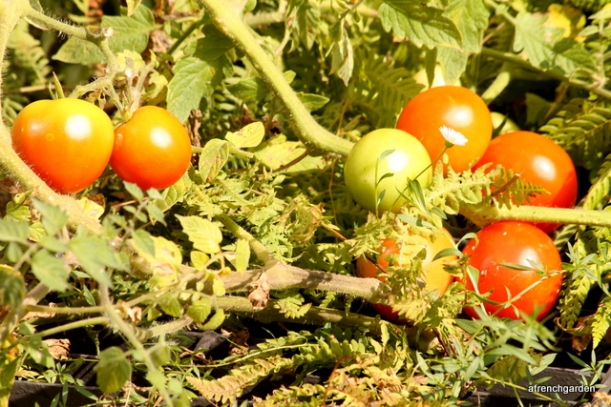 I don’t understand how an uncared for plant can grow on a stony well wall and then provide us with tasty tomatoes long after the ones in the vegetable garden have gone.

I must try and sort out my taller plants, I would be grateful for any ideas or suggestions.

A plant I have been very impressed with this year is the Common Fleabane (Pulicaria dysenterica). 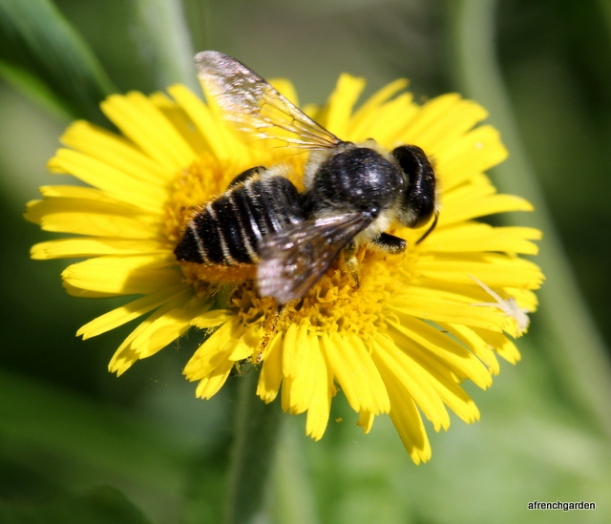 It is a wild flower but in late summer it is a magnet for all sorts of insects. 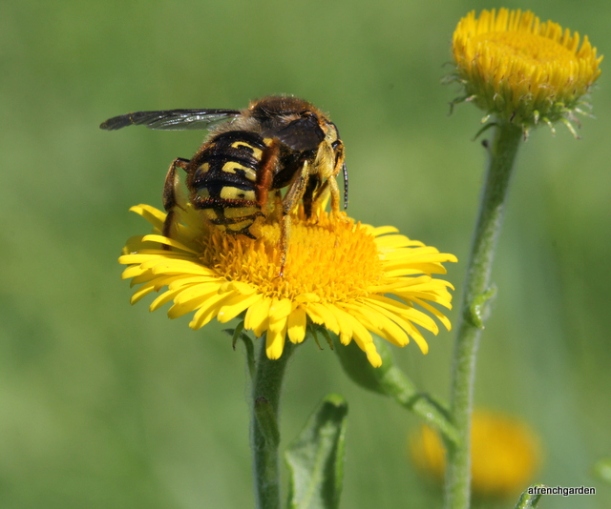 I have collected lots of the seeds and I want to introduce it to the wilder parts of the back garden. 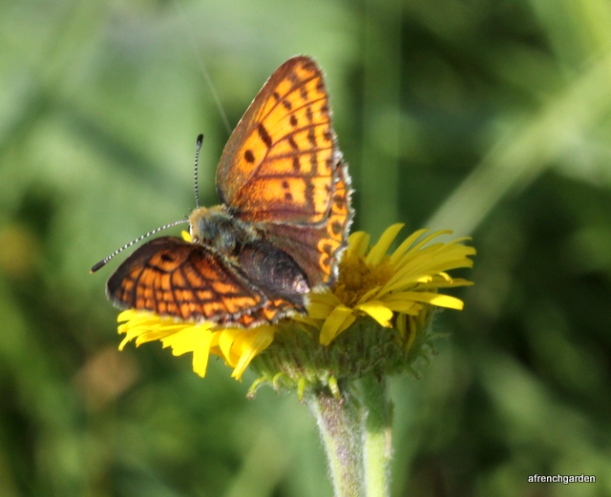 I think this might be a Fritillary butterfly.  The Common Fleabane does attract lots of different insects, it is just I tend to photograph the bees.  I am a little nervous of introducing a wild flower into the garden in case it gets out of hand but it is as attractive as many cultivated flowers.

My only worry is that it too may behave badly once it is inside the garden.