The end of September has been hot with days around 30 degree C, although now the weather has changed with clouds and rain showers but with warm day-time temperatures.  The star of the garden at the moment is the Heptacodium jasminoides which perfumes a corner of the front garden with its beautiful jasmine-like scent.  After the late spring this year it is nearly a month behind compared with last year. 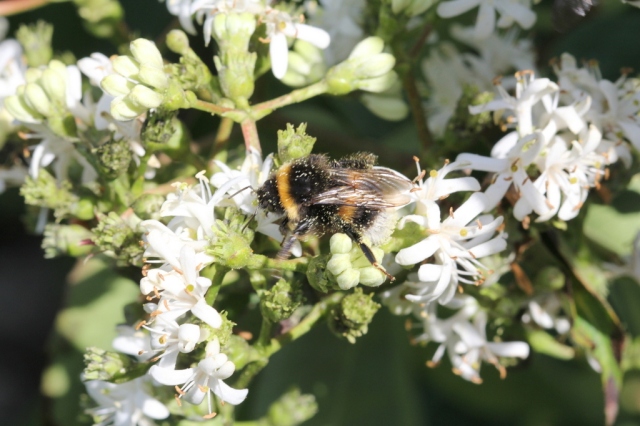 It is still covered by the white tailed bumble bees ( Bombus hortorum).  It surprises me that it is not the unanimous choice of all the bumble bees.  Perhaps because Bombus hortorum has a short tongue that she finds the nectar particularly easy to reach. 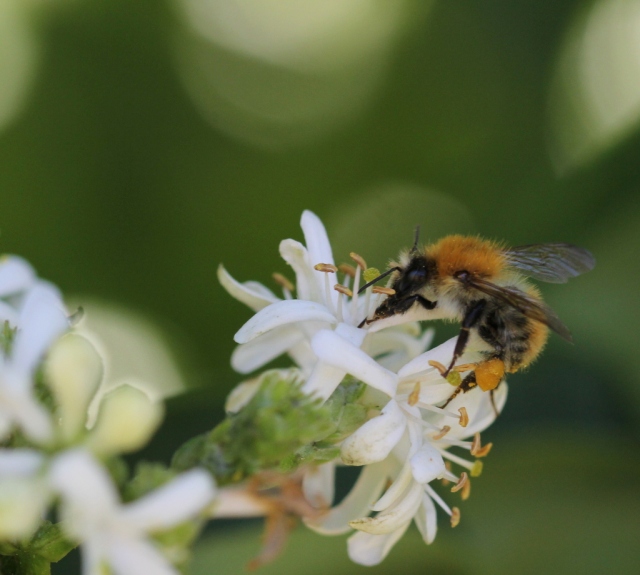 The carder bees come too but are much fewer in number.

The carders are happy to frequent the nearby fuchsia but have longer tongues so are likely to have to work less to get to the nectar.  My hardy fuchsia is still a mass of flowers and has been flowering right through the summer. 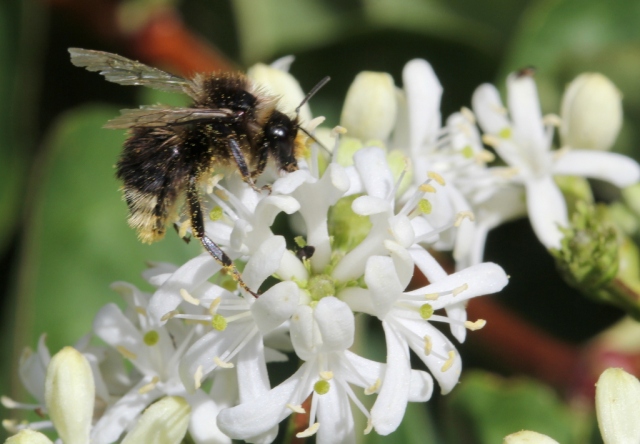 I have been watching this old bumble bee as she returns day after day.  Her wings are ragged, her colours bleached and parts of her thorax and abdomen have become bald.  I think she must be very grateful for this plentiful supply of nectar.

This is another visitor but I’ve unfortunately no idea of the identity but the white tailed bumble bees are content to share with all comers. 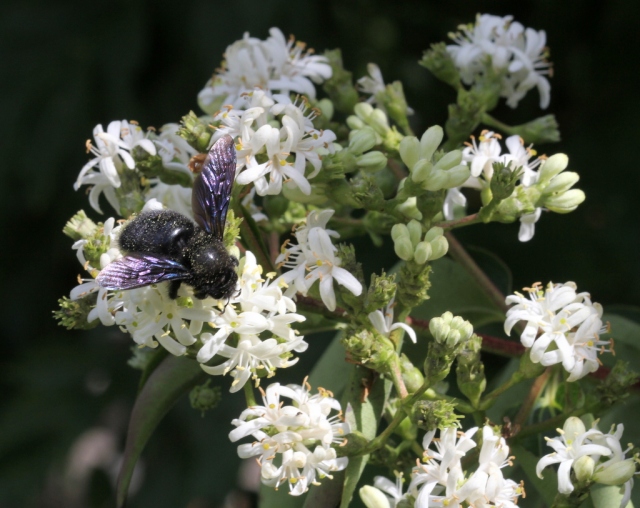 This year the carpenter bees (Xylocopa violacea) have been more numerous, perhaps attracted from the nearby Wisteria that has had flowers on it throughout the summer.

The late spring has been responsible for differences in the garden this year especially with the fruit and vegetable.  The first fruits such as the early plums and apricots never appeared and the tomatoes seemed to have had a problem getting started; the fruit ripened late and the last tomatoes have rotted on the vine despite the warm weather.  Not even any green tomatoes left for green tomato chutney.

On the right my “Sungold” baby tomatoes tried to put up a good show but rapidly gave up the ghost a few days ago.  They were no way so plentiful as last year but I forgive them as they were sufficient for our needs.

On the other hand the mass on the left is my sweet peas, which I have not forgiven.  It was my last effort at trying to grow sweet peas and I succeeded in producing one flower about a month ago which I cut immediately to promote the production of masses of flower heads.  Ha!  I give up.

I have had better flowers from the dwarf beans that my friend Michel gave me and I planted on the 27 July.  They have produced lovely fine beans. 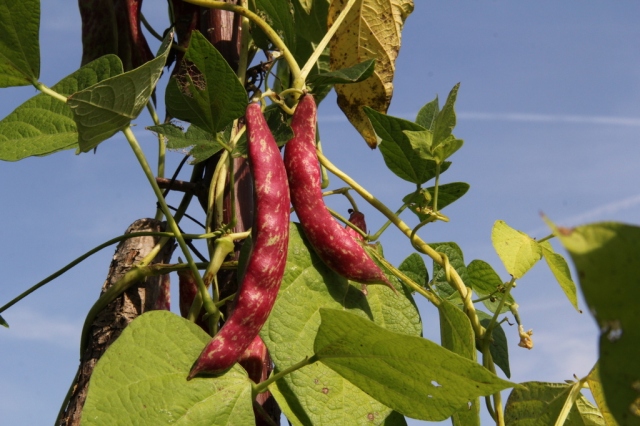 I am luckier with my beans.  These are borlotti beans and these too have lovely flowers.

I wondered who might pollinate these flowers and I was not surprised when I caught the carpenter bee on them at the beginning of September.

The actual beans are a beautiful pale green and then become speckled when fully ripe.  I have been converted to a Borlotti bean fan by reading Sarah Raven’s book “The great vegetable plot” and use her recipe for the beans as well as for other things.

Another success of the moment is my asters “Sweet Lavender” bought half price from the Savill Gardens in January.  I’ve never had these tall little asters before and I like them a lot.

I’m still looking for inventive ways of using my apples.  I found a recipe for green apple sorbet on the Internet.  They used Granny Smiths but I used my green Golden Delicious, not really believing that the sorbet would stay green.  It did and as the apples are raw and have only a little sugar added it is much healthier than the normal sorbets cooked with a sugar syrup.  It is best eaten straight out of the ice cream maker as it is more difficult to defrost later – but not impossible. 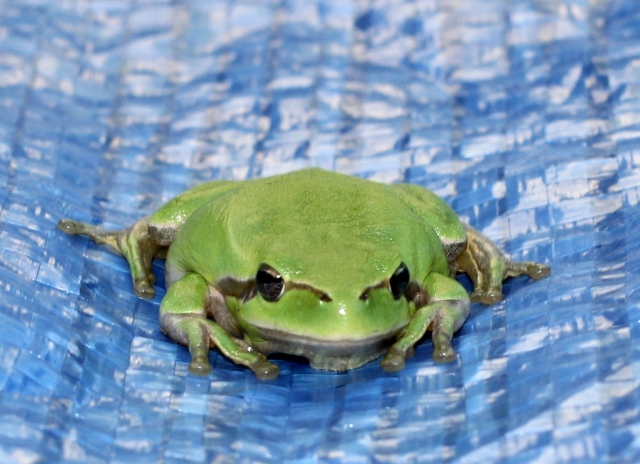 I have now accepted that autumn is here.  My little green tree frogs croak at me from the patio in the morning and hide in the plastic cover of the outside table.

There are mushrooms growing in the garden which is very convenient but something else has appeared around a spindle tree.

It makes the tree look as if it is growing out of some giant pie crust.  It does not look too good for the spindle tree and I think we should maybe cut it down.  If it goes to the bottom of our “to do” list in the garden it will be a little while yet.

36 thoughts on “The last days of September”