The trees are starting to have brown leaves.

Some of the leaves are starting to fall.

The new little Tetradium daniellii, tree which flowered for the first time last year, has not flowered this year and its leaves are turning yellow.

Luckily, I have another established Tetradium and my new little tree turned out to be a female and the flowers produced seeds. I planted them last December, just to see what would happen and now I have a little seedling!

The Caryopteris in the front garden is still flowering well and attracting the bees. Last year we cut it back after it had flowered so there was a considerable number of cuttings. I don’t know if it was the correct timing but Kourosh put six cuttings in a pot and they all took!

We put the cuttings in various places in the garden to bide their time until finding permanent homes and now they are flowering! That is quite a success story, so it must be an easy plant to take cuttings from, so if you have some in your garden…

The cosmos add so much colour to the front garden at this time of year.

The cosmos make great landing spots for all types of bees.

They are also a good source of pollen.

This year I noticed the honeybees on the sedum before it was completely opened.

I associate sedum more with bumblebees and butterflies but this year has been different, perhaps because we had such a dry August.

This year we had less summer honey than last year. Now we are treating the bees against the varroa mite with thymol which is a natural extract of thyme oil. It has a strong smell and the bees do not like it but Violette makes the most fuss.

It was quite hot on Monday so Kourosh supplied her with a parasol but she was still unhappy. As long as it makes her scratch the horrible mites off, then it will be worth it.

This week white cosmos have started to flower everywhere in the garden. As they are mainly self-seeded I do not understand why the white coloured cosmos have flowered later than the pink/lilac ones.

A new season is coming but it is reassuring to find a baby marbled newt (Triturus marmoratus) in the garden. Everything has been so strange and disturbed this year that it is good to see that these newts have continued to breed in the garden.

The Cosmos in the garden are a motley crew.  Most of it is self-seeded from last years plants. 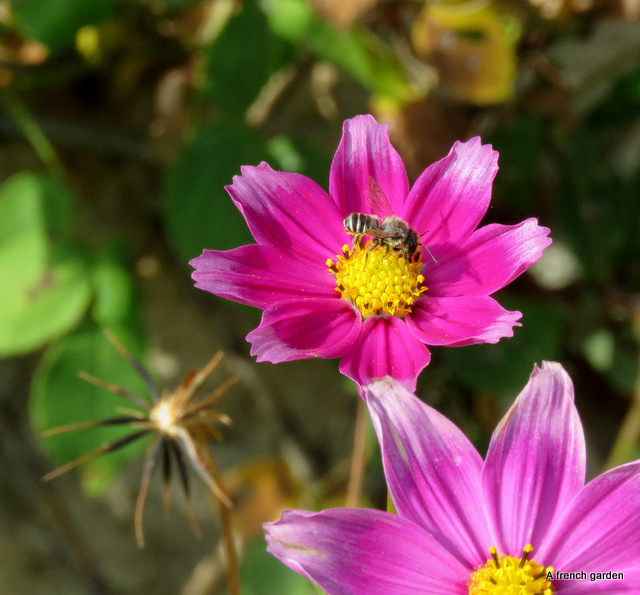 The bees have no care for floral coordination of the garden but I suppose we have them to thank for the multitude of seed heads around the garden. 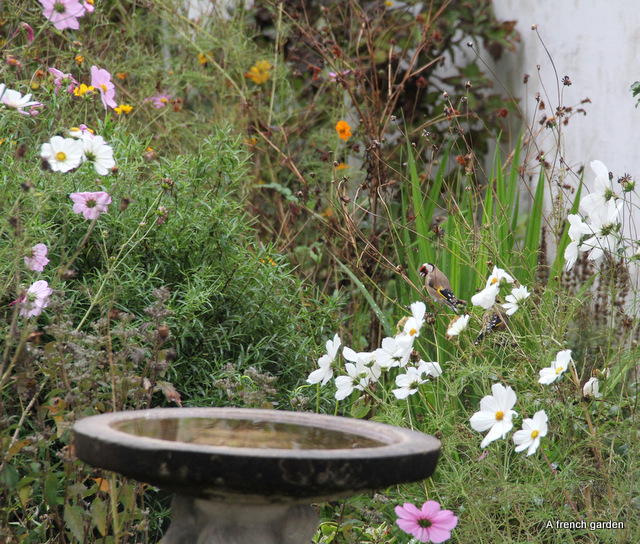 So now in October we have the Cosmos plants attracting the birds.

Kourosh has noticed that they often arrive in pairs and you can see that there are two in this photograph if you look closely.

The Goldfinch (Carduelis carduelis) is one of the most colourful birds we see in the garden. 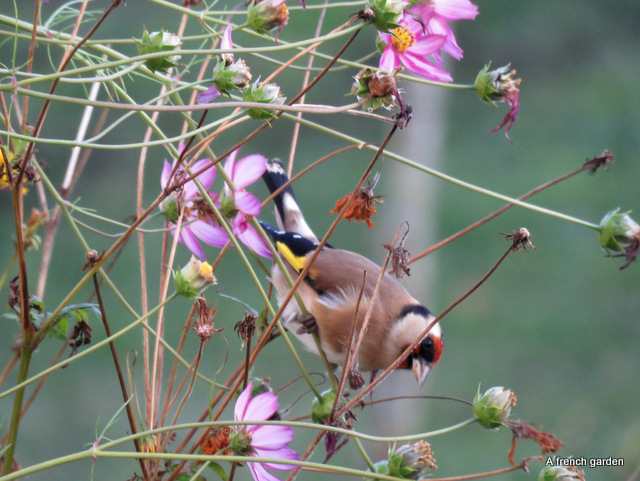 They give me a great reason for leaving the Cosmos free to seed and to delay any tidying of the garden.

I’d rather have the Goldfinch than a tidy garden.

It has been a difficult summer in the garden.  The best laid plans have been scuppered by the heat and lack of rain.  I had sown Cosmos suphureus seeds by the vegetable garden to have lots to plant for a bright August garden.  However, the heat and lack of any rain did not allow me to move anything.

It’s not all doom and gloom, I did manage to coax some Rudbeckia and Cosmos to flower in the front garden and the bees still enjoyed the flowers even if they were in the wrong place. 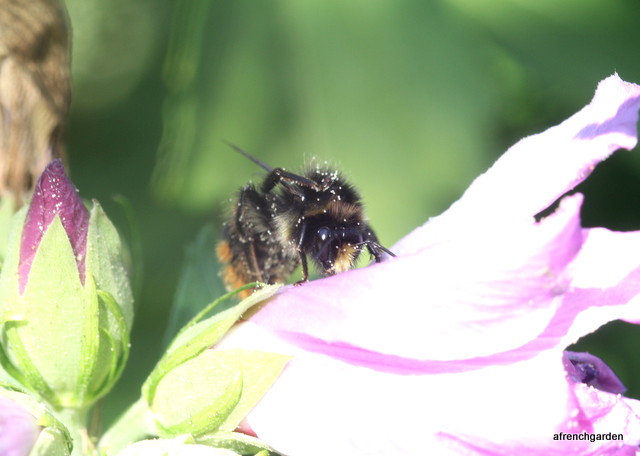 There are hardly any Hollyhock flowers left so the bees are obliged to visit the Hibiscus syriacus.  They are not as popular as the Hollyhocks and I wonder if it is because their pollen is a lot stickier?  This male bumble had to spend a long time grooming after his drink of nectar.

I have been given another Hibiscus which our friend Michel had grown from one in his garden.  This one has a much lighter open growth and has more than one stem.  In addition, the honey bees like it.  It has five petals and a shorter pistil proportionally to the H. syriacus. 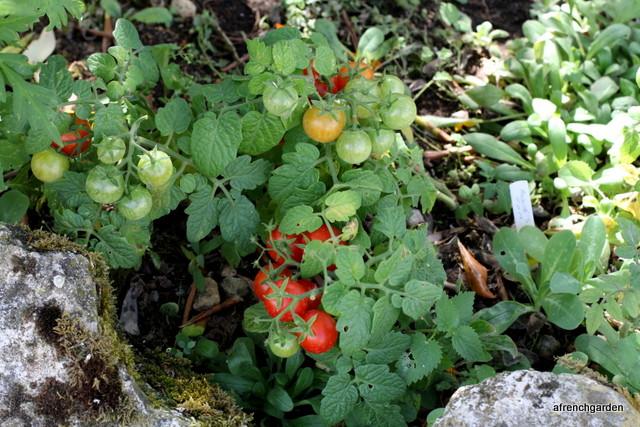 Gardners love to share their treasures and when my cousin and his wife, Annie, visited us from Seattle in the summer of 2014, Annie brought seeds of Red Robin tomatoes that she had saved from year to year for twenty years.  I was delighted when this spring I got a large crop of seedlings.  I planted them throughout the garden and then watched as they failed to thrive and disappeared (homesickness?).  The only clump that survived was under the olive tree, I do not think they could take the full sun this summer.  Now I have tasted these tiny tomatoes I have decided to collect my own seed and I think I will be able to choose better places for them next year.

Then there are the gifts of unknown species.  This was given to me by my sister as “You know that tree with the red leaves” – (you will note the plant does not have red leaves.)  It has taken me a year but I have deduced that it could be Cotinus.

At the same time she had potted up a cutting of – “You know that plant with the blue flowers that the bees like”.  It was quite a small cutting and the bees like quite a lot of blue flowers.  Never the less, it was a good cutting and it survived tucked away forgotten under larger neighbours until its blue flowers poked through a few days ago and I saw the first Caryopteris I’ve ever had. 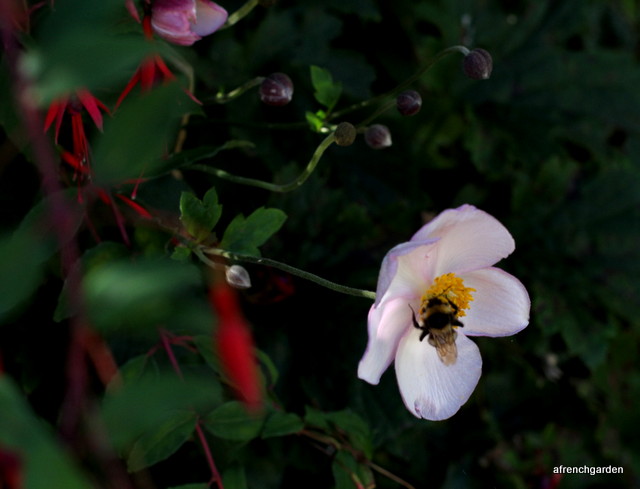 I’ve even forgiven her for giving me pots of her Japanese anemones when I was starting the garden.  I found them so invasive that I have spent the last years systematically, but unsuccessfully, rooting them out.  Today I noticed a bumble bee on one that had cunningly concealed itself under my large fuchsia.  Perhaps if the bees like them I could permit a few to survive.

I freely admit I am totally biased when it comes to plants that provide for wild life, especially bees.  At this time of year in France many of the streets in town centres are lined with Lagerstroemia indica, usually the pink flowered trees.  They are popular garden trees as well, but I had found them gaudy.  I was very surprised to see how beautiful the bark was in winter.  I craved the beautiful bark in winter but the pink flowers were still too gaudy for me until Michel pointed out how the flowers attracted the bees. 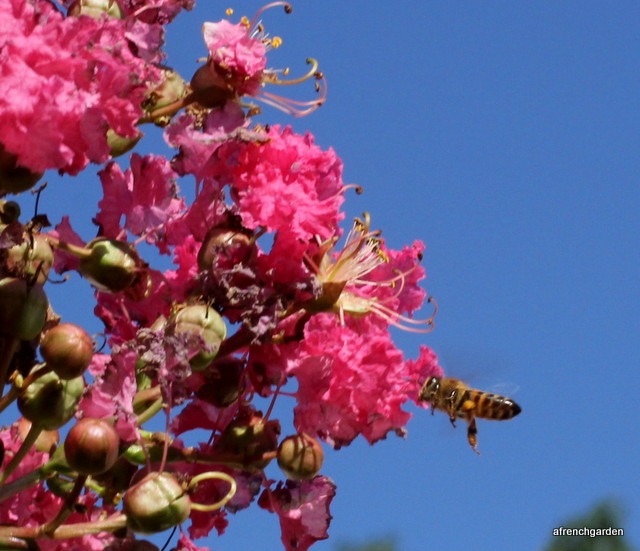 It changed my perspective on the tree and it did not seem quite so gawdy but instead appeared an ideal tree to brighten the garden in summer and add interest with its bark in winter.  Is this opinion shift common in gardeners?  Do we mellow to certain plants over time? 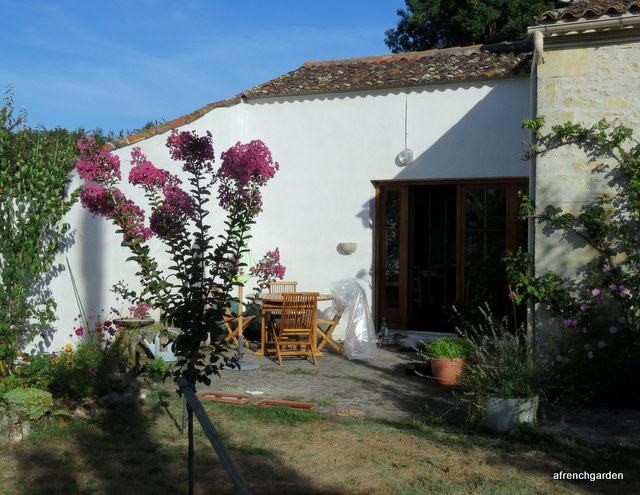 So last week we were delighted to receive a present of  a pink Lagerstroemia indica which was planted with great care in the front garden.  Now I have to wait to see how long it will take for the formation of the fascinating bark. 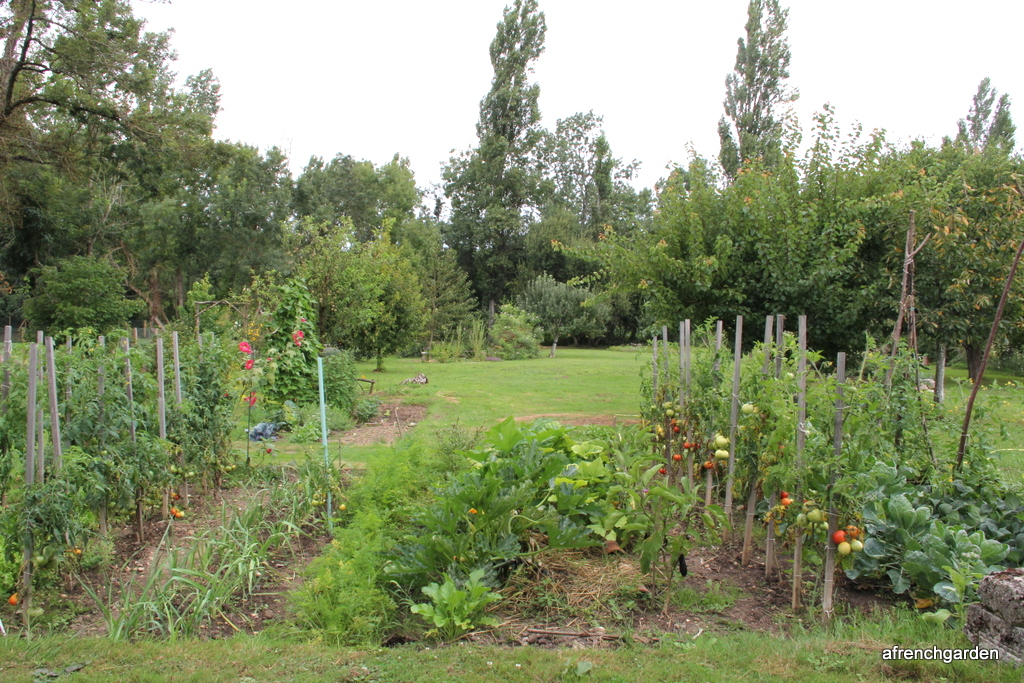 It’s the middle of August and the grass is green!

In the summer the vegetables get watered and any of the new or less drought tolerant plants but not the grass.  The grass gets left to go brown and anything that grows up after it rains is mowed.  However, this year the rain has kept the garden and usually the vegetables sufficiently watered.  My neighbour, Annie, who has gardened here for many years does not remember a year with such constant rain.  In between the rain there has been plenty of sunshine and the temperatures have not been low.

After the first blossoming in the spring the Wisteria usually blossoms another once, sometimes twice, later in the summer but this year it has hardly stopped flowering. 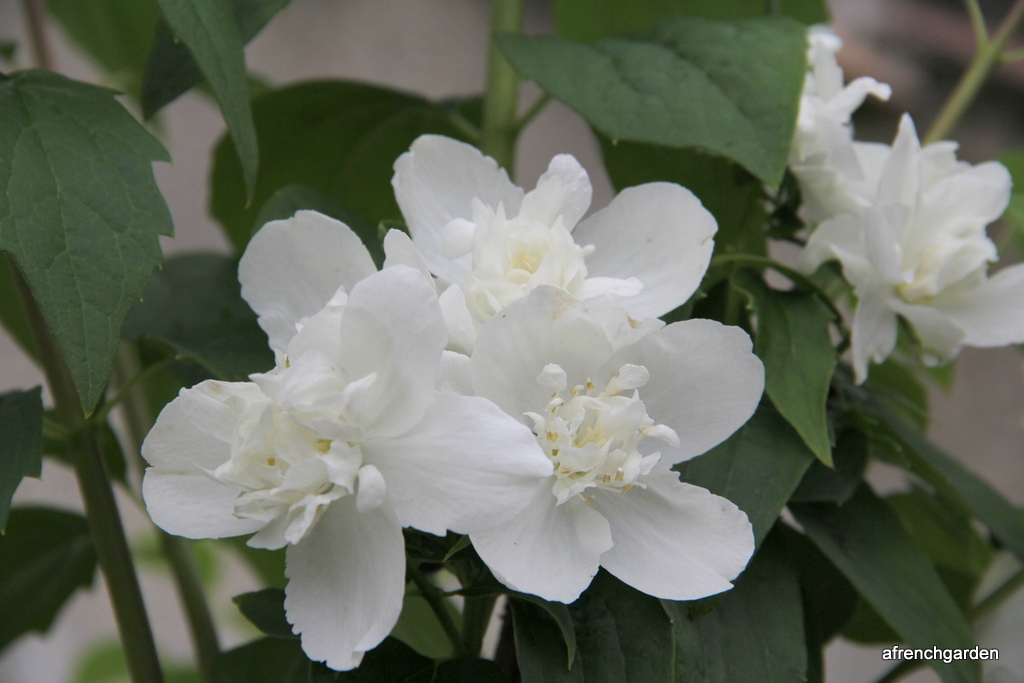 Even the Philadelpus that I cut back heavily after it flowered in May has decided to push out a few more blooms.

That’s the problems with plants.  They don’t do what you expect them to.  I like to have Cosmos in the garden in late summer to add some colour and give plenty of flowers to cut.  I sowed this “Sensation mix” for the border, the  120 cm. marked on the seed packet seemed a good height for the borders.  However, these are now taller than I am and are hiding a sunflower I planted behind them. 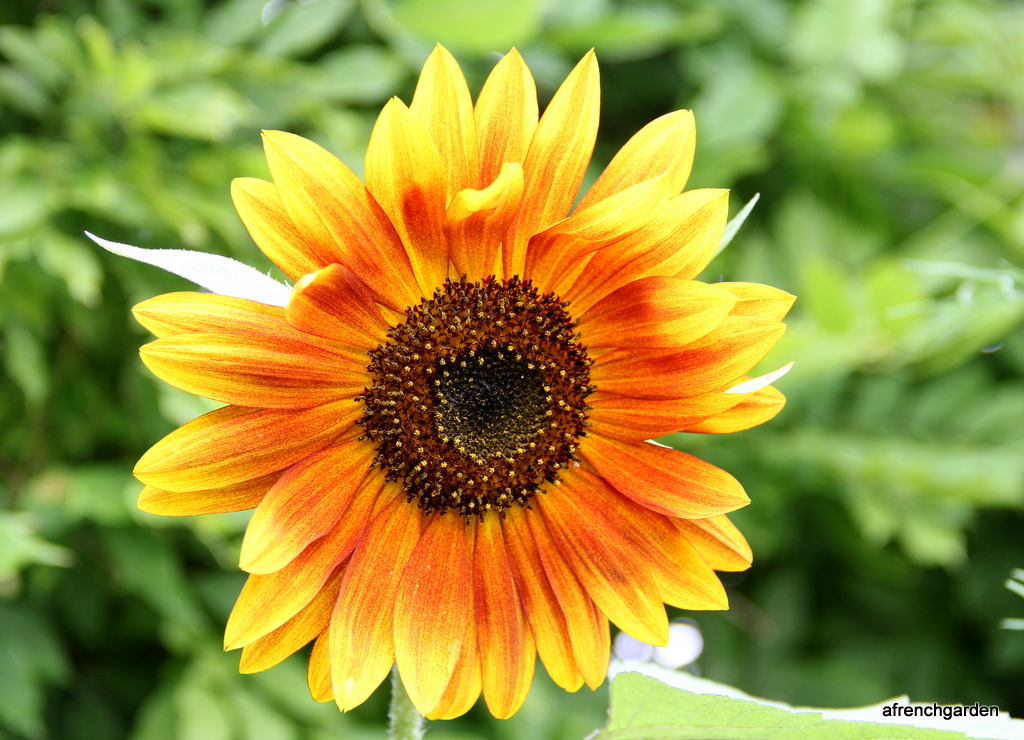 The sunflower they are obscuring is grown from the seeds I kept from my “Earthwalker” variety which has not bred true but it is a very attractive colour all the same.

Returning to my Cosmos problem some of  the Cosmos on the other side of the garden have kept to their expected height – but not all.

I am a bit disappointed with my pallid “Vanilla Ice” sunflower.  These ornamental sunflowers seem to flower later and be more delicate plants than the plain ones my husband sows from the birdseed.

This year I sowed Asters for the first time.

A 60p packet of “Duchess mixed” bought in the UK has provided a lot of colour.  I bought them to attract the bees but I have not seen a lot of action around them yet.

But this Halictus scabiosae bee was using the Aster as shelter in a windy day and did not want to be disturbed. 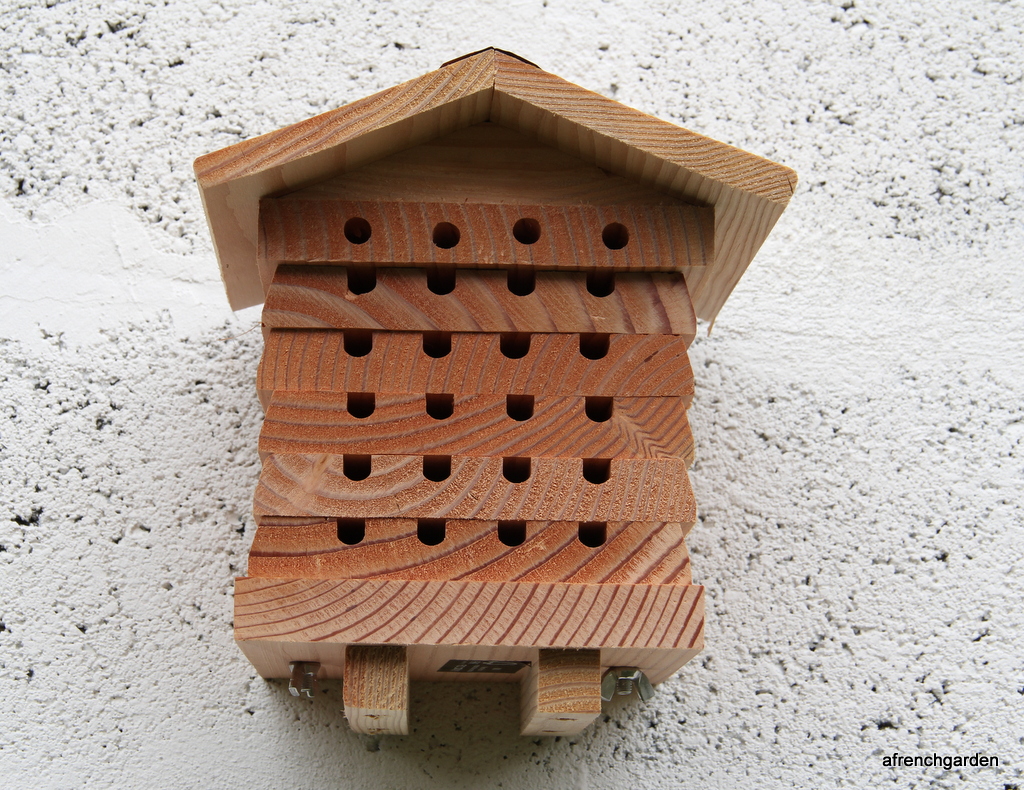 This week I bought a new bee box from Amazon.  I am quite excited as it can be taken apart in the autumn when the bees are finished laying their eggs.  I thought the design was simple and innovative.  The holes look rather large but I have been surprised by some little bees tackling large holes or canes.  It is a bit late to put one up so I may get nothing this year. 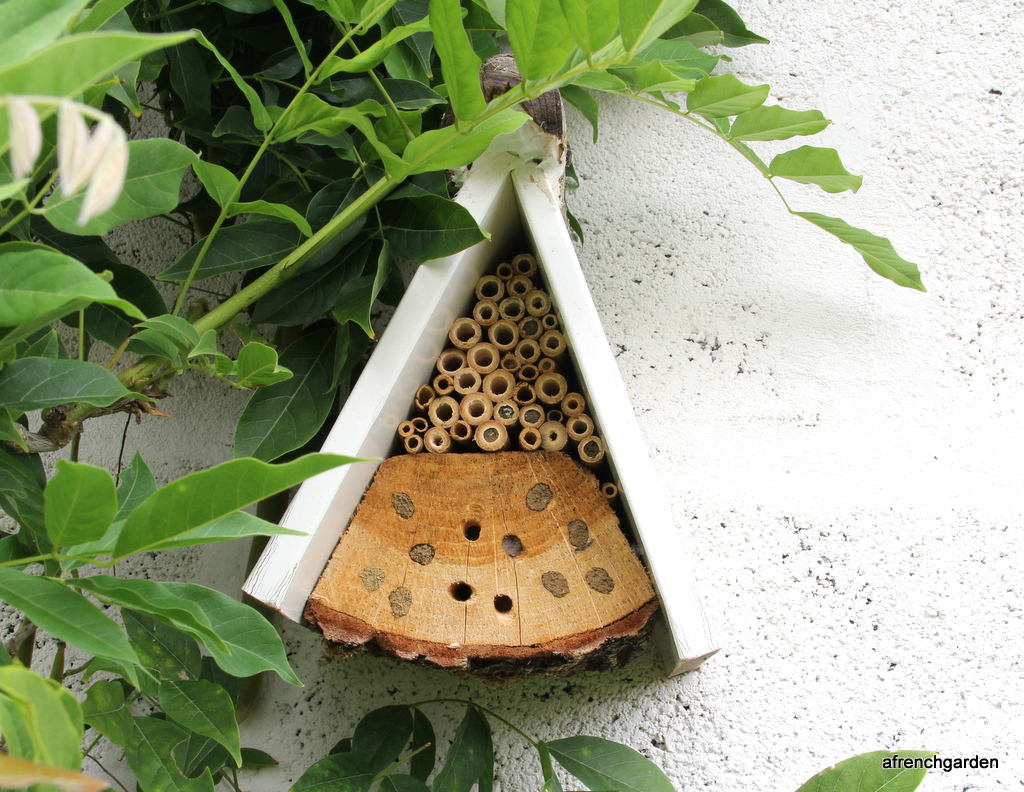 The newest “husband made” box has almost got a full occupancy.  The three holes that look empty on the log are in fact partially filled.  Some bees appear not to fill the holes or canes fully.

These tiny Megachiles are very busy at the moment and I wonder if they will be tempted by the new box.  Some people are concerned that the bee boxes can be parasitised and prefer to use paper tubes that can be opened to remove and clean the cocoons.  I asked on a bee forum and found that opinion was very split on this.  It has to be born in mind that parasites are part of nature and if you accept one part you have to accept the other.  I think the bee boxes are fascinating and a wonderful way to observe some of the bees.  My box originates from Wildlife World which is a UK company that supplies tubes and paper liners that I might try, although they do not deliver outside the UK.

The other evening we had a surprise visit from two pairs of hoopoes.  We had never had four hoopoes on the lawn before!  They made themselves at home and were extracting lots of juicy looking treats from the moist grass.  They came right onto the patio and helped themselves to some bird food.  We were very hopeful that they would become permanent visitors but unfortunately that was the last we saw of them but we can always hope that they’ll come back!