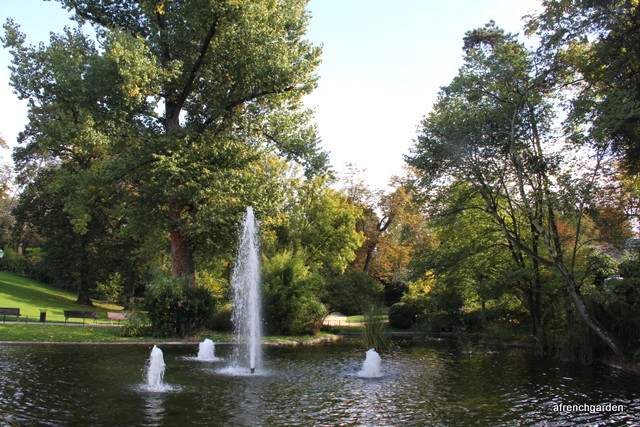 It was a beautiful day in October, when mellow from a very enjoyable lunch we decided to enjoy the sunshine and walk through the park in Cognac.  It was many years since we had visited the garden but although I noticed improvements, the structures that had delighted me years ago had been left intact (or preserved).

Water plays a major role in the garden which extends over 7 hectares (17 acres).  The town bought the first part of the gardens (including the building now used as the Town Hall) from the Otard family.  This family bought the close-by Chateau of Cognac (birthplace of Francis I) in 1796 and the same family are still producing Cognac and storing it in the cellars of the chateau.

I like the moulded tree struts of the bridge which is quite in keeping with the grotto in the distance.

The design of the gardens was the work of the landscape gardener Edouard André who started of life as a gardener at the Muséum d’Histoire Naturelle in Paris and was given the task of remodelling these gardens in 1892.  He specialised in fountains and grottoes and worked internationally, including in Sefton in the U.K.

I love the mystery of grottos and the sound of running water.

We have a fair number of stones in our garden and Kourosh has produced some rockeries and dry stone walls; I wonder if I would be pushing it to suggest he try for a grotto?

The folly would be one step too far for our garden but looks perfect in Cognac.  Otherwise called the neo-Gothic tower it was built in 1835 and is octagonal in shape.  It is having work done on it at the moment and I believe it will have a moat surrounding it in the future. 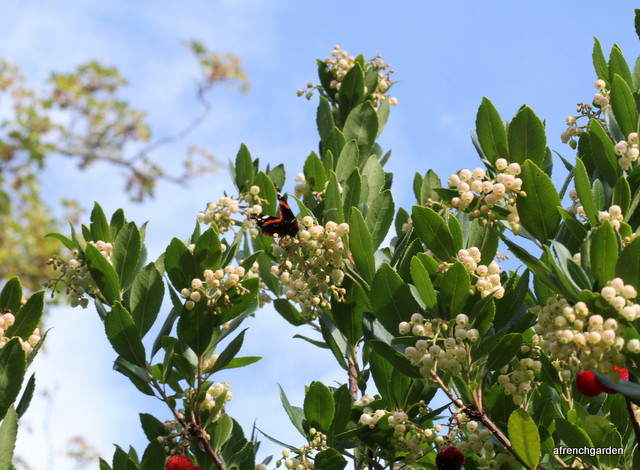 I had seen all of the park before but what I noticed this time was the number of plants providing nectar for pollinators.

The arbutus unedo or Strawberry trees were full of this year’s blossom and last year’s fruit.  I’ve read that honey from the Strawberry trees has a rich chocolatey/coffee flavour which I would like to try. 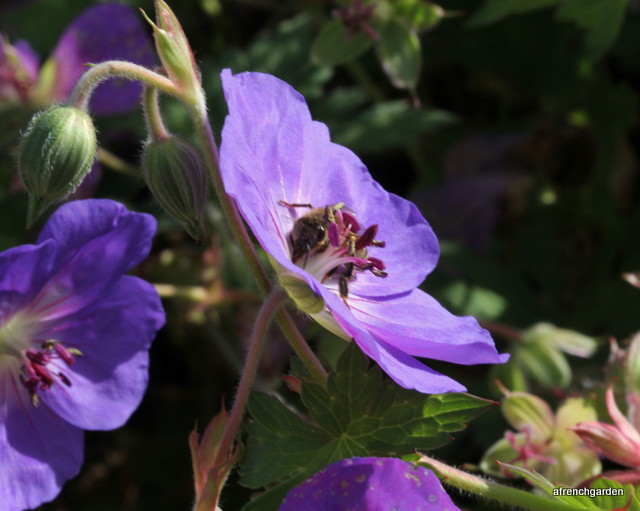 This honeybee is on a Johnson’s blue geranium and was spoiled for choice on the bee friendly flowers in the borders.

My only small complaint was that the labelling of the plants was variable but I suppose the gardeners are working towards the upkeep and beauty of the gardens – not trying to sell the plants.  However, at the base of this tree was a large plaque announcing that it was a Sophora japonica. I was initially extremely surprised as I had never heard of the Sophora producing beautiful red berries.

However, taking a step to the rear I realised I had got a little too close and the real Sophora was hiding behind.  A Google search at home indicates that it is Lonicera Maackii or Amur honeysuckle which produces these attractive red berries.  This is an Asian species which has become invasive in some parts of the U.S.A.  I found the berries very beautiful and the flowers are rich in nectar.

You could not miss the enormous American Black Walnut tree at this time of year as it was impossible to walk near it without sliding on the walnuts.  I noticed that the fruits were smaller than our walnuts and the outer coatings were more yellow. 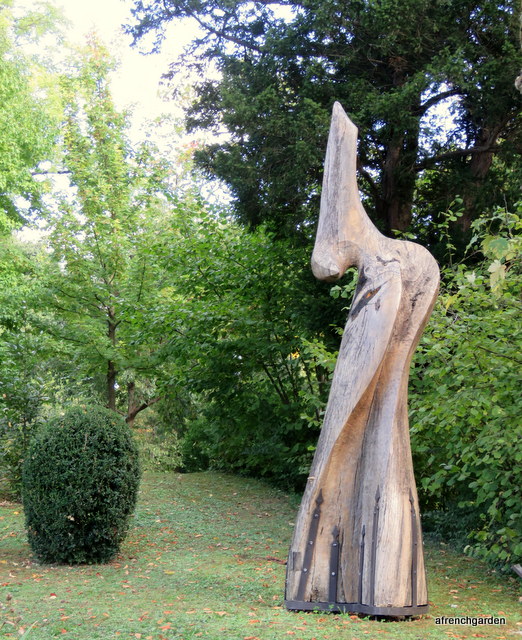 In December 1999 France was hit by a catastrophic storm which caused immense damage and 288 trees were lost in the garden.  This statue called “Instinct” was carved from a fallen green oak tree that had lived for two hundred years.  A fitting tribute to the memory of the trees lost in the storm.

I was so pleased to see the garden planted with such thought for the pollinators but it also gave me pause for thought.

There were lots of little blue butterflies on the Erigeron. 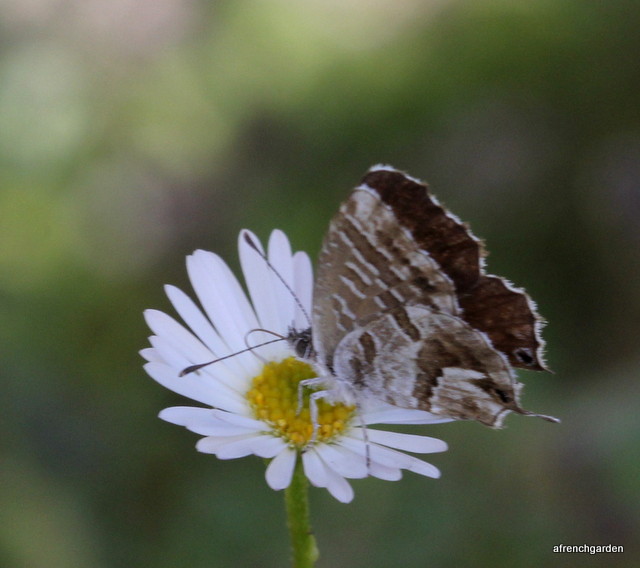 I think they may have been Lang’s short tailed blue butterflies ( Leptotes pirithous) but I am not sure.  What I do know is that I have masses of Erigeron that self seeds in every nook and cranny in my garden and although it looks pretty I have never seen a bee or butterfly on the flowers.  I wonder if it is the sole butterfly that likes Erigeron?

I will make a point of returning in the spring as many of the bedding plants were perennial and it was too late in the season to see them all to their advantage.

Cognac’s park provides ample room for everyone to enjoy the usual space for playing, running and other activities so well provided for in parks.