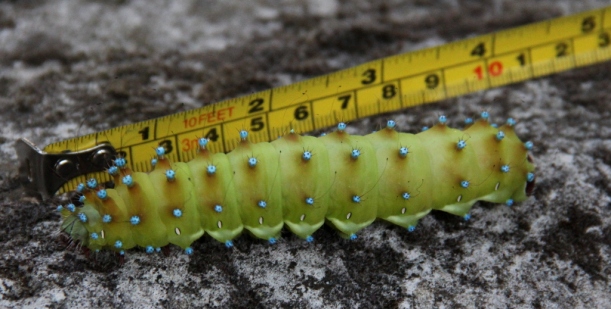 A couple of evenings ago I went out into the back garden to do a bit of watering and as I reached to turn on the hose I noticed something crawling along the wall in front of my eyes.  I did a double take as I had never seen anything like it before.  A few shouts and the whole household was roused to come and see what I had found.

Saturnia pyri from the front

It was not only its size that was astounding, 10 cm., but the blue baubles made it look very unreal.

Saturnia pyri from the rear

I wasn’t able to get good pictures because of the poor light and the steady progress it was making along the wall.

Saturnia pyri on the move

I had a good idea what it might be as I had seen photographs of the huge moths that can be seen in the area.

For pictures of the adult moth and more information from Wikipedia please click on the links.  The moths fly from April to June so I presume the caterpillars must over winter in pupal form and my caterpillar did seem dead set on getting somewhere quickly, so it must have been searching for a convenient place to over winter.

The caterpillars feed on tree leaves and it appeared to have dropped out of our apricot tree.  The next day I started to search for leaves with large holes or even whole branches denuded!  However, when I looked up into the branches of the apricot tree I found something else.

The apricot tree was already being used by the Ring doves to nest in and I hadn’t noticed.  Not the most beautiful babies, perhaps I could label them “cute” if I was in a charitable mood.  I had to give up on my search for traces of the caterpillar’s passing.