It’s the end of September and the garden is looking good after a week of really heavy rain in the first part of the month.  It was the rain that puts a smile on gardeners faces and it fell mostly at night time with the daytime temperatures staying pleasantly warm.

Kourosh’s half price Maya the bee seeds are still attracting the bees.

In general the Cosmos are doing a lot to provide lots of colour at this time of year.

I lost my Heptacodium jasminoides last year and was quite shocked that it could have left me as I had bought it in 2007.  However, last autumn I replaced it with the same species but called the alternative name Heptacodium micanioides.  It has flowered in its first year with me so I should be happy but it does not seem to be quite the magnet that the other one was for the bees.

It’s flowers are still as beautiful and perfumed – it just has a bit of growing up to do.

On the right of the Heptacodium is one of my Sedums.  I have several of these in the garden and they are excellent, colourful, easy plants to grow – only the bees are totally uninterested in them.  Would someone please recommend a large Sedum that will attract the bees?

My next disappointment is on the left of the Sedum – a red Gaura (Siskiyou Pink).  It just does not have the pull for the bees as my white ones.

Just comparative, the bees will still come and relieve the flowers of their pollen.

Enough complaining!  I am still enchanted with my Flower of an Hour (Hibiscus trionum).

It looks good whether you view it from the front or from the back!

I don’t go too much for very fancy flowers and I think my sister notices this on her visits.  Her tastes are more flamboyant and she tries to spice up the garden by tempting me with a new seed or plant.  This Dahlia is from a packet of seeds she shared with me called “Yanky Doodle Dandy”.  Actually some of them are not bad and they leave the centre open for the pollinators so I cannot complain.

The rain brought on a new flush of raspberries.  I find these yellow Fallgold sweeter than the pink ones. 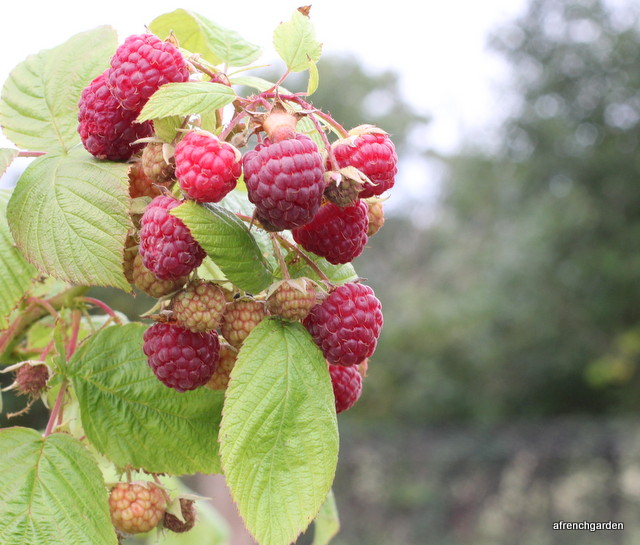 But for decoration or desserts the pink ones do look better on a plate.

The bees don’t seem to have a preference.  They must produce tasty nectar as the flowers are visited every morning.

Kourosh has moved two of the hives further back in an attempt to take them more out of the sun.  It is only a partial success as they are facing the morning sun.  As you can see, the net is still being well used to trap the hornets.  There is still no let up from their constant attack.

The scent of ivy flowers is ever present when we walk around here but we do not notice a lot of ivy pollen going into the hives.  There is a lot of wild mustard flowers (Sinapis arvensis) around and some of the pollen matches that.  The Ivy bee (Colletes hedera) gathers almost solely the ivy pollen.  I saw this female at the same nest site as I had seen last year (https://beesinafrenchgarden.wordpress.com/2014/10/12/la-bourgade-revisited/).  It is just as extensive as it was but not as busy.  The whole area had been soaked by a week of heavy rain just at the time that the males would normally leaving the nests.

The heavy rain that brought relief to the garden and brought out the flowers in abundance was perhaps not so well timed for the Ivy bees.

40 thoughts on “The end of September”